It’s not all that easy to call KnuEdge a startup. Created a decade ago by Daniel Goldin, the former head of the National Aeronautics and Space Administration, KnuEdge is only now coming out of stealth mode. It has already raised $100 million in funding to build a “neural chip” that Goldin says will make data centers more efficient in a hyperscale age.

Goldin, who founded the San Diego, California-based company with the former chief technology officer of NASA, said he believes the company’s brain-like chip will be far more cost and power efficient than current chips based on the computer design popularized by computer architect John von Neumann. In von Neumann machines, memory and processor are separated and linked via a data pathway known as a bus. Over the years, von Neumann machines have gotten faster by sending more and more data at higher speeds across the bus as processor and memory interact. But the speed of a computer is often limited by the capacity of that bus, leading to what some computer scientists to call the “von Neumann bottleneck.” IBM has seen the same problem, and it has a research team working on brain-like data center chips. Both efforts are part of an attempt to deal with the explosion of data driven by artificial intelligence and machine learning.

Goldin’s company is doing something similar to IBM, but only on the surface. Its approach is much different, and it has been secretly funded by unknown angel investors. And Goldin said in an interview with VentureBeat that the company has already generated $20 million in revenue and is actively engaged in hyperscale computing companies and Fortune 500 companies in the aerospace, banking, health care, hospitality, and insurance industries. The mission is a fundamental transformation of the computing world, Goldin said.

“It all started over a mission to Mars,” Goldin said.

Above: KnuEdge’s first chip has 256 cores.

Back in the year 2000, Goldin saw that the time delay for controlling a space vehicle would be too long, so the vehicle would have to operate itself. He calculated that a mission to Mars would take software that would push technology to the limit, with more than tens of millions of lines of code. 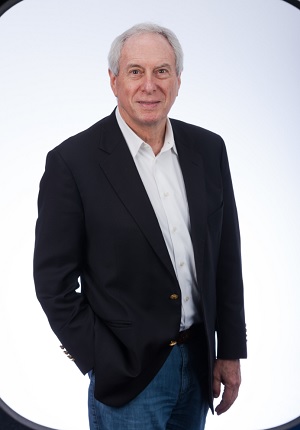 Above: Daniel Goldin, CEO of KnuEdge.

“I thought, holy smokes,” he said. “It’s going to be too expensive. It’s not propulsion. It’s not environmental control. It’s not power. This software business is a very big problem, and that nation couldn’t afford it.”

So Goldin looked further into the brains of the robotics, and that’s when he started thinking about the computing it would take.

Asked if it was easier to run NASA or a startup, Goldin let out a guffaw.

“I love them both, but they’re both very different,” Goldin said. “At NASA, I spent a lot of time on non-technical issues. I had a project every quarter, and I didn’t want to become dull technically. I tried to always take on a technical job doing architecture, working with a design team, and always doing something leading edge. I grew up at a time when you graduated from a university and went to work for someone else. If I ever come back to this earth, I would graduate and become an entrepreneur. This is so wonderful.”

Back in 1992, Goldin was planning on starting a wireless company as an entrepreneur. But then he got the call to “go serve the country,” and he did that work for a decade. He started KnuEdge (previously called Intellisis) in 2005, and he got very patient capital.

“When I went out to find investors, I knew I couldn’t use the conventional Silicon Valley approach (impatient capital),” he said. “It is a fabulous approach that has generated incredible wealth. But I wanted to undertake revolutionary technology development. To build the future tools for next-generation machine learning, improving the natural interface between humans and machines. So I got patient capital that wanted to see lightning strike. Between all of us, we have a board of directors that can contact almost anyone in the world. They’re fabulous business people and technologists. We knew we had a ten-year run-up.”

But he’s not saying who those people are yet.

KnuEdge’s chips are part of a larger platform. KnuEdge is also unveiling KnuVerse, a military-grade voice recognition and authentication technology that unlocks the potential of voice interfaces to power next-generation computing, Goldin said.

While the voice technology market has exploded over the past five years due to the introductions of Siri, Cortana, Google Home, Echo, and ViV, the aspirations of most commercial voice technology teams are still on hold because of security and noise issues. KnuVerse solutions are based on patented authentication techniques using the human voice — even in extremely noisy environments — as one of the most secure forms of biometrics. Secure voice recognition has applications in industries such as banking, entertainment, and hospitality.

KnuEdge says it is now possible to authenticate to computers, web and mobile apps, and Internet of Things devices (or everyday objects that are smart and connected) with only a few words spoken into a microphone — in any language, no matter how loud the background environment or how many other people are talking nearby. In addition to KnuVerse, KnuEdge offers Knurld.io for application developers, a software development kit, and a cloud-based voice recognition and authentication service that can be integrated into an app typically within two hours.

And KnuEdge is announcing KnuPath with LambdaFabric computing. KnuEdge’s first chip, built with an older manufacturing technology, has 256 cores, or neuron-like brain cells, on a single chip. Each core is a tiny digital signal processor. The LambdaFabric makes it possible to instantly connect those cores to each other — a trick that helps overcome one of the major problems of multicore chips, Goldin said. The LambdaFabric is designed to connect up to 512,000 devices, enabling the system to be used in the most demanding computing environments. From rack to rack, the fabric has a latency (or interaction delay) of only 400 nanoseconds. And the whole system is designed to use a low amount of power.

All of the company’s designs are built on biological principles about how the brain gets a lot of computing work done with a small amount of power. The chip is based on what Goldin calls “sparse matrix heterogeneous machine learning algorithms.” And it will run C++ software, something that is already very popular. Programmers can program each one of the cores with a different algorithm to run simultaneously, for the “ultimate in heterogeneity.” It’s multiple input, multiple data, and “that gives us some of our power,” Goldin said. 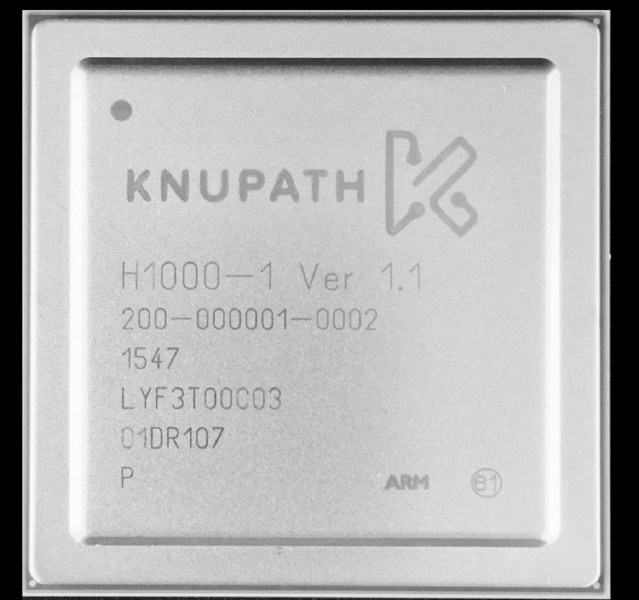 “KnuEdge is emerging out of stealth mode to aim its new Voice and Machine Learning technologies at key challenges in IoT, cloud based machine learning and pattern recognition,” said Paul Teich, principal analyst at Tirias Research, in a statement. “Dan Goldin used his experience in transforming technology to charter KnuEdge with a bold idea, with the patience of longer development timelines and away from typical startup hype and practices. The result is a new and cutting-edge path for neural computing acceleration. There is also a refreshing surprise element to KnuEdge announcing a relevant new architecture that is ready to ship… not just a concept or early prototype.”

Today, Goldin said the company is ready to show off its designs. The first chip was ready last December, and KnuEdge is sharing it with potential customers. That chip was built with a 32-nanometer manufacturing process, and even though that’s an older technology, it is a powerful chip, Goldin said. Even at 32 nanometers, the chip has something like a two-times to six-times performance advantage over similar chips, KnuEdge said.

“The human brain has a couple of hundred billion neurons, and each neuron is connected to at least 10,000 to 100,000 neurons,” Goldin said. “And the brain is the most energy efficient and powerful computer in the world. That is the metaphor we are using.”

KnuEdge has a new version of its chip under design. And the company has already generated revenue from sales of the prototype systems. Each board has about four chips.

As for the competition from IBM, Goldin said, “I believe we made the right decision and are going in the right direction. IBM’s approach is very different from what we have. We are not aiming at anyone. We are aiming at the future.”

In his NASA days, Goldin had a lot of successes. There, he redesigned and delivered the International Space Station, tripled the number of space flights, and put a record number of people into space, all while reducing the agency’s planned budget by 25 percent. He also spent 25 years at TRW, where he led the development of satellite television services.

KnuEdge has 100 employees, but Goldin said the company outsources almost everything. Goldin said he is planning to raised a round of funding late this year or early next year. The company collaborated with the University of California at San Diego and UCSD’s California Institute for Telecommunications and Information Technology.

With computers that can handle natural language systems, many people in the world who can’t read or write will be able to fend for themselves more easily, Goldin said.

“I want to be able to take machine learning and help people communicate and make a living,” he said. “This is just the beginning. This is the Wild West. We are talking to very large companies about this, and they are getting very excited.”

A sample application is a home that has much greater self-awareness. If there’s something wrong in the house, the KnuEdge system could analyze it and figure out if it needs to alert the homeowner.

Goldin said it was hard to keep the company secret.

“I’ve been biting my lip for ten years,” he said.

As for whether KnuEdge’s technology could be used to send people to Mars, Goldin said. “This is available to whoever is going to Mars. I tried twice. I would love it if they use it to get there.”