Functionize, a San Jose, California-based startup developing a cloud-based platform that autonomously susses out software bugs, today announced that it has raised $16 million in series A financing contributed by Canvas Ventures. The capital infusion — which comes after a $2.5 million seed round in February 2018 and brings the company’s total raised to $18.2 million, according to Crunchbase — will be used to “accelerate adoption” of its platform, said CEO and founder Tamas Cser.

“Software testing has endured what I term a ‘QA winter,'” Cser, who cofounded Functionize with Ray Grieselhuber in 2015, said. “This means developers and testers still maintain tests the same way as they did in the early ages of the internet. [Functionize’s solution] allows testing to just work — empowering testers to dramatically speed up product delivery.”

Functionize’s software as a service (SaaS) integrates with DevOps platforms like Bamboo, Jenkins, and AWS CodePipeline, and leverages natural language processing to enable developers to type out tests in plain English, which it converts into test cases. The tests are configurable to a degree — devs can specify things like region, orientation, and resource type — and they probe a range of features including API calls, two-factor authentication, cookie storage, and invisible elements. Moreover, thanks to proprietary computer vision algorithms trained on “thousands” of data points, they update in response to UI changes, preventing them from breaking if, say, an element is moved to another part of a page. 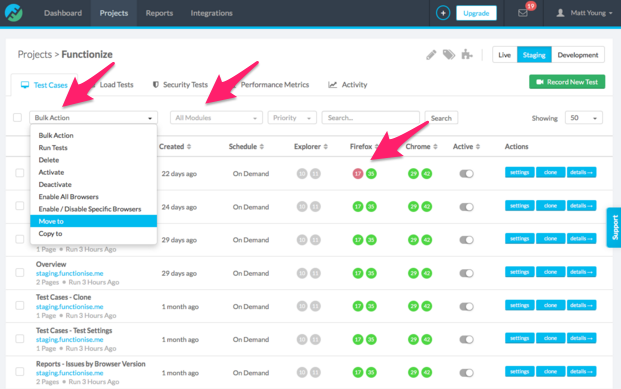 At the conclusion of each test, Functionize spits out a performance table (segmented by browser, device, and environment) containing DNS lookup times, page load speeds, and a proprietary visual performance metric Functionize calls “visual completion,” which attempts to model the timing thresholds of “every aspect” of the user experience. It additionally generates a geographic overview of insights from all of the company’s available testing servers, and graphs illustrating page speed and historical load times by connection type, page, and region.

Cser says that Functionize can execute up to “thousands” of tests in minutes in virtual machines across browsers (like Chrome, Safari, Firefox, and Edge) and operating systems (like Android and iOS), and claims that customers like Salesforce, Hyundai, Agvance, TOTVS, and Zenefits have reductions in test time creation and maintenance time by up to 90 percent and 75 percent, respectively.

“Our customers are technology leaders which see the wisdom and power of a ‘cloud-first’ testing strategy,” he said. “Artificial Intelligence requires significant computing power and the cloud allows you to harness this.”

Needless to say, Functionize has a lot of competition. But that didn’t frighten away Canvas Ventures’ Gary Little.

“I have been an active investor in the enterprise software industry over the last 20 plus years. I recently became convinced that the quality assurance software development market was ripe for disruption,” he said. “I could see this in my own portfolio companies. In seeking out an investment in the most innovative company, I found Functionize and quickly became convinced it had the most compelling solution to the market need.”