Microsoft, Facebook, and Google’s TensorFlow maintain open source projects on GitHub with the largest number of contributors, according to the 2018 Octoverse report, a veritable State of the Union address by GitHub for the world’s community of developers.

The GitHub platform for project management and open source collaboration has been used by more than 31 million developers in the past 12 months, up from 24 million last year.

Microsoft’s Azure Docs, Facebook’s PyTorch, and the Godot game engine from MIT claimed the top spots for the fastest-growing open source projects in the past 12 months, while Microsoft, Google, Redhat, and University of California, Berkeley are the organizations whose employees are most likely to contribute to GitHub projects.

Microsoft acquired GitHub for $7.5 billion in June. The deal is expected to close by the end of the year.

In total, 2.1 million organizations are using GitHub, up more than 40 percent from 1.5 million in the 2017 report.

A series of new offerings for GitHub — including Actions, which head of platform Sam Lambert calls the biggest change to GitHub since the introduction of the pull request — were announced onstage at the GitHub Universe conference being held today in San Francisco.

Among the more than 96 million repositories, hosted by one of the most popular platforms for developers in the world, about one-third were created within the past year.

The United States, China, and India are the three countries with the highest number of total contributors, while Brazil moved from the 10 spot to 7 in most contributors this year.

Algeria is growing fastest by number of repositories created, while Egypt leads the way in the highest number of open source repositories.

One of the most drastic changes in programming languages used on GitHub was the move of TypeScript to the eighth most popular language on the platform, while Ruby continues its slide from 5th place in 2015 to 10th place in 2018.

JavaScript and Java continue to be the most popular coding language used for GitHub projects.

Learning Lab for GitHub was shipped earlier this year, and thus far 1.1 million people have used GitHub for skills training. 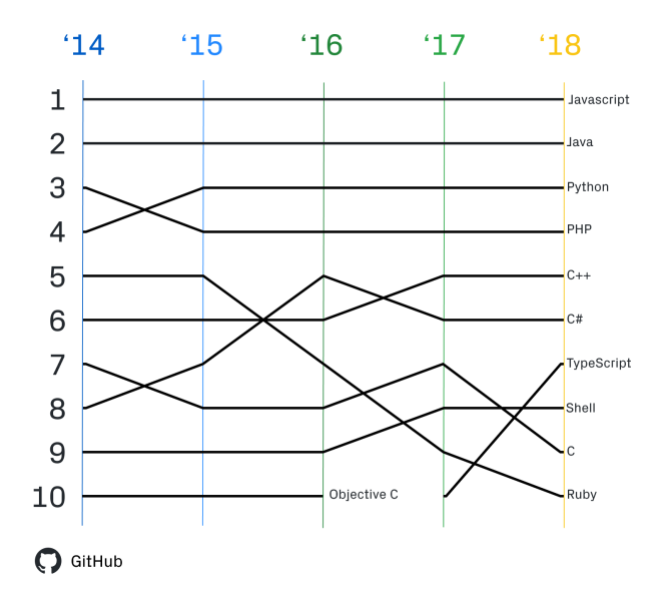