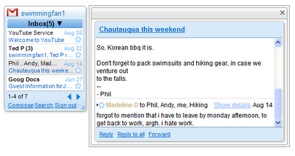 A new post on the Gmail blog said Google is announcing “Gmail on your Desktop,” but it’s not what you think — at least, it wasn’t what I thought. It sounded like Google might finally release the long-rumored Google Gears support for Gmail, eliminating the last major barrier to Gmail adoption by allowing users to access their emails offline (though that functionality is already supported through email programs like Thunderbird). Alas, it turns out that the desktop in question is Google Desktop, the downloadable application that lets you search and add Google Gadgets to your computer.

Despite my initial disappointment, the Gmail gadget actually looks pretty useful. Basically, it runs Gmail in a small window on your desktop so that you can see new messages as they come in without leaving Gmail open in a separate browser tab. As Google points out, that’s particularly useful for folks (like me) who have multiple Gmail accounts — a personal Gmail address and a work address through Google Apps, for example. In fact, it’s useful enough to finally persuade me to download Google Desktop.

Or rather, it would — except that it only works on Windows. Presumably, Mac support will follow, but jeez, way to break my heart all over again.