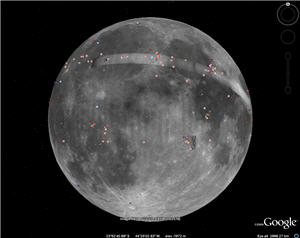 Celebrating the 40th anniversary of Neil Armstrong’s first step on the moon, Google today released a new version of its Google Earth exploratory software that includes a map of the Moon with enough goodies to tie you up for hours. Google’s clickable data not only includes photos and videos, but also short stories about the Apollo missions’ activities on the Moon and some of the more intriguing facets of the Moon’s surface.

To get the new Moon map, download Google Earth and install it. When the program starts, look for the planet icon in the top menu bar. The options on the menu are Earth, Sky, Mars and Moon.

The Moon map is dotted with dozens of clickable spots. Clicking on them brings up details about the lunar surface, such as the Lambert R crater. The Moon is riddled with a mix of volcanic craters and meteor impact craters.

The surprise in Google’s lunar map is that many of the photos were taken by Apollo missions 35 to 40 years ago. Flying close to the Moon with none of Earth’s atmosphere to fuzz up the picture, Apollo astronauts were able to take photos that would be impossible from Earth. Below is a photo from the Sea of Rains taken at an oblique angle so that the three-dimensional nature of the surface is readily apparent. 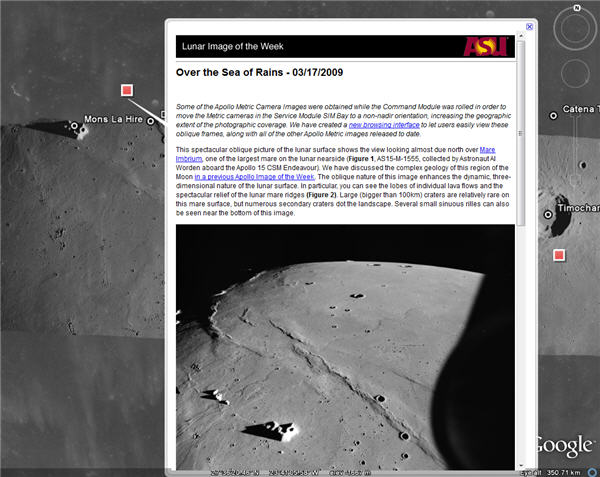 Google also includes HDTV videos from the Japanese spacecraft Kaguya. Below is Kaguya’s pass over the Apollo 17 landing site in 2007. It’s a timely reminder that 40 years ago, when the personal computer and the internet were only bright ideas in the minds of a few renegade thinkers, Americans built rockets capable of going to the Moon.