After nearly a year in beta, Google today announced that its Slack-competing Hangouts Chat platform is ready for prime time.

The internet giant announced last March that it was splitting its Hangouts communications platform in two, with Hangouts Chat bringing messaging and collaboration smarts to teams, and Hangouts Meet focused squarely on video conferencing. The former has hitherto remained a private beta product, but from today Google is rolling it out for all G Suite users.

Hangouts Chat is entering a busy field. Besides the perennially popular Slack, other notable incumbents include Workplace by Facebook, Cisco Spark, and, of course, Microsoft Teams. The latter launched back in 2016 and is included in Office 365 subscriptions, though reports surfaced this week that Microsoft is mulling a free version of the software.

As a long-standing player in the online communications realm, however, Google’s Hangouts Chat is a notable addition to the team collaboration mix. 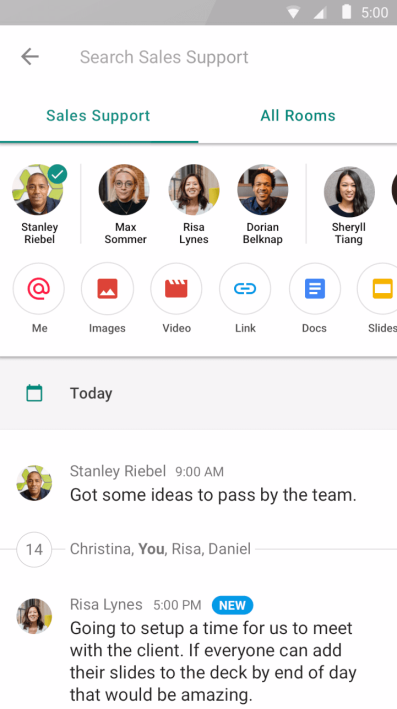 While it integrates with the broader G Suite toolset — including Calendar, Drive, and the aforementioned Hangouts Meet brethren — Hangouts Chat also works with third-party apps.

Though Google is encouraging companies to build their own bots and create customized automations, Hangouts Chat also comes with its own G Suite bots, including @Drive and @Meet, which helps schedule meetings on your behalf.

To avoid a string of emails being sent between various individuals, the @Meet bot can, for example, scan different calendars to identify the best time to schedule a meeting and make suggestions accordingly. 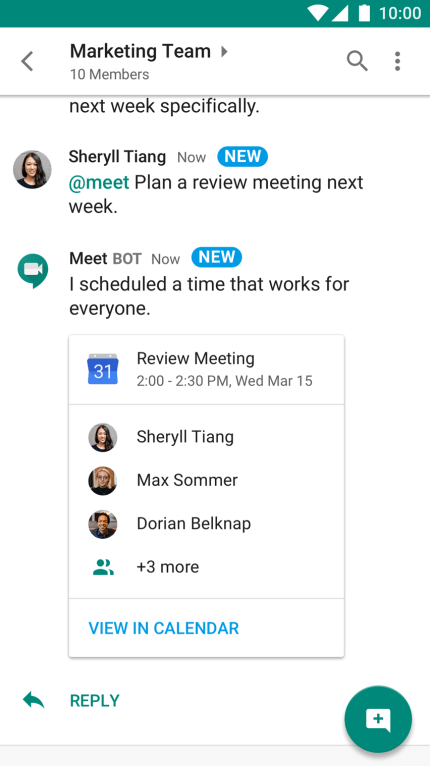 As noted previously, Google split Hangouts into two distinct products last year. And although Hangouts Chat has remained under the radar, Hangouts Meet has received a fair bit of attention over the past 12 months. Back in October, for example, Google announced the $2,000 Hangouts Meet video-streaming kit, which included a touchscreen, speaker mic, camera, and Chromebox. Last month, the company extended Hangouts Meet video call support to tablets.

But although the two Hangouts products have been evolving separately, now that Hangouts Chat is publicly available, Google is bringing them together via tight integrations. This means you will be able to set up and participate in a video conference call from within Hangouts Chat.

Over the next few months, the company said that Calendar will be updated to use artificial intelligence (AI) and suggest available rooms and spaces for you to reserve in your workplace. It will consider factors such as the building, floor number, booking history, and equipment needs when making suggestions. In effect, Hangouts Chat will soon be able to not only suggest when to meet, but help you arrange where to meet, as well.

With this feature added to Docs, teams will be able to see related files from within Google Drive and easily include relevant information from other documents. 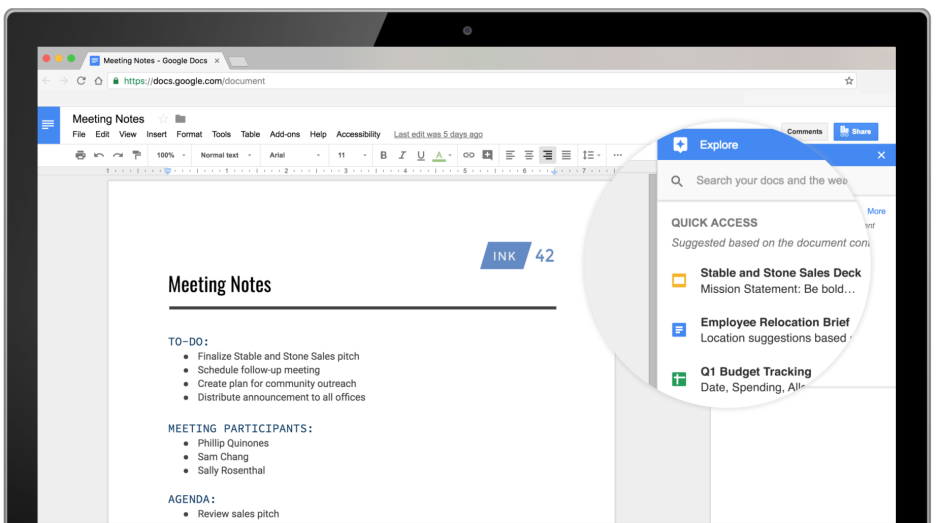 For now, Hangouts Chat will be available to companies as part of their G Suite subscription. But with rumors that Microsoft is preparing to launch a free version of the Teams product that lives outside of Office 365 accounts, and the likes of Facebook and Cisco offering (limited) free versions of their respective collaboration suites, it will be interesting to see whether Google makes Hangouts Chat available outside of a G Suite subscription.

A spokesperson did confirm that in the near future Google will add a special “guest access” feature to Hangouts Chat, which suggests that part of it will be opened to non-G Suite users, though the spokesperson didn’t elaborate.