Google is introducing a handful of new privacy-focused tools today, as Google CEO Sundar Pichai vowed in a blog post that the company’s products should only keep information “for only as long as it’s useful and helpful to you.”

Among the new features is default auto-delete functionality. Last May, Google introduced a new tool that allows users to automatically delete their location and search history data. From inside their Google Account, users could dictate that Google should delete their history after three months or 18 months, and the company later expanded this feature to YouTube too. From today, Google will make auto-delete the default for some users.

The user can change these defaults in their settings, so that auto-delete is deactivated completely or that the time-frame is set to three months.

It’s also worth noting here that those who already have their location history, web and app activity, and YouTube history turned on won’t have any of their settings changed — but Google said that it will “actively remind” them about the auto-delete option through in-app alerts and emails.

Elsewhere, Google is also making it easier to access incognito mode. Indeed, incognito mode has been baked into Chrome browser for more than a decade, but in 2018 the company added it to YouTube, followed by Google Maps a year later, allowing users to temporarily stop their search activities from being saved to their Google Account. Starting from today in the Google app for iOS, with Android following later, users can access incognito mode by long-pressing their profile picture in Search, Maps, and YouTube. Prior to now, it could only be accessed through clicking through to the main menu that sits behind the profile photo.

Additionally, Google said that it’s working on a tool that will make it possible to remain in incognito mode across all Google apps, though it stopped short of revealing how this will work or when it will be available.

Above: Activating incognito mode by long-pressing the account profile picture

Other updates include a new mechanism for accessing Google Account controls from inside Google Search. For example, a user will soon be able to search for “Google privacy checkup” to bring up a user-specific dialog box that guides them through the process of tweaking their settings. 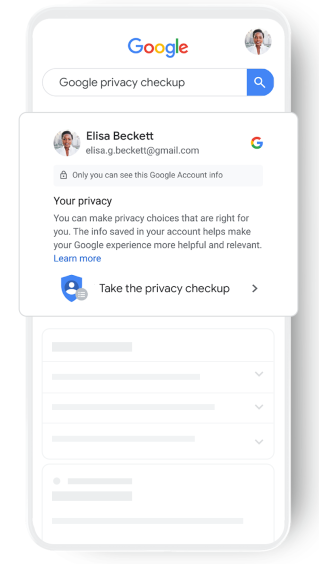 Above: Google Search for settings

Google also announced that it’s sunsetting its Password Checkup chrome extension — launched last year — in the coming months and making it part of its Security Checkup service, which it first introduced back in 2015. Password Checkup warns users if their login credentials for any website have been involved in a data dump. Google said more than 100 million people have used the feature since it launched for Chrome as an add-on last February. In the intervening months, Password Checkup was baked directly into Chrome and into Google’s password management tool that’s available for all accounts, meaning that there is no real need for it to exist as a standalone Chrome extension.

Finally, back in September Google open-sourced its differential privacy library, which is concerned with garnering value from big data while maintaining the privacy of people whose data is being used. At first, the library was limited to C++, but Google confirmed today that it’s expanding it to additional programming languages, including Java and Go.