Ever since R2-D2 projected a hologram of Princess Leia in the original Star Wars, holographic displays have been a key element in science fiction, spending decades as too futuristic to commercialize anytime soon. Yet as we kick off 2021, a full-color holographic face is actually floating in the middle of my office desk, a clear sign that the long-nascent 3D display technology is ready to go mainstream, impacting everything from communications to data visualization and gaming.

Thanks to Looking Glass Factory, a company based in Brooklyn and Hong Kong, the face on my desk looks more realistic and three-dimensional than the ghostly Leia. She’s being displayed on a prototype version of Looking Glass Portrait, a 7.9-inch holographic display with the sort of intangible magic that defined Apple’s “impossibly thin” iPads last decade. People and objects appear so convincingly 3D inside the screen that you can see different details as you move your head or rotate the display. They’re not just static photos, either: Many of Looking Glass’ samples are fluidly animated, demonstrating Portrait’s ability to facilitate holographic video calls with 3D people or create lively, dimensional data visualizations, rather than flat bar charts like the one above.

Holographic displays are significant to technical decision makers because they enable the next major transformative technology: spatial computing. While companies such as Apple, Facebook, Google, Magic Leap, Microsoft, and Nreal have struggled to squeeze holographic optics into wearable headsets, Looking Glass has spent six years developing enterprise-class 3D screens that can sit alongside or replace computer monitors. Early models were marketed towards creative professionals, but Looking Glass is working to address larger groups of users, while inspiring more developers to create holographic apps and content. Now any company with volumetric 3D visualization needs can finally afford to put a holographic screen on a desk — or on every desk in an office — which should spur new demand and use cases alike.

Priced at only $349, Portrait is the company’s smallest and most affordable holographic screen yet. It doesn’t require glasses or head-tracking cameras, yet offers an impressively realistic sense of 3D depth, such that objects appear to have actual volume and can also be seen by multiple people from different angles at once. The latter point is a major differentiator compared with Sony’s Spatial Reality Display, which sells for more than twice as much and made headlines late last year.

Though Looking Glass is several months away from shipping the first Portraits to early adopters, the prototype unit I tested offers more than a tease of what customers will receive in April; it looks and feels as complete as most companies’ finished products. Dimensionally, it’s roughly the same as a 5-by-7 photograph that varies from one to two inches in thickness, not counting its detachable base. Yet the box is concave, with mirrors on the inner edges, and you can choose to display content either with or without edge lighting, a feature that distracts from jagged pixels that might otherwise be evident at the screen’s edges. 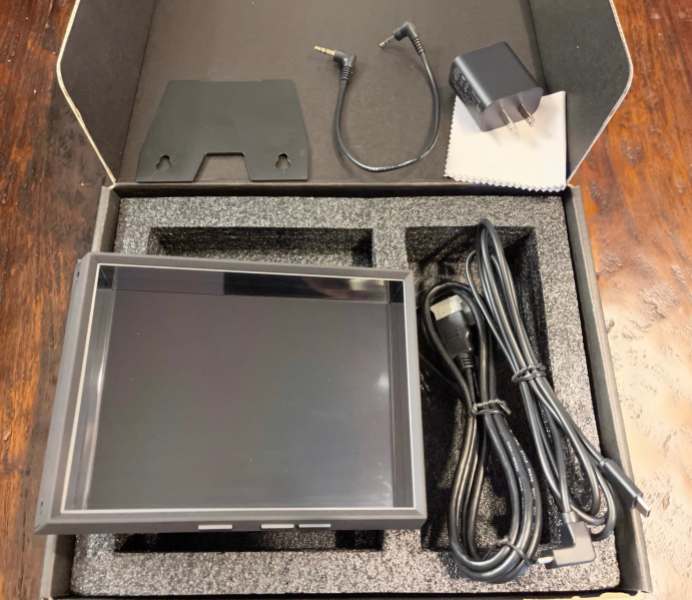 Portrait’s right side sports three capacitive touch buttons that can usefully be thought of as “forward,” “backward,” and “play/pause” controls, plus physically depressible power and five-level edge lighting buttons. USB-C, HDMI, and 3.5mm audio ports are recessed on the left side, while the rear is ventilated — presumably to regulate the temperature of an integrated Raspberry Pi 4, which enables Portrait to play back pre-loaded sample photos and videos. The Pi hardware isn’t user accessible in the prototype, but you’ll be able to store your own content on the final device, as well as connect it to a computer for more sophisticated apps. 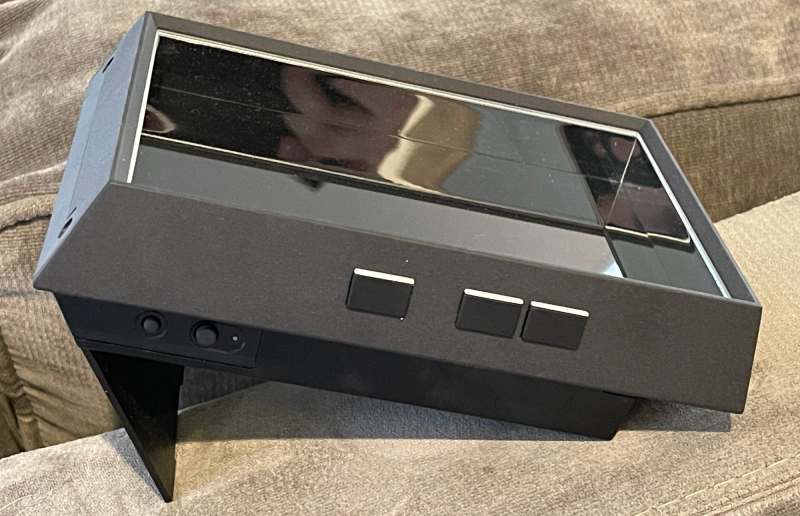 The basic version of Portrait will include a USB-C cable, USB-C wall adapter, HDMI cable, and short 3.5mm audio cable for attaching to your own speakers. If you’re willing to spend $1,099, Looking Glass offers a “Holographic Capture” bundle that includes Microsoft’s Azure Kinect depth camera, a custom stand, a camera rail for shooting light field photos, a Leap Motion controller, and a carrying case. This package adds both interactivity and creative tools for those who are interested in making and interacting with holographic content rather than just passively consuming it, though even the starter package will include support for Unreal, Unity, Blender, Maya, and other 3D software integrations, as well as a depth recording app that can work with common devices such as iPhones.

My prototype unit is limited to serving as a playback device for demo content that was supplied by Looking Glass. Several iPhone 11 Pro and iPhone 12 Pro Max depth-encoded images I sent for testing were also pre-installed on the unit, but no software was included to let me add or adjust content on my own — a limitation that won’t exist on final Portrait devices.

Traditional 2D displays look best when viewed straight on, but Looking Glass Portrait is designed to be viewed from multiple angles and has a 58-degree horizontal viewing cone — comparable to many 2D monitors. The display fades to a mirrored black when viewed wider left or right than that, and the 3D effect flattens when seen from steep above or below angles, but the sweet spots are neither shallow nor problematic, even with multiple simultaneous viewers. While the screen’s colors and brightness can’t be tweaked, they’re vivid even in a well-lit room without adjustment, and the apparent resolution is similar to the first iPad mini. As you can see from the screens here, the details aren’t quite “Retina display” level, but more than good enough for an affordable, first-generation product. 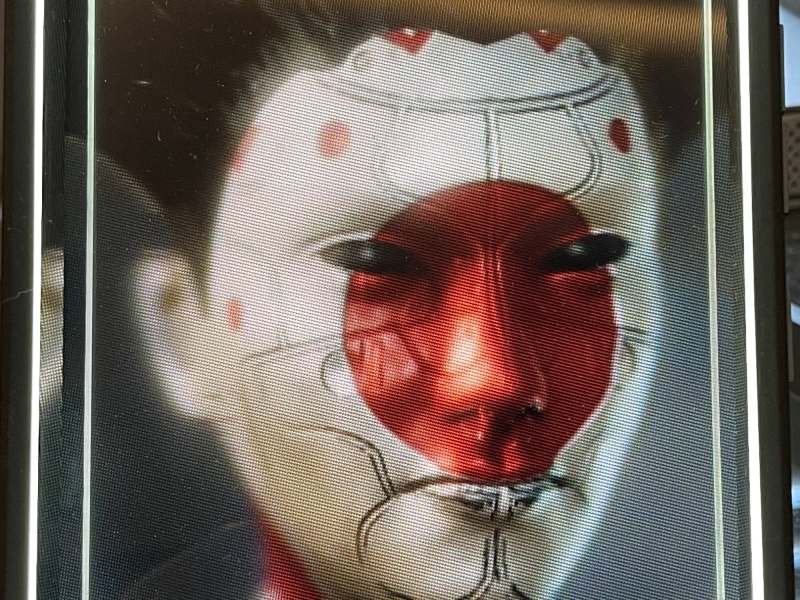 The three-dimensional holographic system Portrait uses isn’t a parlor trick, like floating one or two 2D layers in front of another and calling their parallax effect “3D.” In one still image, a man with a hat and glasses — Looking Glass Factory CEO Shawn Frayne — peers out at you through a magnifying glass, and the content is akin to Lytro’s light field photography, displaying detail that differs depending on your personal viewing angle.

As I turn Portrait left and right, you can see the magnifying glass obscuring less or more of his face, reflections changing in both the magnifier and his glasses, and the pattern on his hat becoming obvious. In other images, snapped by iPhones, the 3D effect is still there but not as pronounced, hinting at the critical roles that depth camera data, the aforementioned camera rail hardware, and 3D rendering software will play in creating particularly convincing holographic visuals.

When visualizing people, objects, and scenes, the holographic technology’s potential is obvious, and there’s no question in my mind that Portrait will have plenty of uses across those common scenarios. But enterprises are still in the early days of leveraging mixed reality for data visualization, and that use case will require custom apps, as well as businesses capable of understanding holographic technology’s potential.

Looking Glass’ demo content only hints at some of the possibilities here. In one demo video, an animated box of elastic balls looks so deep in person that you’ll want to reach into the screen and touch them — if you have the Leap Motion controller and the app the demo was based upon, this will actually be possible. Another demo video shows a fluidly moving tangle of colored strings, as if a killer squid from Edge of Tomorrow was assembled from Excel bar chart parts. A third demo shows light sources dancing across the surface of an ominous metallic animal as it rotates in 3D. The extent to which content is abstract or photorealistic, interactive or non-interactive, will depend wholly upon the creator’s vision and talents.

It’s clear that if something looked good in a flat photo or video, it will quickly become even more compelling as a hologram, drawing you in as you study or just marvel at the details. That alone could make Portrait an amazing display device for business presentations, though I’ll be the first to tell you that the technology is distracting — in a good way. Sitting on a desk with my 2D computer monitor, iPhone, and iPad, it quickly draws the most attention, in part because the human eye is drawn to motion, and Portrait constantly caters to that as you move your head.

Several months remain before Looking Glass Portrait is officially “final,” but even at this prototype stage, this is one of the most exciting and impressively implemented technologies I’ve ever seen. I can’t wait to see how it handles more of my personally created content and third-party apps, as the holographic hardware is more performant than expected, and there’s so much potential here for software and services. If you’re interested in getting in line for the hardware, pre-orders are continuing here at a discounted price.