I got my hands on an early version of Interaxon’s brainwave reading headband, the Muse, and I think this could be the most important wearable of the year.

And that’s saying a lot, considering I’ve seen 2014’s entire lineup for health tech at the Consumer Electronic Show as well as a few undisclosed athletic devices slated for later this year.

Unless you’re a male model, your brain is the most important tool in your body shed. The Fitbits of the world are great for a trim figure, but the Muse is the only device on the market bringing cognitive enhancement to the masses.

The Muse has six sensors that detect brain waves all around the parts of the brain responsible for speech, critical thought, and listening. It rests comfortably on the ears like a heavy pair of hipster sunglasses and can be worn all day long, if necessary.

The $299 Muse has been demoed in controlled environments, but I was able to see what it’s like to explore at home. So, what can brain wave sensing tech do?

Scores of CEOs, such as Salesforce billionaire Marc Benioff swear by the powers of meditation. And medical science is close to figuring out why meditation is associated with better memory, attentiveness, and empathy. But meditation is hard to learn without dedicated practice. For the many of us who suffer from attention deficit disorder, it can be nearly impossible to master.

Neurofeedback is an established practice of computer-guided meditation that alerts the users with sights and sounds when they are producing brain waves associated with calm and focus. In essence, it’s like having the smartest yogi on the planet inside your head.

The Muse launched with a neurofeedback application, Calm, where users see a progressively less cloudy beach sunset as they become more settled and attentive. 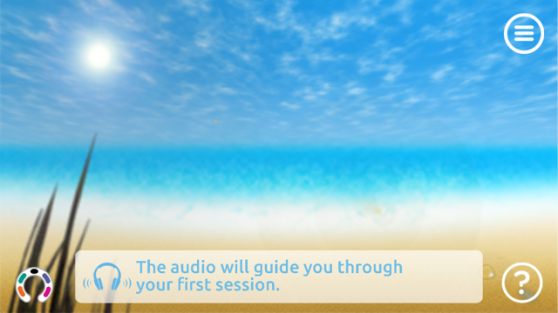 For me, neurofeedback and meditation generally feels like a gentle hit of coffee. My inner voice silences, an incessant need to rush melts away, and I just do things. Neurofeedback is one of the best things I do for my productivity, and the Muse makes it fairly easy to do regularly.

The Muse is on track to becoming the first device to seamlessly quantifying how food, sleep, and exercise impacts our mind. The impending doom of larger love handles may not dissuade many from indulging in a red velvet cupcake at lunch. But, if you know a particular food can destroy the productivity of the second half of your day, you might think twice.

Though the Muse is not yet set up to correlate behavior and cognitive performance, I did my own testing and found that it did moderately well. Below is a correlation graph of my scores on reaction-time test and the percent of time I was “calm”, as measured by the Muse.

The moderate correlation fit is admirable for such an early version of the software (for the stat nerds, it’s a correlation of -0.65 and an r-squared of 0.41. Reaction time test was measured on quantified-mind.com’s “Coding” test). 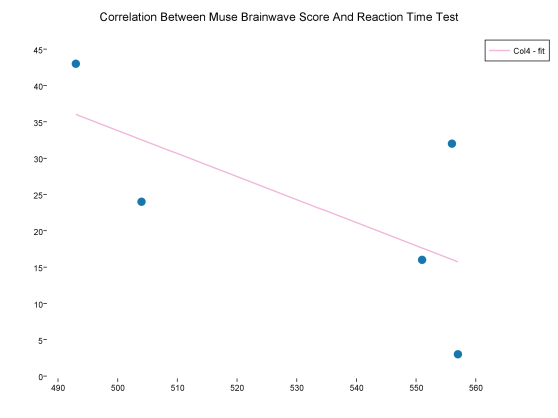 All of the health tech devices are going to want to pair with brain wave sensors. The SCiO, for instance, is a keychain sensor that measures the composition of food (nutrition and calories). Maybe there’s some hidden sugar in that Thai food that will drain your afternoon. Or, perhaps a hidden sensitivity to wheat is causing spaciness. The Muse can, theoretically, alert us to this.

And, exercise? I’ve found that 30 seconds of high-intensity exercise gives me the same cognitive boost as a cup of coffee. Someone wearing the Muse who took the stairs instead of the elevator would know that it was the added exercise that gave them an unexpected burst of calmness.

The possibilities are endless, and the opportunity for brain wave sensing tech to make us as smart as we can be is very exciting.

We’re just beginning to learn how to control computers and robots with nothing but our minds. Below is a (cheesy) video from the University of Minnesota where demonstrators navigated a drone through a Star-Fox-like obstacle course with a brain interface.

Interaxon imagines all types of brain-controlled interfaces, from in-flight entertainment to iPad games.

Brain-controlled devices have come a long way in the past 10 years. I remember one of the first commercially available brain wave video game systems, where I hooked up traditional electrodes to my head so that I could interface with a PlayStation controller. It was a mess, swabbing down my head with alcohol towelettes and attaching pasty electrodes before the thing would work.

In the last few years, other entrants, such as the Neurosky, have introduced dry sensors that require no setup and easy bluetooth connectivity. I use it almost daily in my meditation practice.

But the Muse is far more comfortable. I can’t wear the Neurosky for more than 30 minutes without getting a headache. Interaxon is also flush with over $6 million in funding to scale a community of developers to explore all sorts of brain wave applications.

The near-finished prototype I got my hands on is a significant improvement over the competition. It’s a little clunky, and I have to wipe my head down each time to get a reliable connection. But I suspect these usability kinks will be worked out soon.

Either way, the Muse is the first device that has the potential to bring brain enhancement to the masses. And that makes it the most important wearable innovation on the market this year.