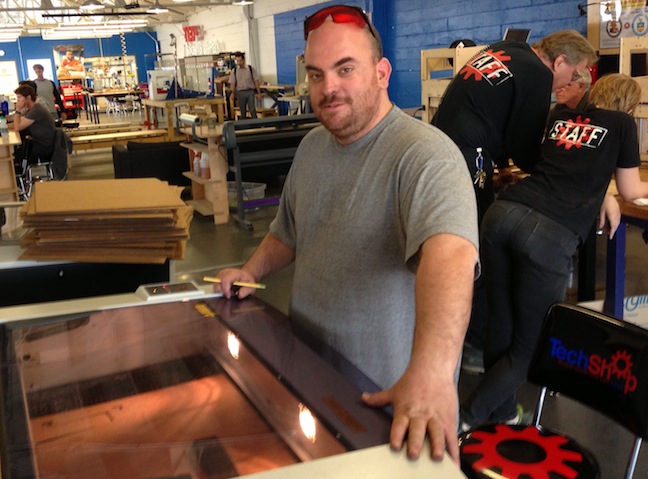 A Silicon Valley tech entrepreneur and a Hollywood actor cross paths at a coffee shop in San Francisco’s Financial District.

You’d never know by appearance alone, but one of these men will sleep on the streets tonight.

Scott Glover and Marc Roth are feeling quite comfortable at this branch of Peet’s Coffee. Roth tells me that the homeless spend hours on end in coffee shops, which offer optimal shelter on chilly days like this one. 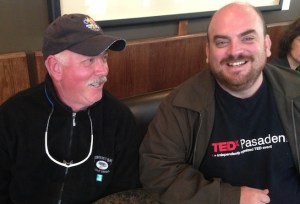 Glover is in town for a three-day gig providing protection detail at the annual Veteran’s Day Parade. His current employers don’t know he’s homeless. Roth is no longer living in shelters, but he can relate to his new acquaintance’s transience. Until last year, he was living in his car, in hostels, the BART (for one night after he missed a curfew), and in shelters around San Francisco.

But Roth is a startup founder now. And in true startup fashion, he reels off ideas for future business ventures minutes after I arrive.

His ideas are in various stages of development and include a food delivery service, a laser company, and a hardware accelerator program. But they all have one thing in common: Whatever he does next, Roth intends to hire from within the homeless community, which he views as a hotbed of untapped talent.

How did he move out of the shelter and into TechShop?

One wintery morning in 2011, Roth awoke after a rough night in a homeless shelter in San Francisco.

It was Christmas, and Roth was determined to make a change for the sake of his two kids living with their mother in Las Vegas. He had originally relocated to San Francisco to build a better life for his family, but had developed nerve damage and a condition called Meralgia Paresthetica from standing for hours on end at a pizza restaurant. This condition left him with medical bills so steep, he was soon unable to pay rent and return to his job, and he found himself on the street. 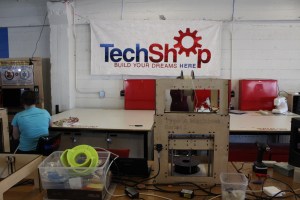 Above: A quilt and printer at San Francisco’s TechShop

When he spotted a business card for TechShop in the shelter’s garbage bin, it seemed like a sign. Intrigued, he fished it out.

TechShop, a membership-based do-it-yourself workshop, provides tools, equipment, and classes for the community. The San Francisco venue is one of the hubs of the burgeoning “maker movement,” the trend to employ DIY techniques to develop unique technology products.

For a glimpse inside TechShop, don’t miss our gallery below.

“I had these inventions in my head but didn’t know I could make them myself,” Roth explained. So he spent his remaining dollars on a membership and a few introductory courses.

Roth’s goal was to pick up basic skills like woodworking, laser cutting, CNC machining, and welding. His first core discipline was 3D printing, the process of making a solid object from a digital model, as members don’t need to pay for the materials.

This drive was born of necessity, but Roth soon discovered he had a natural aptitude for it. The opportunity to “make something” appealed, given that he had spent much of his career as a C Sharp programmer. C Sharp is considered a bit outdated today; the most popular and employer-friendly languages are Java and Python. “My skills didn’t port to the cloud,” said Roth.

Fortunately, TechShop was catering to a different kind of entrepreneurship, and fueling a kind of “Renaissance” for hardware startups. So it didn’t take long before TechShop’s most dedicated member began to receive requests for help.

A number of other makers desperately needed an extra pair of hands to get their prototypes developed and products shipped on time. Many of them were freshly-minted after successfully raising funds for their projects on sites like Kickstarter. A dab hand with a laser cutter, Roth could charge upwards of $20 an hour.

Within a few months, Roth was able to move into a house for startup founders. Chris Fornof, a TechShop member and community builder at 3D gesture controller company LeapMotion, paid his rent for several months “purely out of the goodness of his heart,” Roth said.

He sent a good portion of his earnings to his family in Vegas and started making plans to relocate them to the Bay Area. 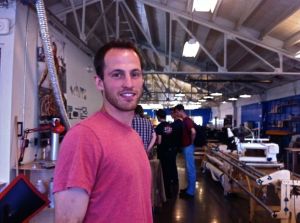 “Marc had this tenacity, commitment to learning and re-skilling,” said David Lang, a member of TechShop who started taking classes around the same time.

Similarly to Roth, Lang’s living situation was unstable. For the past year or so, he had resided on a sailboat in Berkeley, Calif. After discovering TechShop, he saw an opportunity to reinvent himself as a maker.

Lang learned how to build robots and work with machines in less than six months. His first project, a mini submarine for amateur ocean exploration called OpenROV, raised $111,000 on Kickstarter. Lang would later hire Roth on a contractual basis.

By this time, makers were starting to get mainstream media attention. Lang recently launched a second Kickstarter campaign to fund a book on his experiences.

Fast forward a few years to spring 2013. Roth is now an entrepreneur with a funded laser company. He threw himself into design with such gusto that he’s an Autodesk instructor, consults for LeapMotion, and teaches seven classes at TechShop.

Most importantly to him, Roth still regularly interfaces with the local homeless. He’s a living testament that the right program can make all the difference.

His dream is to build his own version of TechShop called “the Learning Shelter” that specifically caters to the homeless. He envisions a venue with shower facilities (a desperate need in the city), accommodation at a nearby church, computers, equipment, 3D printers, and an openness to any and all ideas. He claims to be already in the early stages of discussions with Autodesk about potentially donating computers. 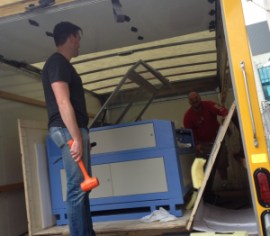 But the maker movement is no quick-fix solution, in part because existing homeless programs aren’t ready to embrace it. “With few exceptions, I’ve heard nothing but resistance from shelters,” said Roth.

One of the exceptions is Project Homeless Connect, a nonprofit that caters to the roughly 6,500 homeless people in San Francisco, according to a recent count (I use the word “count” in the literal sense; the actual number is thought to be far higher.)

Director Kara Zordel said the main goal is to help the homeless develop the skills they need to take job openings at tech companies. “If they were just given a little training, they could apply,” she said.

Can the tech industry be a true “meritocracy?”

Zordel believes the tech community has a responsibility to its most underserved population. After all, technology is supposed to level the playing field; we often hear the term “meritocracy” bandied about.

However, homeless people have scant access to computers. To make matters worse, it’s exhausting to simply secure housing. If a homeless person isn’t lucky enough to win the lottery for a 90-day bed, they are forced to queue up for a one-day bed. Those with the best shot have stood in line since 2 a.m. or 3 a.m. the previous night. Good luck competing in a meritocracy if you haven’t had a good night’s sleep in a safe place.

Glover, who met Roth through a mutual friend, has not been lucky enough to secure a bed for the night. At this juncture in our conversation, he hands me a resume and shows a video reel for his acting work. He doesn’t ask for anything but a job. “It feels like we’re stuck in this cycle,” he said.

And there’s another challenge — the lack of self-belief after being told “no” for so many years. Roth tells a revealing story about a friend from a shelter who needed to be coaxed just to admit his life’s goal to open a chicken restaurant. “People aren’t comfortable seeing themselves as creative,” he said. “They just don’t see their own potential.”

With the Learning Shelter, Roth’s goal is to shine a light on the true face of homelessness and a community that is plagued with misconceptions. “I worked hard all my life, but the world changed,” said Roth. But he adapted — it just took $49 for a month’s membership, a 3D printer, and an open door policy.

As Roth wrote on his profile in TechShop’s meetup group, “I haven’t had a bad experience with anyone I’ve met here. I’m so at home here.”