Update: A previous version of this article suggested that Icertis had raised $75 million. The amount is actually $115 million.

There’s more to managing contracts than most folks realize. Deals between companies of a certain size must be executed to the letter after they’re drawn up and finalized, and then continuously analyzed to reduce financial risk and improve performance. That’s why manual contract management is estimated to cost businesses in segments like health care tens of billions of dollars annually, and why the global contract management market is anticipated to be worth $3.16 billion by 2023, according to Reports Web.

Increased demand for automated solutions has buoyed firms like Seattle, Washington-based Icertis, which provides a cloud-hosted management suite designed to afford clients greater control over contract costs and revenue. In anticipation of significant growth, it today revealed that it closed a $115 million series E round co-led by Greycroft and Premji Invest, with participation from existing institutional investors including B Capital Group, Cross Creek Advisors, Ignition Partners, Meritech Capital Partners, and PSP Growth. The fresh capital brings its total raised to $211 billion at a $1 billion valuation, which Icertis claims is the highest valuation of any contract lifecycle management company to date.

CEO and cofounder Samir Bodas says the funds will be used to build out Icertis’ business apps and to extend its blockchain framework, which integrates with enterprise contract management platforms to orchestrate tasks like certification compliance, supply chain transparency, and outcome-based pricing. He says it’ll also bolster the ongoing integration of AI and machine learning services into Icertis’ platform, and help to scale sales and marketing efforts globally as the firm expands its partner ecosystem and pursues acquisitions. (Just in the past 18 months, Icertis opened offices in London, Paris, Singapore, Sydney, and Bulgaria, bringing its worldwide location count to 12.) 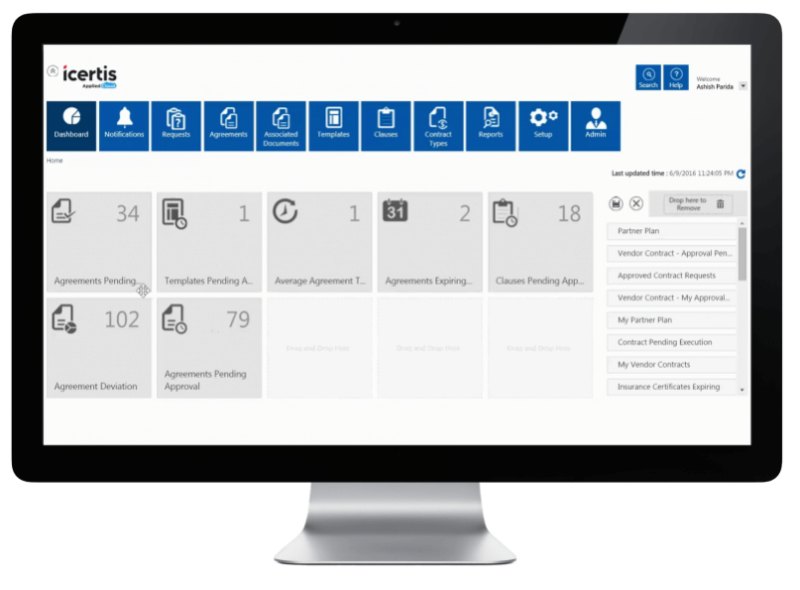 “Companies must re-imagine every business process to compete in today’s hyper-competitive global markets,” said Bodas. “Nothing is more foundational than contract management as every dollar in and every dollar out of a company is governed by a contract. As the … market takes off, we are thrilled to have Premji Invest join the Icertis family, Greycroft double down by leading a second investment round and all investors re-up their commitment as we execute on our mission to become the contract management platform of the world.”

Icertis’ platform, which is architected on Microsoft Azure, can read and analyze files to provide managers with risk management reports, automatic obligation tracking, and smart notifications. It systemizes contracts and associated documentation organization-wide, and it extracts contact data and metadata to suss out contractual commitments and proactively monitor obligations and entitlements to ensure compliance.

Icertis’ platform plays nicely with third-party major procurement and service management solutions from Salesforce, Microsoft, Coupa, and others, and it lets users interact through virtually any medium, including text, chat, voice, and email. As for the aforementioned blockchain framework, it facilitates the deployment of standards-based blockchains on Azure (within the Icertis platform) by defining smart clauses for contract types that trigger actions based on state changes. Users can test experimental configurations and scenarios on the fly, or create customer-facing interfaces for visibility and access.

Icertis certainly isn’t the only contract management solutions provider around — rivals include Concord, which raised $25 million for its digital contract visualization and collaboration tools last October. But Icertis has substantial momentum behind it, with a 125% compound annual growth rate over the past four years and 5.7 million contracts under management for customers in over 90 countries. Current customers include five of the top seven pharmaceutical companies in the world and big-name brands like 3M, Adobe, Airbus, BlueCross BlueShield, Boeing, Cognizant, Daimler, Johnson & Johnson, Merck, Microsoft, Humana, Neiman Marcus, and Wipro.

“When Greycroft invests in a company, we commit to long-term assistance and, since leading their Series A round in 2015, we’ve been proud to support Icertis as it works to transform the foundation of commerce,” said Greycroft partner Mark Terbeek. “Over that time, we’ve seen the company become the undisputed CLM leader, acquiring a huge stable of blue-chip customers and generating a return on capital that is among the best we’ve ever seen. We have no doubt they will become the next giant in the enterprise SaaS market.”