Infarm, a Germany-based startup that distributes “modular farms” to grocery stores and other urban locations, has raised $100 million in a series B round of equity and debt funding led by Atomico, with participation from existing investors including Balderton Capital, Cherry Ventures, Astanor Ventures, and TriplePoint Capital.

Founded out of Berlin in 2013 by Osnat Michaeli alongside brothers Erez and Guy Galonska, Infarm has partnered with a number of food retailers across Europe, including Amazon Fresh, Metro, Edeka, Migros, Casino, Auchan, and Intermarche to install vertical indoor farms inside their outlets. 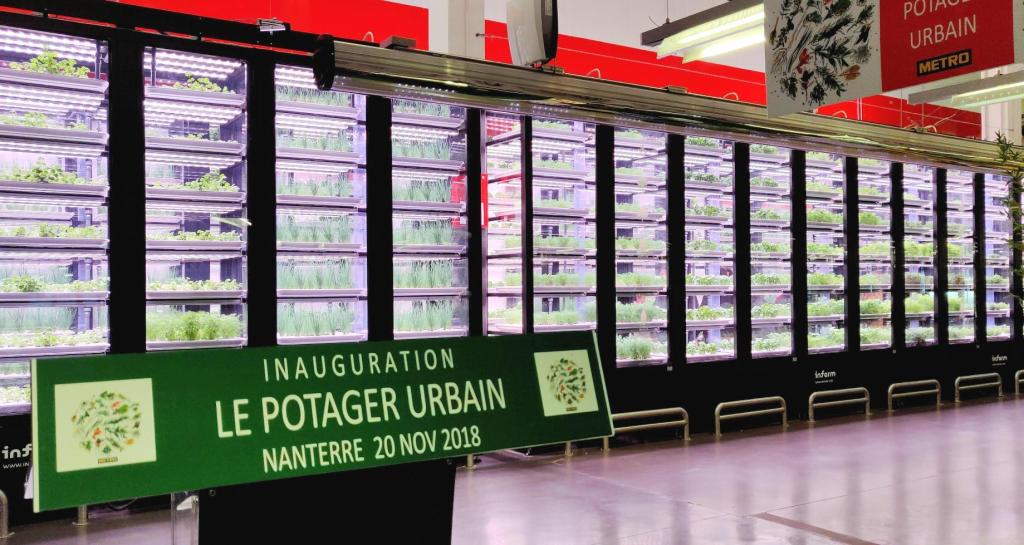 Above: Infarm @ Metro in France

Infarm said that its technology is designed to be built and distributed in any available space, and there is no need for a centralized warehouse or other infrastructure setup costs. The farms can be found in restaurant kitchens, supermarket aisles, and warehouses, and are designed to scale and make cities self-sufficient in producing their own plant-based food.

Each farm is “connected,” with sensors collecting and recording growth data, while they can be controlled remotely by the Infarm platform that “learns, adjusts and improves itself continuously,” according to the company. 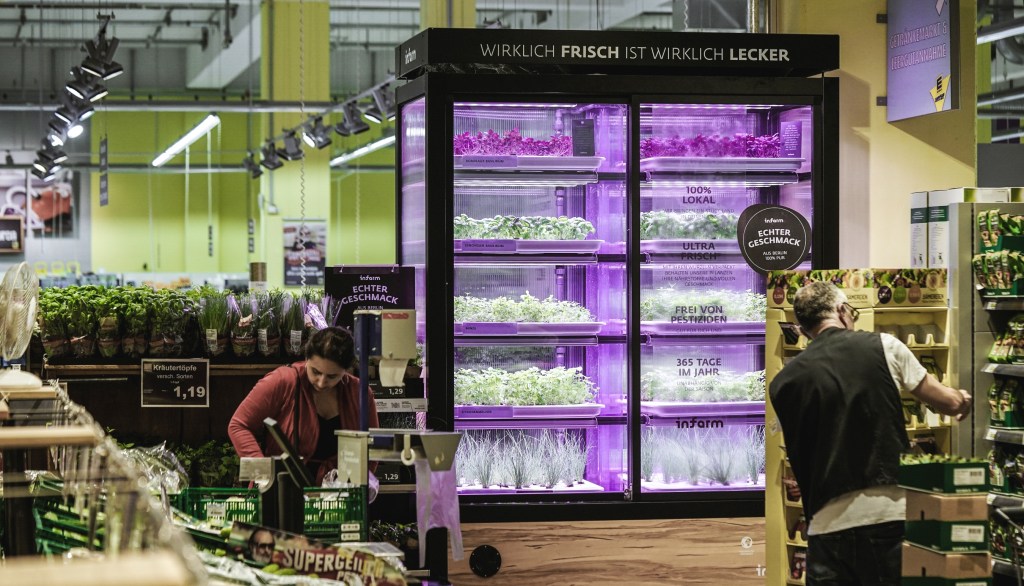 Prior to now, Infarm had raised nearly $34 million, and with another $100 million in the bank, it’s now gearing up to add additional markets to its roster, including the U.K., where it’s launching in September. The company said that it’s also in “advanced discussions” with retailers in the U.S. and Japan, while it plans to invest in various R&D, commercial, and operational initiatives.

“Infarm was founded with an ambitious vision to feed the cities of tomorrow by bringing farms closer to the consumer, and with this round of funding we aim to grow our presence further — sowing the seeds for a delicious and sustainable food system in urban centers across North America, Asia, and Europe,” noted Erez Galonska, Infarm cofounder and CEO.

Infarm isn’t alone in its quest to introduce indoor farming to market. U.K. supermarket giant Ocado yesterday announced it was investing $22 million and joining a vertical farming joint venture, while back in December Alphabet’s VC arm GV led a $90 million investment in New York-based Bowery, taking its total funding to nearly $120 million. And San Francisco-based Plenty has raised north of $200 million for a similar proposition.

For Atomico, Infarm represents the latest in a line of “sustainable”-focused investments. Just yesterday, the London-based VC firm announced it had led a $25 million investment in Norway’s Spacemaker, which is working toward optimizing urban development projects with AI-powered simulation software, to cater to the expected population surge over the next few decades.

“The consumption of fresh produce is a huge environmental burden on our planet, one that will only increase as urban populations increase,” added Atomico partner Hiro Tamura, who now joins Infarm’s board of directors. “This is not sustainable long-term. Infarm has perfected the holy trinity when it comes to solving this massive global problem; their unique technology makes fresh food production sustainable, their solution has a global audience which means they have operated internationally from day one; and this has resulted in the company being a commercially attractive proposition for all stakeholders in the supply chain.”

Infarm also fits into a broader sustainability investment trend that has seen startups across urban mobility and waste reduction rake in investor cash. And in the food realm, meat substitute company Beyond Meat raised $122 million in funding ahead of its IPO last month — the company’s shares are currently red hot.