Nokia’s “factory of the future” in Oulu, Finland offers a glimpse into a world in which high-speed connectivity promises to transform manufacturing. But the potential to automate just about every aspect of these operations also raises questions of what roles will be left for people to play.

During a recent visit, I got a chance to step inside Nokia’s factory, where the company is manufacturing its 5G base stations. The Oulu campus is the heart of Nokia’s 5G radio design and innovation efforts, and having that manufacturing facility onsite allows the company to test and build equipment in tandem with researchers.

As 5G networks begin to roll out, one of the most heavily hyped use cases is Industry 4.0, or the “factory of the future.” 5G proponents argue that these blazing-fast networks, which can support massive numbers of connected objects in small areas and with no latency, will allow manufacturers to use automation and data to make their facilities far more efficient.

To prove this point, Nokia will be embracing many 5G principles in its Oulu factory. “We have our own factory here,” said Jani Leskinen, head of Nokia’s research and development in Oulu. “Why not use this as a playground?”

One of the more revealing elements in all of this is that the connectivity is actually running on a 4G LTE network, at least for now. Nokia executives point out that 4G networks are currently underutilized and are still rolling out in many areas. Carriers want more time to recoup their investments on 4G even as they continue to make 5G plans, so a company like Nokia faces the delicate balancing act of encouraging greater connectivity now without undercutting 4G.

Nokia’s message is that companies don’t need to wait for 5G to start connecting their factories. As it is prepared to demonstrate with its own factory, an evolutionary path will lead to 5G conversion in the next couple of years. And using just 4G, executives estimate that they have automated some product lines in the Oulu factory to about 99%, with some prototyping processes remaining more manual.

It’s an approach Nokia is calling the “conscious factory.”

“With data analytics and the high level of automation, this manufacturing environment is full of innovation,” said Heikki Romppainen, head of Nokia’s Oulu factory. “As the number of robots is increasing all the time, so is the level of automation. That will make the whole supply chain more flexible and easier to adapt to new products.”

The first thing our group saw upon entering the factory was a series of large-screen TVs. These screens display real-time information from the various sensors that monitor almost every process across the factory floor. Meetings to discuss issues or evaluate new elements are often held in front of the screens, Romppainen said. The data from these sensors runs through Microsoft’s Azure platform, and the system allows managers to track parts by serial number as they move through the factory. Traditionally, quality testing would happen at the end of the assembly or manufacturing process. But Romppainen said this system allows the company to pinpoint exactly where something went wrong and fix the problem more quickly.

“You don’t have to investigate and retrace the steps and run a diagnostic to find the defect,” Romppainen said. “In real time, you can see where the failure is because you have visibility through the data.” 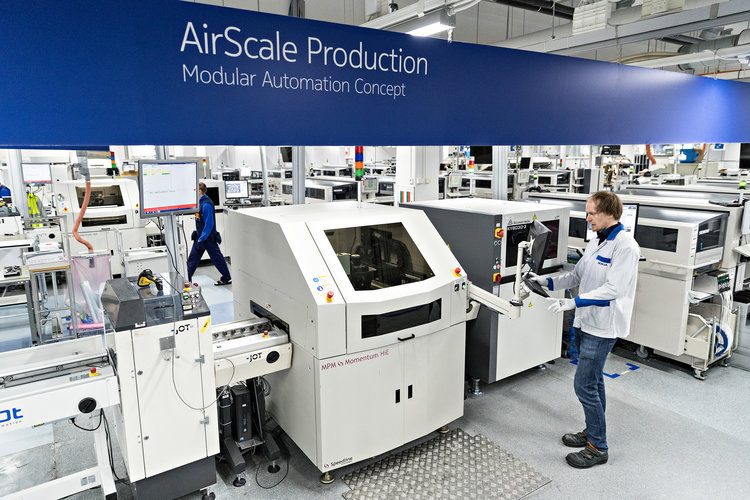 Those 4G networks also allow telepresence robots to roam the factory floor, enabling colleagues in other factories to conference in and observe the manufacturing operation when they are trying to troubleshoot.

Across the factory are sensors measuring temperature and humidity and antennas connected via Bluetooth that enable an indoor geo-tracking system that is accurate to within 30 centimeters.

With this data stream, the system now automatically tracks the flow of supplies and detects when they are running low. In the past, the line would stop when supplies for a part ran out. Now the system sends an alert and a robot fetches additional parts or supplies, which dramatically lowers downtime.

Beyond that, the automation has enabled new levels of sophistication. The number of components on a motherboard for one of the base stations has grown dramatically. And an optical system inspects the soldering work, something that would be nearly impossible to do with the human eye.

Robots, like those pictured at the top of this story, are also doing final assembly of some products. By standardizing such things as screw sizes, Nokia has been able to turn more and more of the work over to robots. In this case, the company is still using more industrial robots, which work separate from humans in enclosed cells. 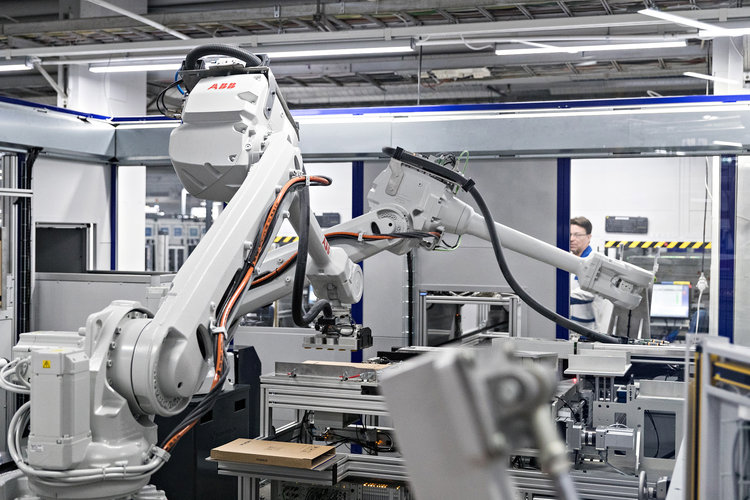 Nokia is also starting to introduce “cobots,” which have a high degree of sensitivity and are safe to use alongside humans. An advantage of cobots is that they can be more easily reprogrammed to handle repetitive tasks.

As we were being led through the factory, robots carrying buckets of supplies zipped up and down the aisles. The robots were not running on any tracks, but were fully autonomous and independent. Whenever one would approach our group, it would slow, weave through us, and then continue on its way. 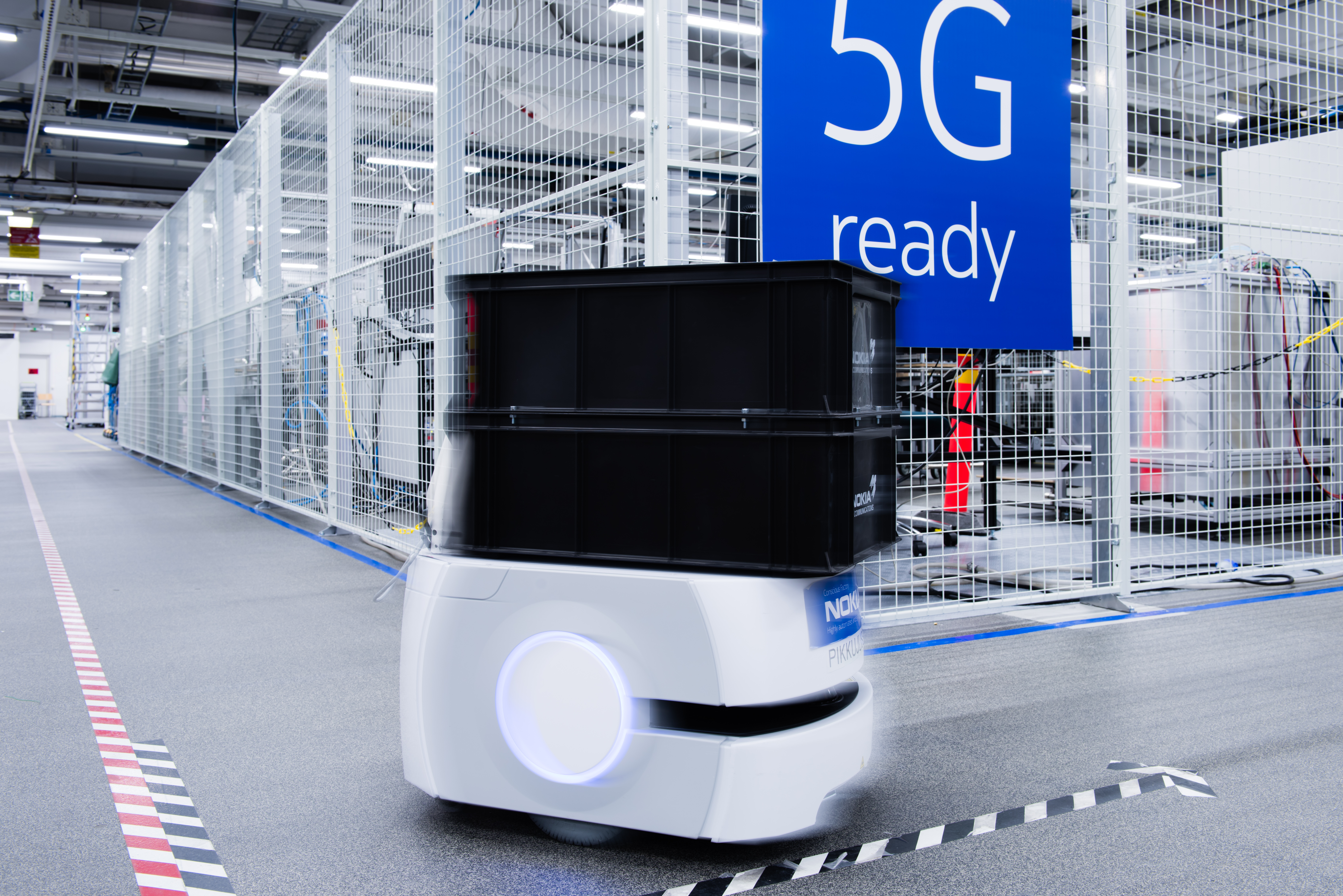 All of this raises the question of just how much further automation could go with 5G networks. For one thing, the company will be able to introduce more sensors that offer even greater complexity. Today, the sensors alert managers when there is a problem. But more powerful sensors could potentially diagnose an issue and perhaps either repair the problem or call on an autonomous robot to fix it.

Greater video-monitoring of human processes is another use case being tested. At one station, the company has set up a 5G test system that places a camera over an employee as they work. 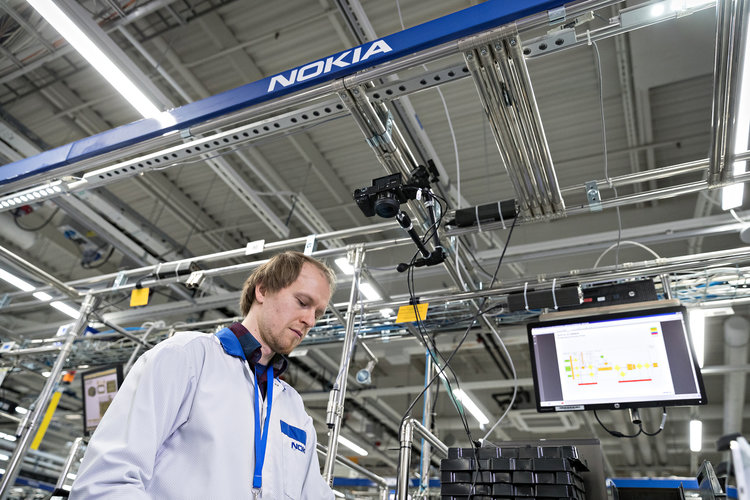 The system tracks the employee’s activities, and the video analysis — running over a 5G network — alerts them when they’ve made a mistake. 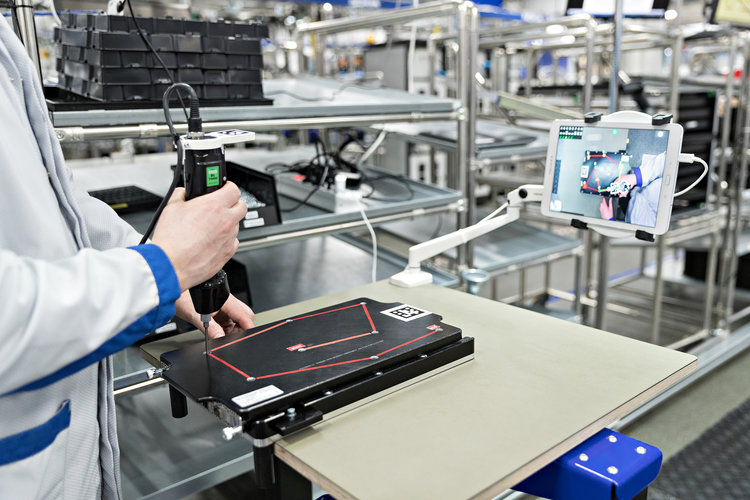 Of course, whether workers will appreciate such video assistance is another matter, which brings us back to the question of how this will impact people. Staring out across the factory floor, we saw only about 100 people, and it wasn’t obvious what most of them were doing.

Romppainen said most of them are still performing some kind of replacement, assembly, or diagnostic tasks. Jobs include process control and follow-up, reacting to process issues noted by automated testers and analytics systems, and overall improvement of the manufacturing process.

Yet if the goal is more and more automation, what will happen to even these jobs?

The debate around automation and job loss is only going to intensify in the coming years. On the one hand, automation could be critical in scaling production of 5G base stations and other endeavors. Because 5G signals cover shorter distances than 4G, carriers are going to need to install a much higher density of base stations to achieve reliable coverage. The manufacturing demand could be enormous, and it’s not clear there is enough factory capacity or enough workers to meet those needs over the next decade without massively automating the process.

On the other hand, it seems a clear that there is going to be less and less opportunity for unskilled workers. And connecting factories is just the beginning.

The smart factory will in theory be connected to an increasingly automated supply chain. Imagine robots in warehouses filling supply orders and placing them on autonomous trucks and drones for delivery. 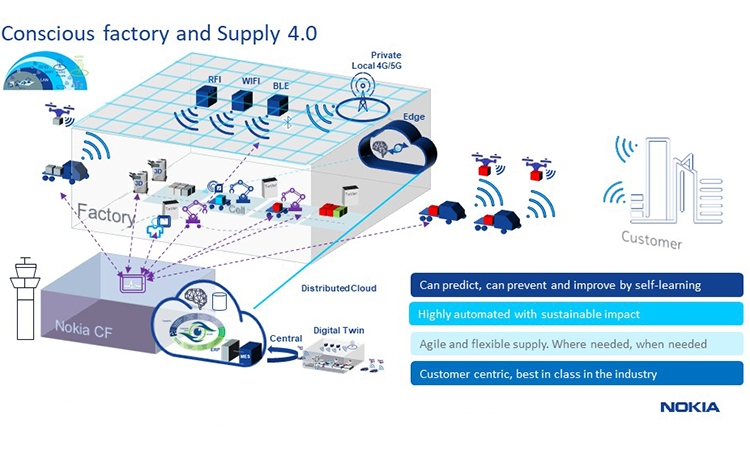 To the extent that people are included in these scenarios, they will be data analysts and robotics experts to ensure the machines are working properly.

Romppainen had a few things to note. He said the company already has a tough time recruiting for the type of jobs threatened by automation. Making the factory more appealing to prospective recruits means shifting the kind of work to make employees a “more creative part of the process.”

The company has launched a program called “Conscious Employee” to define what jobs could and should be part of this new manufacturing world. That includes pinpointing necessary skills in areas such as data science, data analytics, and robotics, as well as experience with augmented and virtual reality tools.

“How can we attract young people to the industrial environment?” he asked. “We need to let them know the factory today is not a place where you’re just standing in line doing one task over and over.”