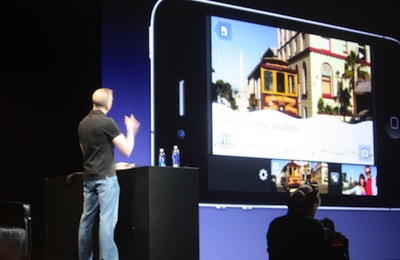 With each new iPhone, Apple has been adding more and more powerful media-recording capabilities — first with improved cameras, then with video recording, and now with the ability to record and edit high-definition video.

The camera in the new iPhone 4 will record 720-pixel video at 30 frames per second, Apple said today at its Worldwide Developers Conference in San Francisco. The camera flash can stay on while someone is recording a video. Then you can edit your movie right on the iPhone with iMovie, adding things like theme transitions and titles. The camera also knows where you are, so, for example, it can automatically add San Francisco-themed music to videos shot in the city.

Users will also be able to share this video with friends with a single click. It’s worth noting that this capability is being announced right after AT&T announced tiered data plans, so users may want to be more conservative with how much media they’re sharing.