This post is part of a series brought to you by Columbia Pictures Moneyball. As always, VentureBeat is adamant about maintaining editorial objectivity. 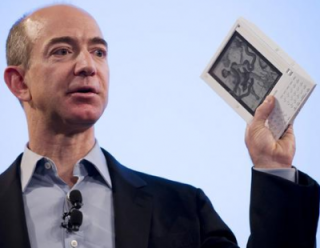 After Amazon’s success with the Kindle and its complete dominance of e-retailing, it’s difficult to imagine that it was once a company that struggled to make a profit. It’s even harder to fathom that was exactly what Amazon’s founder and CEO Jeff Bezos planned.

The company, which launched in 1995, went over six years without reaching profitability. Come the fourth quarter of 2001, it finally earned a measly $5 million on more than $1 billion in revenue. Shareholders called foul initially, but their worries were eventually proven wrong as Amazon’s slow growth added up to tremendous success. The company has since become synonymous with online shopping and has grown into a technology giant with a market cap of $96 billion.

For Bezos, playing it slow and steady helped Amazon survive the late 90’s dot-com crash. That long-term mentality has helped Amazon launch major successes like the Kindle e-reader and its AWS cloud service, and has prepared the company to take on Apple’s iPad in the tablet arena and beyond.

We can catch a glimpse into the way Bezos’ mind works with his recent $42 million investment in a giant clock that will run for 10,000 years. “Over the lifetime of this clock, the United States won’t exist,” Bezos told VentureBeat’s Dylan Tweney, who was then working for Wired. “Whole civilizations will rise and fall. New systems of government will be invented. You can’t imagine the world — no one can — that we’re trying to get this clock to pass through.”

During Amazon’s July earnings call with investors, Bezos’ offered up some valuable insight into how Amazon’s long-term planning works, in response to a question about why we’re not seeing many failures from the company. “Go back in time when we started working on Kindle almost seven years ago….  There you just have to place a bet,” he said. “If you place enough of those bets, and if you place them early enough, none of them are ever betting the company. By the time you are betting the company, it means you haven’t invented for too long.”

If you invent frequently and are willing to fail, then you never get to that point where you really need to bet the whole company. AWS also started about six or seven years ago. We are planting more seeds right now, and it is too early to talk about them, but we are going to continue to plant seeds. And I can guarantee you that everything we do will not work. And, I am never concerned about that…. We are stubborn on vision. We are flexible on details…. We don’t give up on things easily. Our third-party seller business is an example of that. It took us three tries to get the third-party seller business to work. We didn’t give up.

Indeed, many questioned the wisdom of releasing the Kindle back in 2007, which at the time cost $399 and was Amazon’s first major consumer electronics product. The Kindle wasn’t the first e-reader on the market — Sony launched its first reader in the US in 2006 — but it was the first to be connected directly to an e-book store and, perhaps most importantly, it featured unlimited access to Amazon’s 3G “Whispernet” network.

The Kindle made it possible to download and start reading a new book while relaxing on the beach, and consumers lapped it up. The first-generation model sold out within five hours, and it remained out of stock for five months as Amazon caught up with backorders. Since then, Amazon has made the Kindle cheaper by offering Wi-Fi only models and ad-supported models. Now it’s possible to get a Wi-Fi third-generation Kindle that’s ad supported for only $114. You can bet the e-reader will hit the magic $99 price point come this holiday season.

Just like Amazon helped to popularize online shopping, the Kindle has become most consumers’ introduction to e-books. Amazon has never publicly discussed Kindle sales, but it was estimated that it sold around 8 million units last year.

Looking forward, Amazon has an Android tablet on the horizon which is expected to cost $250. The tablet will serve as a conduit to all of the company’s services, which could give Amazon a further leg up in music and movie rentals and purchases. It will likely also end up serving as a sort of interactive catalog for the site, and it may even come with an Amazon Prime subscription for free two-day shipping.