MOUNTAIN VIEW, Calif. — Yes, it’s true that some data scientists have left LinkedIn following a recent reorganization of these highly prized workers inside the company. But a few people holding these roles believe the moves have sped up decision-making, benefited the hiring process, and brought together people who perform similar functions.

Just listen to Lutz Finger, director of data science and data engineering at the company. Finger arrived at LinkedIn in October 2013, joining the business-analytics team inside the office of LinkedIn’s chief financial officer. After the reorganization about five months ago, Finger found himself armed with more resources.

“Suddenly you realize another part of the organization has a similar need, but that need is targeted on the product side,” Finger told VentureBeat in an interview. “What we did is actually we put both together. What has changed is I’ve tripled the number of algorithms I actually can test on my data, because I integrate the algorithms from the other team, which is pretty significant.”

LinkedIn and a few other technology companies lead the pack in terms of how many data scientists they employ. As these data-smart companies grow bigger and older, they are adjusting the ways in which they put their data scientists to work. Yes, the field is maturing, and indeed different kinds of data scientists have been emerging. But for the most part, the changes at LinkedIn and other companies come in response to the dynamics at play inside of the companies.

And at LinkedIn, it sounds like specialization was something several people needed. 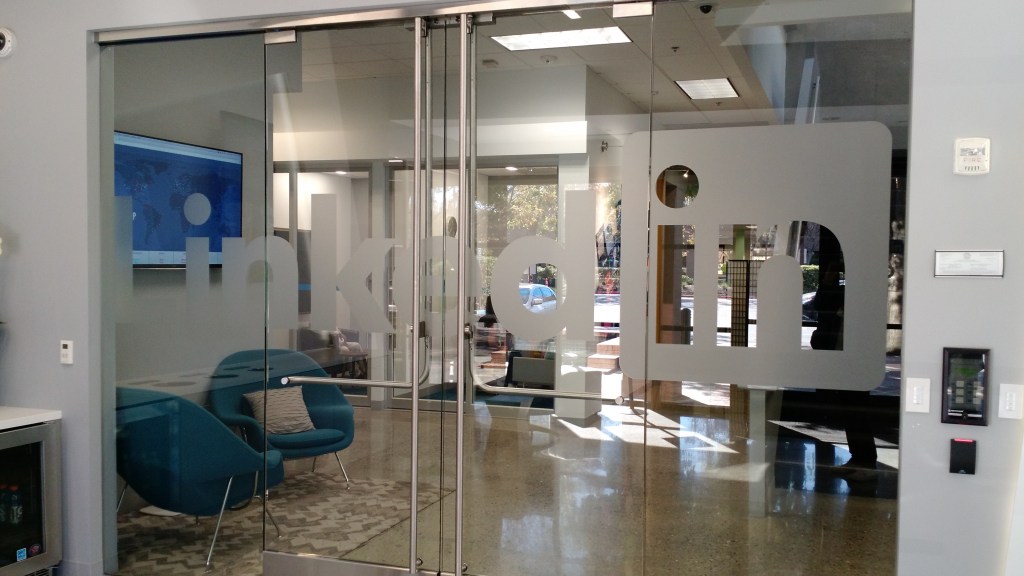 Above: Inside the lobby of a building on LinkedIn’s Mountain View, Calif., campus.

And no, the shakeup hasn’t brought product innovation to a halt. Employees still get one “InDay” per month to do things they don’t ordinarily do. Look, for instance, at a project Lutz did a few months ago, right after the reorg happened. Finger, who generally does work for internal consumption, used LinkedIn’s vast supply of information on users to predict the career trajectory of a reporter at Mashable.

“It was just an idea,” Finger said. His colleagues thought it was awesome, he said, and supported it.

But the reorg has also positively affected everyday aspects of work, like working with managers. “You’re going through one or two managers, one or two meetings,” said senior data scientist Jason Schissel.

He’s found himself more closely united with colleagues. “Your objectives and key results align better with the people you’re collaborating with,” Schissel said. “The same work is getting done. It’s just less work explaining it and making sure the right parties are at the table.”

Add up those small things quarter over quarter, and the reorg should improve productivity measurably for the company, Schissel said. 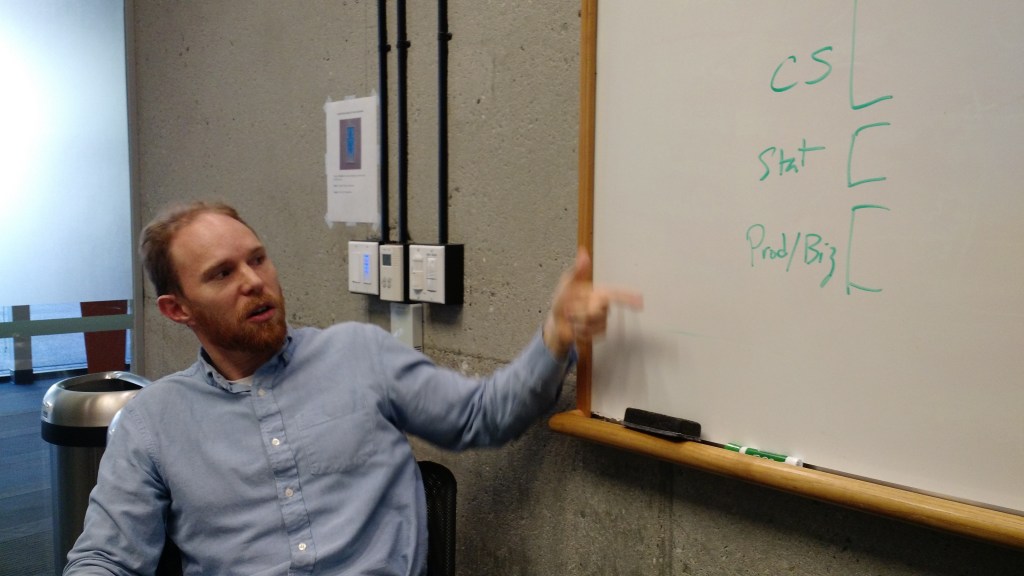 Image Credit: Jordan Novet/VentureBeat
When it comes to bringing in new talent, too, the reorg is paying off. For Mathieu Bastian, a senior data scientist now in the engineering organization who has been at the company since 2010, it’s easier to find new data scientists.

“Before, I had to do a lot of work on helping all recruiters to find that talent,” he said. Under the new system, he can also more easily hire different types of employees, like application engineers, he said.

Bastian is a Swiss Army knife among data scientists. He’s worked on products like endorsements, suggested skills, and the InMaps feature for users to visualize their connections. He’s built a recommendation engine, and he’s also a cofounder of an open-source project, the Gephi graph visualization tool.

Now he’s focusing. As he writes on his own LinkedIn profile, “I lead a team of talented Data Scientists focusing on building the next data-driven products at LinkedIn.”

“I think what you see is, as we started small, we needed people like Mathieu, who could do pretty much everything,” Finger said. “Now, once we grow, we are now trying to specialize to get certain things right.”

But just as LinkedIn has taken the time to rearrange its data scientists, other large or fast-growing technology companies have done so as well in reaction to company goals. Executives at Airbnb, Facebook, and Uber have also made adjustments to their data science talent, Jonathan Dinu, a co-founder of data science training startup Zipfian Academy, told VentureBeat.

Uber, for example, “had reached a scale where not just 10 smart people were all hacking on things and seeing how far they can get,” Dinu said. Now, he said, the alternative cab startup’s data scientists have specialties. (Uber did not respond to VentureBeat’s request to comment for this story.)

A key question, though, is whether to centralize data scientists or not, and LinkedIn has moved away from that model, opting to integrate instead. 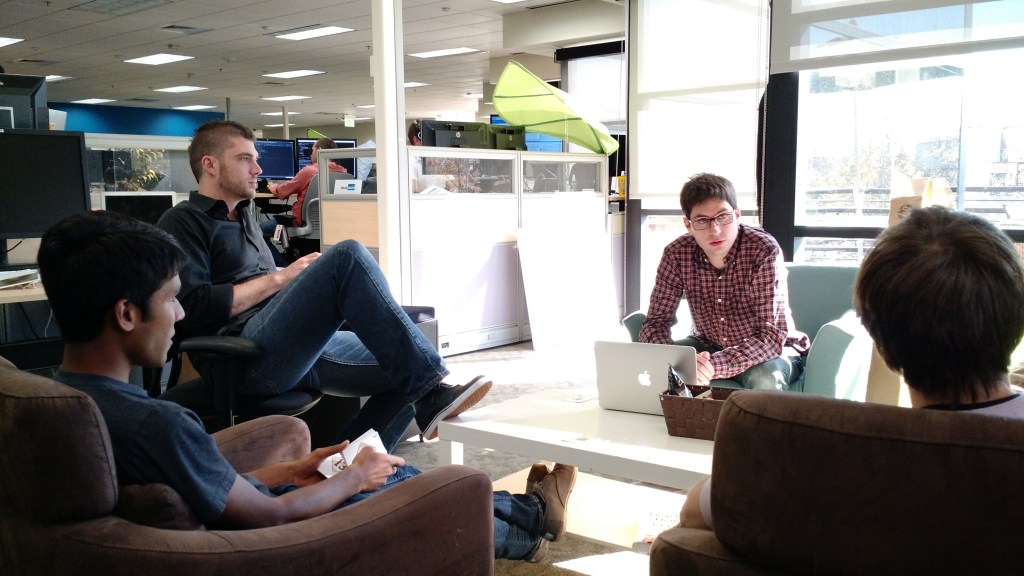 “At what point does this happen?” Dinu said. “Where is the threshold where [companies go] from a single data science team, where everybody does everything, to a more mature team, and people focus more, and go into some more complex organizational structures, like the hub-and-spoke model, where people are embedded but come back and having this centralized organization?”

The answer, he said, depends on the company.

When Riley Newman joined Airbnb in 2010, there were no data scientists. “I was the data team,” he told VentureBeat in an interview. But soon after that, the home-sharing startup “hired a couple more people eventually, and we kind of divided the company into pieces — you take this half, you take this half.” Then more people came on: “You take that quarter, and you take this quarter,” Newman said.

Then, at the beginning of this year, things evolved further. The data science function was split in half, Newman said, and employees focused on either facts or insights.

“Everyone needs access to facts, but those are not very complicated to get at and can be largely be automated,” he said. “Insights take the work of data scientists building models and stuff like that.”

Airbnb has built up a team to focus on data engineering, a.k.a. the dirty work of cleaning up data and getting it ready for analysis. Soon that team will take on the facts part, giving many employees a simple tool to retrieve data quickly, while the data scientists will handle the insights.

But at the end of the day, all these data people work together. And that’s something that Newman, now Airbnb’s head of data science, believes in — so long as it’s not an ivory tower.

“I don’t know if I agree with the data science team being stripped apart and fully embedded within separate parts of the business,” he said. “I do think there’s still a role for data science as a standalone function in a business. But, you know, you have to think about how the rest of the business interacts with that function. There’s this constant kind of pressure from around the company to absorb data scientists and fully embed them within their teams. You need a very, very strong data science team to kind of balance those needs against the benefits you get from a centralized team.” 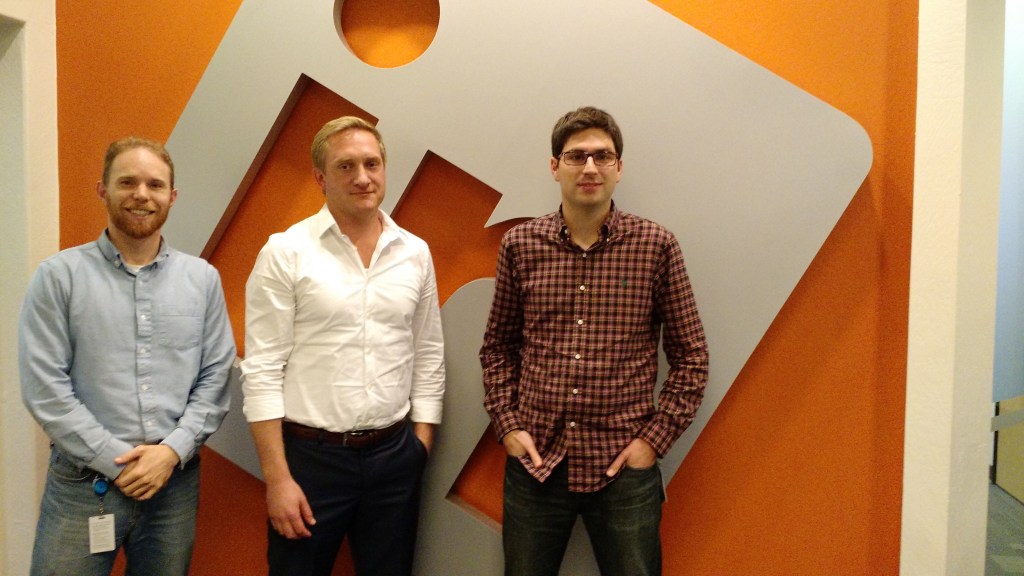 But if you ask LinkedIn employees what they think of the company’s new system, they’ll mention its advantages.

“We’re working on more complex data products than ever before,” staff software engineer Jacob Bollinger told VentureBeat. “This efficiency is a focus that allows for daily collaboration with other teams.”