Log management platform developer LogDNA today announced it has closed a $25 million round of funding. Newly appointed CEO Tucker Callaway — who previously served as the company’s president and chief revenue officer and who replaces cofounder Chris Nguyen, now LogDNA’s chief strategy officer — says the proceeds will fuel “all areas” of the company.

Developers have to contend with a firehose of log data every day — sometimes on the order of petabytes. It’s enough to bring even the nimblest of DevOps teams to a crawl, particularly when something goes wrong. Nguyen and cofounder Lee Liu set out to address the information overload seven years ago with LogDNA, which grew out of an internal tool they’d built for a previous company.

LogDNA runs in the cloud or on-premises, offering a streamlined interface that lets developers narrow down log lines by filters or search using standard terms, excludes, or chained operators. Thanks to built-in auto-parsing and graph support for “most” popular formats, developers can use natural language to jump to specific points in time and create custom alerts for certain queries, hosts, and apps. 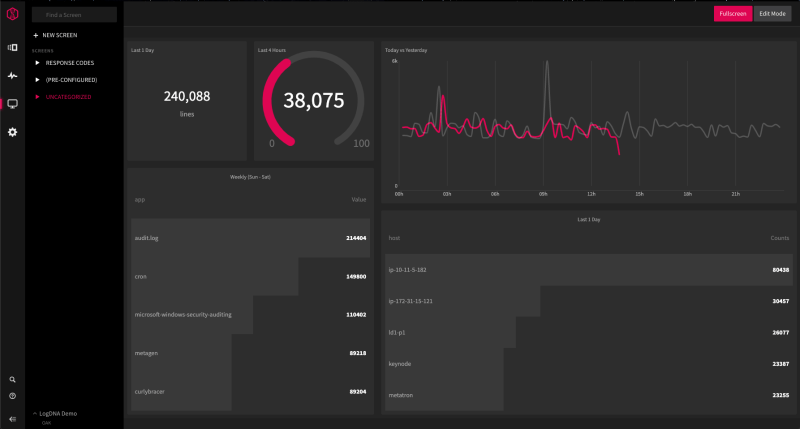 Above: The LogDNA monitoring dashboard.

There’s also a proactive component. LogDNA says it has invested heavily in AI that prevents server outages and surfaces data to mitigate such outages, enabling the platform to juggle hundreds of thousands of log events per second and over 20 terabytes per customer per day while offering SOC2, HITECH, PCI-DSS, and HIPAA-compliant logging. LogDNA processes logs across multiple deployments from more than 30 of the industry’s most popular environments, including Amazon Web Services, Heroku, and Elastic.

Mountain View-based LogDNA has plenty of competition — Loggly, Logentries, Sumo Logic, and Scalyr come to mind — but it has managed to snag big accounts like Ada, Virgin Australia, IBM Cloud, and Lime, in part thanks to an attractive pricing scheme. Customers pay per gigabyte or take advantage of LogDNA’s free plan if they’re on the smaller side.

A Y Combinator graduate, LogDNA raised $1.3 million in seed funding from Initialized Capital and Skype cofounder Jaan Tallinn in July 2016 and $6.7 million from Initialized Capital in series A funding in November 2017. The company’s suite is now used by more than 2,000 customers and tens of thousands of developers, growth that has led to a 2.6 times uptick in annual recurring revenue over the last year.