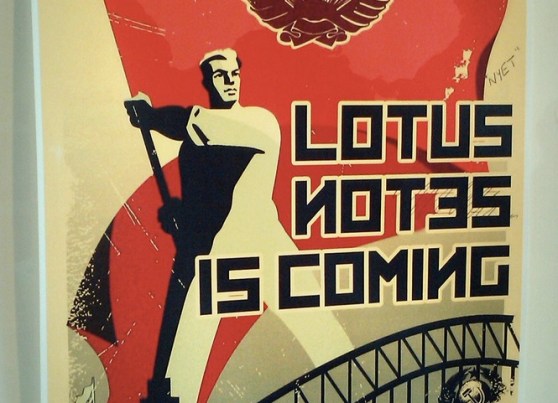 When IBM bought Lotus for $3.5 billion in 1995, it looked as though the venerable computing giant was just about to lock up the software industry and coast to unstoppable profits.

Eighteen years later, Lotus looks more like a millstone around IBM’s neck than a flywheel giving it extra speed.

According to a report in the Wall Street Journal, in advance of IBM’s Q4 earnings release today, Lotus was the weakest performer in IBM’s software portfolio, shedding 6.4 percent of its sales volume in the first nine months of 2012.

It probably accounts for about $1 billion in annual revenue, according to estimates sourced by the WSJ, or one-sixth to one-fifth of IBM’s overall software business.

Ironically, Lotus once led the way toward today’s hottest enterprise technologies, the collaborative software that helps teams communicate and work together on projects. One of the success stories of that niche is Yammer, which Microsoft acquired last year for $1.2 billion. So, why is IBM sitting at the back of the pack instead of leading from the front?

Lotus, which made the first blockbuster “killer app” in the 1980s (Lotus 1-2-3, a phenomenally successful spreadsheet program), went on to create Lotus Notes, a powerful groupware suite that came out in the early 1990s before anyone had any idea what “groupware” was.

I used it extensively at several companies I worked with. Initially, it was mysterious and powerful. Like most end-users of Lotus Notes, I used it primarily as an email program. It had its quirks, but it worked. But there was another dimension to Notes, a powerful, programmable backend that let you create databases and workspaces for collaborative work, contact management, information sharing, and communication.

Today, we’d call it a collaboration tool or a corporate social-media tool, and it would be web-based and standards-compliant, like Yammer, Jive, and Huddle. In the absence of standards, Notes’ engineers had to invent everything themselves, making it a clever but proprietary solution.

But long before those web-based startups came along, Notes was already losing its cool. The client software became huge and bloated. It was expensive to implement and difficult to customize.

As the Internet gained popularity in the late 1990s, Lotus added standards, like POP3 and IMAP email interfaces. They didn’t do so well with the standards department, however, driving anyone who had to use an Internet mail client with a Lotus Notes mail server absolutely insane.

The upshot is that, just as the Internet became widely used, Lotus Notes became annoying and out of date.

Sure, it was still powerful, but unlocking the power of Notes often required specialist knowledge, giving rise to a sector of Notes consultants. No surprise that these consultants are having a hard time getting taken seriously today. The WSJ quotes a Notes consultant who complains about his reception:

“I go to a party, and I almost immediately get insulted,” says Eugen Tarnow, a director of the consultancy Avalon Business Systems, which sells the aging email software to businesses. “They say, ‘Lotus Notes, that’s still around?’ It’s no fun.”

Unfortunately, IBM’s engineers realized the importance of standards compliance too late and didn’t bake interoperability into Lotus Notes well enough or early enough. So, as powerful as Notes could be, it was and is ill-prepared to work in today’s API-rich cloud environment.

IBM has more modern social-media software, too, but only makes about $55 million per year from that segment of its business. So the challenge for IBM is to continue milking as much revenue as it can from Lotus, while gradually shifting the branding and the revenue to newer, sexier lines of business. One example: Renaming its annual Lotus conference, Lotusphere, as “Connect2013.” Yeah, that’ll help.

We’ll be watching to see if the earnings report sheds any more light on IBM’s efforts to turn Notes around. But as for me, I’m not holding my breath.