Luminar, the San Francisco lidar sensor startup that to date has raised over $250 million, is getting into the subscription business. At the 2020 Consumer Electronics Show, it took the wraps off Hydra, a lidar sensor available to automaker partners for a recurring fee — a first for the industry.

Hydra — which is designed for highway scenarios with road tracking out to 80 meters, lanes to 150 meters, and objects to 250 meters — only requires 30 watts to power Luminar’s new perception computer, a reference design powered by Nvidia’s Xavier hardware. (Luminar notes that’s less energy than the average television consumes.) Impressively, Hydra boasts a range of up to 500 meters, and it features velocity point cloud attributes at both the point and object level.

Furthermore, Hydra is capable of lidar super-resolution, which here refers to advanced interlacing and adaptive scanning capabilities that increase effective resolution at frame rates as high as 20Hz to 30Hz. It’s also able to perform frame-level instance detection of objects, lane markings, and road surfaces, and each point in the point clouds it creates contains an object class attribute that enables tracking algorithms.

Hydra will begin to ship sometime in Q1 alongside a software suite, but the price has yet to be announced.

Hydra will complement Luminar’s Iris, a full stack platform and ADAS add-on that was developed by a team of engineers across Palo Alto and Orlando, led by VP of software Christoph Schroeder, the former head of R&D from Mercedes-Benz’s North America division. Iris bundles hardware and software into a single package, and it comes in two flavors: a more technologically sophisticated version that power hands-free “freeway autonomy,” and a cheaper ADAS version that drives autonomous functions like emergency braking and steering. 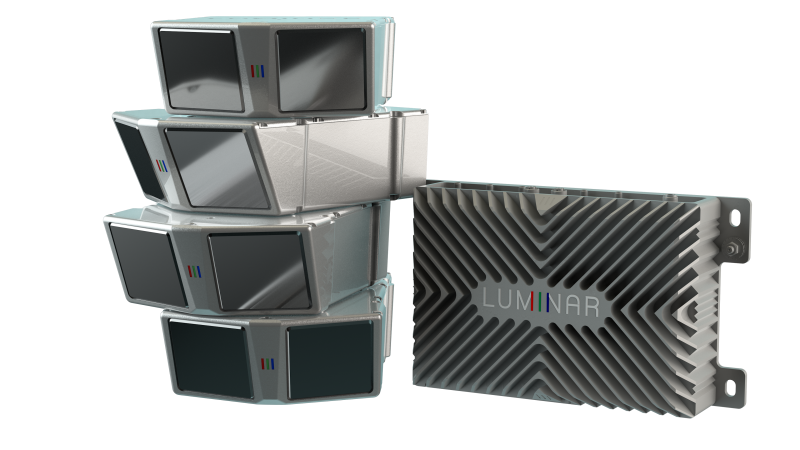 Luminar previously said it expects to achieve higher production volumes with the Iris system when it launches in 2022. The company claims it is currently quoting and arranging multi-year contracts worth more than $1.5 billion combined.

“Luminar lidar is now the established industry gold standard for performance and safety, and the perfect platform to enable the dramatic software and perception improvements required for automakers to transition from test vehicles to commercial autonomy,” said Luminar founder and CEO Austin Russell in a statement. “We’ve been quietly developing Hydra, the most advanced 3D perception system in the industry, for over three years now, and it’s time for our 40 partners and the rest of the world to see it.”

The debuts of Hydra and Iris come nearly a year after Luminar unveiled a collaboration with Autonomous Intelligent Driving (AID), Audi’s driverless technology spinoff and a supplier for Volkswagen Group brands like VW and Porsche. The two teamed up in June to outfit prototypical vehicles with object-detecting lidar sensors, and in Munich AID recently began testing fleets with forward vision systems powered by Luminar’s sensors.

Luminar in June 2018 announced Volvo as its second public partner, after the September 2017 reveal of Toyota Research Institute as its first. The Swedish car company made a “significant investment” in Luminar through the Volvo Cars Tech Fund, which targets “high potential” technology startups in the areas of artificial intelligence, autonomous driving, digital mobility services, and electrification. According to Volvo, Luminar’s innovations enabled its R&D team to pursue pose estimation — a facet of computer vision that tries to understand the position of various points in an object — with the goal of predicting pedestrians’ body language and intentions.

Above: Pose estimation in Luminar’s lidars

The competition isn’t scaring G2VP founding partner Ben Kortlang, though. He notes that Luminar is actively working with 40 automotive partners and 12 of the world’s 15 largest auto OEMs and that it now has 60 patents and a team of over 350 across Palo Alto, Orlando, and Colorado Springs.

“We’ve been following the lidar industry closely for the last five years, watching for a technology leader to emerge that can enable level 4 autonomy,” said Kortlang in a previous statement. “With the release of Iris, Luminar uniquely offers a lidar solution that meets the performance, safety, and cost metrics that OEMs require to commercialize autonomous vehicles. Luminar’s product is the enabling technology that will put autonomous vehicles on the road sooner than we expected.”