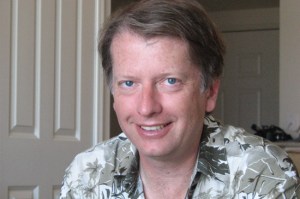 With all of the supernatural success swirling around legendary Apple CEO Steve Jobs as he steps down from the position, it’s easy to forget that he’s human. Michael Dhuey, 53, had two opportunities to experience the real Jobs through working with him.

“I had a good experience with Steve, but I also know people who did not,” laughs Dhuey during a phone interview from Cupertino, CA.

Dhuey is currently a tech lead and one of the founders of the Cisco Systems video teleconferencing department. He knows Jobs professionally after working with him on two significant projects in Apple history: The Macintosh II in 1987 (Dhuey was an electrical and computer engineer at Apple then, and co-invented the computer) and the original iPod in 2001 (Dhuey was one of two engineers who developed the hardware).

“He was very clear about what he didn’t like,” says Dhuey. “He was not filtered with his input. If he was in a meeting that was boring him, he would be blunt. He’d say, ‘I don’t need to see this, let’s move on.’ And we would. He didn’t suffer a fool.”

Dhuey recalls that people would dread getting into an elevator with Jobs. If you got on at the 4th floor, you’d better have captivated him by the time you got off on the 1st. Jobs remembered you when you had a great story to tell. He also remembered when you didn’t.

“He would ask you what you were working on, and people started to dread that question,” chuckles Dhuey. “Everyone started preparing questions to ask Steve in case they accidentally got in the elevator with him. A good question for Steve would keep the pressure off you.”

The types of people getting in elevators at Apple, the employees, are no slouches. These are very smart people doing interesting things. Dhuey was no exception. He began programming at age 14 at the University of Wisconsin-Milwaukee and by age 15 was working professionally as a programmer at Northwestern Mutual Life Insurance. He received his computer engineering degree in 1980 from the University of Wisconsin-Madison then worked at Apple Computer from 1980 to 2005. Design News nominated him for “Engineer of the Year” in 2006 and 2007.

Jobs didn’t care about resumes and awards, though. He cared about how that person was currently contributing to Apple. Jobs also cared about being efficient. When there wasn’t a question worth asking, or an answer worth telling, there would be silence.

“I remember going into work and it was always very quiet,” says Dhuey as he recalls the building where he and a dozen others had worked on the Macintosh II. “There were only about a dozen of us [in the Macintosh II department] and, though Steve had offices in more than one building, he had one in the corner of our building. He would sit in there and work quietly on an education computer. Several years later that would become the iMac.”

A little known-fact Dhuey recalls is that Jobs has hearing loss.

“When we did the iPod we had to make sure it would be loud enough for Steve to hear the music,” says Dhuey. “We had to balance his need for volume with a French law against things that were too loud. He tends to get early prototypes and these were built with Steve’s needs in mind.”

Dhuey learned that Jobs loved the Beatles and “standard pop music.” Dhuey also talks about how Jobs pushed against having noisy fans in any hardware. Perhaps this also had to do with his hearing issues.

“He didn’t like noise,” says Dhuey. “His products were all quiet and looked nice. That was his focus. He wasn’t interested in how the electronics were done. His role model was Sony, a consumer business with a consumer product. He thought their success was based on industrial design and smart pricing, and that’s what he emphasized at Apple.”

At the end of the interview, Dhuey reminds me of one of Jobs’ most obvious human-like failures: NeXT.

The computer industry hit a sales slump in 1984, and Apple was forced to conduct significant layoffs. The stress of the situation strained Jobs’ relationship with other Apple executives and at the end of May 1985, Jobs left Apple to create NeXT Computer. The company struggled to thrive when the expensive computers failed to fit mainstream wallets and needs. Only 50,000 machines were sold by 1993 and the company transitions to software-only. In 1996, Apple bought NeXT for $429 million, and reacquired Jobs as CEO. Jobs finally hit his stride, after a decade of struggling.

“As much as he had success with his return to Apple, he didn’t have that level of success with NeXT,” says Dhuey.

And despite Jobs’s obvious success at Apple, the company’s growth is not due to Jobs alone, says Dhuey.

“The media likes to create this impression that Steve is the only one who does anything at Apple, but the whole company isn’t run by one man.”