On top of the slew of news coming out of Microsoft’s Build 2016 developer conference, a story broke yesterday that Microsoft was building an ad blocker into its Microsoft Edge browser. While this would be a big deal, it apparently isn’t true. “We have no plans to build a native ad blocker into Microsoft Edge,” a Microsoft spokesperson told VentureBeat.

Ed Bott of ZDNet fame found the nugget of information in a slide during a session titled “Microsoft Edge: What’s Next for Microsoft’s New Browser and Web Platform.” As you can see below, item 4 clearly indicates plans to “build ad blocking features into the browser.” 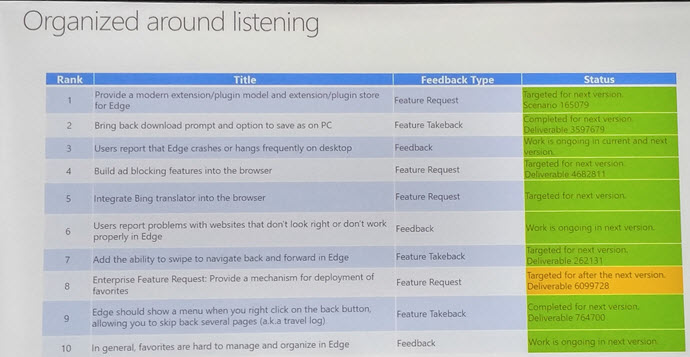 Microsoft is now labeling the slide as misleading, saying that it was simply referencing the fact that the company is building extension support into Edge. In other words, ad blocking is still coming, but it will work exactly like in any other desktop browser. Microsoft is not taking the bold step of offering a browser with ad blocking built in — at least for now, that will remain limited to niche browsers like Brave, from Mozilla cofounder Brendan Eich, and Adblock Browser, which is really just Firefox for Android with Adblock Plus.

Two weeks ago, Microsoft released a new Windows 10 preview build with Edge extension support, arguably the most important feature missing from the new browser. The company only released three extensions to testers (Mouse Gestures, Microsoft Translator, and Reddit Engagement Suite), promising more were on the way, including AdBlock and Adblock Plus.

Support for extensions was supposed to arrive by the end of 2015, but the feature was delayed until this year. Microsoft still hasn’t shared how long it plans to let testers play with it before releasing the functionality to all Windows 10 users, but apparently, according to yesterday’s misleading slide, the Edge team is targeting “the next version.”