Microsoft plans to bring its business intelligence tool Power BI to mobile platforms, starting with a native iOS app. The company sent out an email to prospective testers this week asking them if they have an iPhone or an iPad and if they want to “start exploring Power BI dashboards and reports on [their] mobile devices.”

Power BI provides data query, mapping, modeling, and interactive charting usually built on top of Excel. While Excel is designed for creating content, data models, and visualizations, Power BI is meant to be used to share, collaborate, and extend those insights. 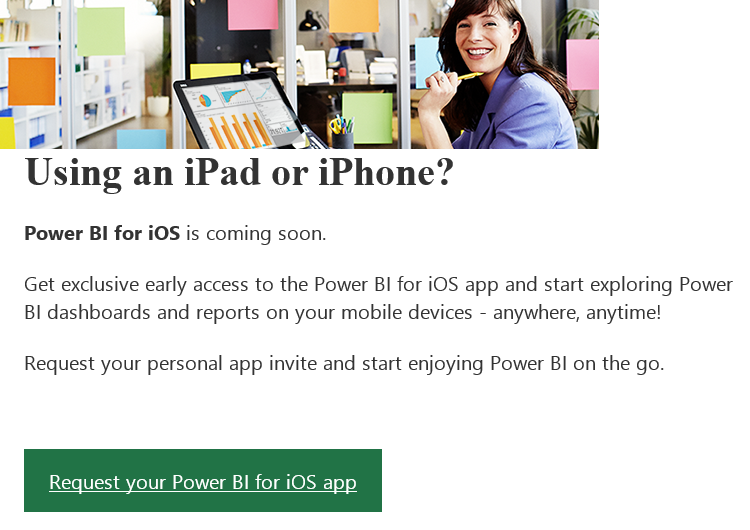 Today, Power BI isn’t available on mobile platforms. While Microsoft is planning to offer the tool on Android and Windows Phone as well, it is starting with iOS – a frustrating, but not uncommon, trend.

The email’s subject line was pretty straightforward: “Power BI for iOS is coming soon – request early access now.” A small screenshot of the app running on and iPhone and iPad was also included, but we were asked not to share it.

When we sent an email to find out more, we were asked the following three questions in a reply:

It’s not clear whether the iOS app will be free or not, but we’d wager Microsoft will simply offer it to its Office 365 customers. For now though, the app is still in private preview, and the company doesn’t have an official roadmap as to when it will be released publicly, or when previews will be available for other platforms. All we know is that a public release is currently planned.