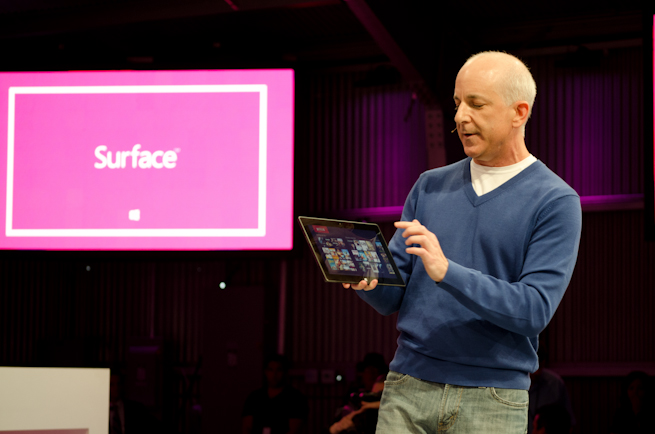 Surprise, surprise: Microsoft today officially unveiled its first branded tablet, the Windows 8-powered Microsoft Surface, at an event in Los Angeles. (Check out our live blog for the full rundown of the event.)

The announcement comes after a week of increasingly wild speculation — with some predicting that Microsoft was unveiling its own TV, or partnering with Barnes & Noble for some sort of tablet device. Instead, the Microsoft Surface is pretty much what many were expecting: a Windows 8 tablet that’s clearly geared at attacking the iPad.

“Just as we’ve reimagined Windows, we have a vision for the tablet,” said Microsoft’s Windows head Steven Sinofsky at the event. “It’s a tablet that works and plays the way you want to — a tablet that’s a great PC, a PC that’s a great tablet … Surface is a stage for Windows.”

The tablet itself is incredibly thin at just 9.33 millimeters, and it sports a 10.6-inch display. It runs Windows RT, the simplified Windows 8 variant meant for devices running ARM chips. The edges are beveled to make it easier to hold. Sinofsky claims that it’s the first PC with a magnesium case, and it weighs just 1.5 pounds. The Surface includes an integrated kickstand, so you can easily prop it up without the need for a cover.

On the surface (heh heh), the tablet doesn’t look much different from other Windows 8 slates that we’ve seen — but it’s in the accessories that Microsoft truly shows some innovation. In particular, the Surface’s magnetic cover is a stroke of genius, as it also double as an ultra-thin multitouch keyboard. You won’t be able to feel the click of keys, but it’ll allow for touch typing that’s far beyond typing on any tablet’s screen.

I was initially very wary of Microsoft offering its own tablet hardware, but there’s a surprising amount of polish in the Surface tablet and its accessories — something that makes me think this isn’t another hardware flop like the Zune or Kin.

Sinofsky showed off two Surface units, one running Windows RT and another running full-blown Windows 8 Pro with an Intel processor. The latter tablet is thicker and heavier, clocking in under 14 millimeters and less than two pounds, but unlike the thinner model, it’s a complete Windows PC capable of running older software.

The Surface also sports pen-based input — fulfilling Microsoft’s dream of effectively integrated pen computing in Windows, something that began in the 90s. It looks like the Surface’s pen is more attuned to the hardware than something like Samsung’s Galaxy Note, which should make it easier to take notes on the glass screen.

For those who just have to have tactile keyboard feedback, Microsoft is also offering the Type Cover, with more traditional keys.

The Microsoft Surface tablet for Windows RT will come in 32 gigabyte and 64 gigabyte variants, with pricing that’s “competitive with ARM tablets” (which could mean anywhere from $400 to $700). The Intel version of the tablet will be priced higher to fit in higher storage capacities (I’m expecting full SSDs).

“Microsoft entering the tablet arena is a potential ‘game changer’ — aside from Apple, there really hasn’t been a strong competitor with their own OS in the tablet space,” said Tom Burke, CEO of Trilibis, a leading provider of mobile development solutions and services. “With new tablets and mobile devices introduced at a staggering speed and changing user behaviors, companies need to start re-examining their web strategy and start thinking ‘mobile first.’”

Surface also presents a dilemma for Microsoft: The company is still relying on hardware partners to create compelling Windows 8 tablets and ultrabooks. With the Surface, Microsoft is selling a killer slate of its own, which will surely annoy its partners. Let’s not forget that the last time Microsoft did this, with its Play for Sure media device partners, it ended up releasing the Zune and killing off the Play for Sure program entirely.