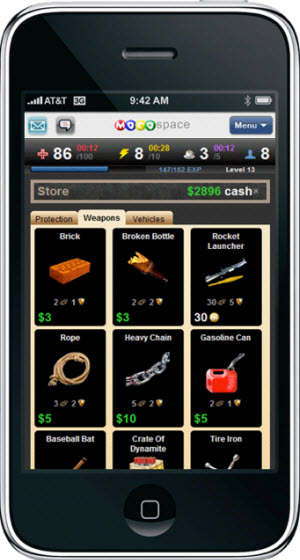 MocoSpace has made a big bet that browser-based games will take off on mobile phones as the mobile web comes of age. And now SoftBank Capital is making a bet that MocoSpace is right about that. Japan’s SoftBank is investing $3.5 million in MocoSpace in a strategic round.

Boston-based MocoSpace was founded in 2005 and has more than 14 million users for its browser-based games and entertainment on both feature phones and on smartphones, said Justin Siegel, chief executive of the company, in an interview. The company is already profitable, but Siegel said the investment will help it enjoy new support from SoftBank.

MocoSpace expects that entertainment on mobile phones will migrate from apps, which are the dominant delivery form today, to the mobile web. Under that model, users start web browsers and visit sites to play games or engage with other entertainment. On the MocoSpace site now, you can socialize via instant messenger or listen to music, play games, watch video and upload photos.

Siegel said the company will use the current funding to invest in the MocoSpace Games Platform, which third-party game developers can make games for.

Developers create their code in HTML5 web format and it will then run on any mobile browser. MocoSpace exists as a free app on iPhone and Android, but the user base will likely shift to the web over time.

The advantage is that developers can then create a game once and run it on any smartphone that runs HTML5. The disadvantage is that most users now use apps on platforms such as the iPhone and Google Android phones. That doesn’t deter Siegel, who expects a steady migration to mobile web applications in the coming years.

Already, MocoSpace users play about 1 million games on the mobile web site per month. But most of those games aren’t modern social games. MocoSpace will be launching its own browser-based social game soon and it will open the platform in early 2011 to third-party developers. The games will focus on casual content, not hardcore games.

“The browser is not the only way to go for mobile games, but we think it is a very big opportunity,” Siegel said.

MocoSpace’s current users generate 3 billion page views per month. The company’s application is free and supported by advertising, but Siegel said virtual goods transactions are a growing part of its business.

Rivals include other social networks such as MySpace, Facebook, and Twitter, to the degree they exist on mobile phones. It also competes with social mobile game platforms such as Apple’s Game Center, Ngmoco, Aurora Feint, Scoreloop and PapayaMobile.

Previous investors in MocoSpace include General Catalyst, Pilot Group, and angel investor Michael Dearing. Ron Fisher, managing partner at SoftBank Capital, will join MocoSpace’s board. MocoSpace has 35 employees. Founders Siegel and Jamie Hall have known each other since they were eight years old. Their previous company was JSmart, a mobile gaming company bought by SK Group. To date, the company has raised $10.5 million.