Facebook has crowned the winner of its first-ever Fb Start competition, a contest that sought to identify the best apps in the world that are part of its program aimed at helping mobile developers.

The grand prize winning team, which will receive $50,000 in cash and $25,000 in Facebook Ad Credit, is Beijing, China-based Hightalk Software, makers of MomentCam. The app, which allows users to easily create and share customized caricatures of people, has been downloaded more than 200 million times.

Fb Start also named a set of regional winners, each of which will get $5,000 in cash and $5,000 in Facebook Ad Credit. For Europe, the Middle East, and Africa, the winner was the London-based social polling app, Whichit, which also allows businesses to create poll-based coupons that lead to heavy customer engagement; for Latin America, it was Brazil’s Qranio, which incentivizes players to complete knowledge-based trivia quizzes; for North America, it was U.S.-based Workflow, which enables automating actions between apps on your iOS device. And the “social good” winner was Hunger Crunch, which helps people “fight hunger” through a series of real-world and virtual experiences. 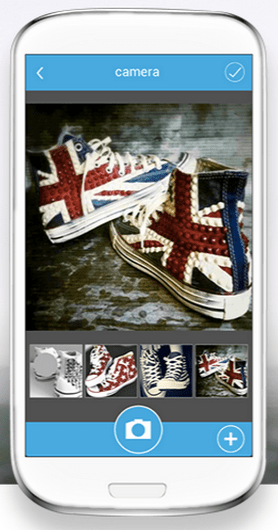 Above: Whichit, which lets users take social polls, was one of the regional winners of the Fb Start app competition.

According to Facebook, apps were judged based on four main criteria:

2. experience and design: is it optimized for a good user experience, and does it look and feel streamlined

3. efficiency at scale: how well does it utilize Facebook or other tools “to make app development and iteration efficient”

4. how well they leverage Facebook Platform: did the app developers make Facebook and/or Parse integral to the app?

Julien Codorniou, Facebook’s head of global platform partnerships, told VentureBeat that the selection of MomentCam “highlights the fact that we work with mainly mobile-first companies not based in Silicon Valley that are going through exponential growth.”

Speaking of MomentCam, he added, “These guys could be the poster child of the next generation of partners for Facebook.”

Codorniou said Facebook wants to support startups like those participating in the competition as well as it can. Speaking of MomentCam’s huge growth, he said, “When we see something amazing happening on the platform, like the growth of these guys, we tend to jump in and” help.

And while he noted that it’s critical for Facebook to “manage the big guys”
like Uber, Spotify, Candy Crush, and others, the social network is always looking for “the next generation of things.”

For his part, Filipe Santos, the director of international business for Hightalk Software, said Fb Start was instrumental in the creation of MomentCam in a number of ways. First and foremost, he said, was advice the Chinese-based company got from Facebook’s Singapore office, as well as the fact that the startup was able to count on using tools like MailChimp and SurveyMonkey that are supported by Facebook. That support, Santos said, gives the tools “credibility.” 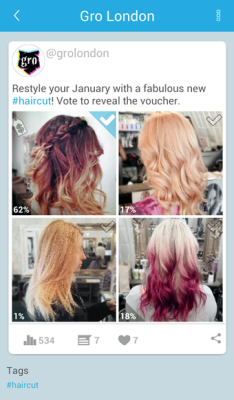 Above: Small and medium sized businesses can use Whichit to create ads with high engagement.

Santos also said Facebook supported his team’s use of Facebook ads, particularly when they wanted to do A/B testing. In the end, he said, being able to count on Facebook Platform made user acquisition “much cheaper” than what MomentCam had done before.

To Codorniou, one of the things Facebook likes to do — and which MomentCam and other apps in the Fb Start competition demonstrated — was building apps for multiple platforms.

Ultimately, that’s one of the biggest benefits Parse has brought to the Facebook development ecosystems. “This is exactly the vision of Parse,” he said. “This is why we bought the company. It’s faster to develop [simultaneously for iOS and Android]. That’s really the vision for the platform.”