Two days ago T-Mobile sent an email to Engadget to invite them to an press event on April 21st. Billed as a “private launch event,” it has tech blogs wondering what the news will be: Will the company be announcing a new Android device? Or maybe an update to the code developers use to build Android applications?

I touched base with some of my sources, and here’s what I was able to find out: On March 25, manufacturer HTC had one version of its Sapphire device passing through the Federal Communications Commission. The HTC product roadmap, however, has different Sapphires (1.0, 1.5, 2.0), and one of my sources told me that on April 21, T-Mobile will announce the Sapphire 1.0 as the G2 or whatever name the carrier lets customers choose for the device. My sources also told me that, at a later point, Open Handset Alliance (OHA) member Vodafone will release the Sapphire 1.5 as the G3 (called “Magic”) and another OHA member NTT DoCoMO will come out with the Sapphire 2.0 as the G4. French carrier Orange will also launch the Sapphire as a “G”, but my sources were not able to tell me which one.

So what’s the difference among the Sapphires, you wonder? The different versions mostly relate to different hardware requirements the carriers requested from HTC. The G2, for example, will have a 3.2 mega pixel camera, where the G3 will have a 5 mega pixel one.

So, while all this information is interesting to the gadget and Android lovers out there like me, the key here is that all the mystery surrounding the launch draws more coverage in the blogosphere and can help drive device sales.

Carriers and device makers have changed how they spread buzz on new offerings in recent months. Before, marketing campaigns focused on a short time span before a device launch and made fewer, bigger announcements. Now more and more device makers and carriers are running continuous marketing campaigns around their brands. This gives them more opportunities for announcements . . . and for tech blogs to speculate and drive consumer interest.

Apple’s shown this tactic works. A recent chart from Compete (below) measured recent “device interest share” of the RIM Blackberry Storm (Verizon), the HTC G1 (T-Mobile) and the Apple iPhone 3G (AT&T) around the time the G1 and the Storm launched. “Device demand” is a “measure of people who click on a company’s official product detail page of the device online.” This is a great indication of pre-purchase interest, according to Compete.

What you see is that iPhones have been able to top “device demand” even when the devices launched. Compete starts to track a device when it first shows up on a carrier’s website. The next slide shows some background of a dedicated marketing campaign T-Mobile did for the G1 launch. 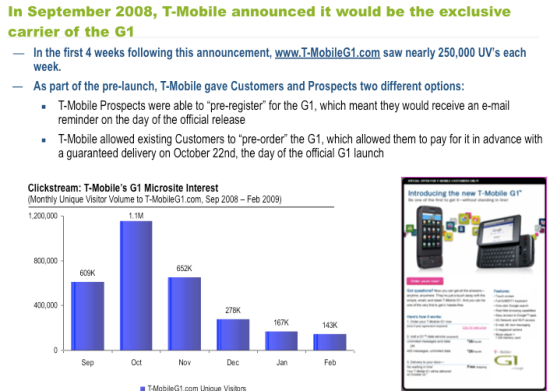 Now, fast forward to today. A lot of device makers — like Nokia — have increased the scope of their blogger activities, including device testing and review programs. At the same time it appears that industry conferences are losing importance as carriers choose to set up their own events to catch the digital media’s attention. Conference attendees at the recent Mobile World Conference in Barcelona were disappointed about how few spectacular device announcements were made (Vodafone’s “Magic” being the exception). Attendees at the recent CTIA conference were even more disappointed.

When I talked to a social media rep I’m friendly with about why carriers and device makers might be taking this new tack, I got the following response. “It’s simpler and more effective to deal with the few important tech blogs than with the important editorial offices. Dealing with editorial offices — calling them, trying to meet up with them, pitching — is time-consuming and often frustrating. We pitch for the one or the two articles the journalist can write to push our agenda. With a tech blogger, usually a couple of personal exchanges via email are enough. The blogger, then, can basically write daily updates on anything which may be relevant on the topic if he decides it’s relevant. In that way bloggers can push forward the story more naturally, which I frankly find more authentic. With all the social media it’s more about a conversation. And it seems to me as if via news aggregators like Techmeme the mainstream media are forced to pick up the big stories anyway. So overall, it appears to me that approach is more effective for us.”

Compete’s analyst Elaine Warner seems to think the trend is likely driven by RIM’s execution of a well-conceived digital and non-digital marketing strategy. To me, however, the chart, while showing the impressive success RIM has had with some extra digital and TV marketing effort, doesn’t show the full picture. As Warner points out, the chart shows only a part of consumer interest, as the vast majority of consumers do their online cell phone shopping at carrier websites (AT&T, VZW, etc.) rather than on the device-maker web sites Compete is measuring.
The chart is also misleading about the interest in the G1, as the OHA partners share the marketing effort among each other. Google’s keyword advertising, for example, comes to mind here. I also think certain devices got more traffic because of existing audiences. There were BlackBerry fans before the Storm and Bold. But, of course, the 3G iPhone had the mighty Apple tech press beating the drum for it. Nevertheless, more and more non-Apple enthusiasts are creating online blogs (such as TmoNews, which follows T-Mobile) to promote carriers and devices, so a more accurate picture of the cumulative web properties will eventually show an increasing amount of clicks across the board.

In another six months, when more “Gs” have rolled out, I expect Compete to show numbers demonstrating exactly that.