Mozilla today launched Firefox 69 for Windows, Mac, Linux, and Android. Firefox 69 includes third-party tracking cookies and cryptomining blocked by default, performance improvements on Windows 10, and better battery life on macOS, and it asks for permission before turning on Flash.

Firefox 69 for desktop is available for download now on Firefox.com, and all existing users should be able to upgrade to it automatically. The Android version is trickling out slowly on Google Play. According to Mozilla, Firefox has about 250 million active users, making it a major platform for web developers to consider.

Mozilla added basic Tracking Protection to Firefox 42’s private browsing mode in November 2015. The feature blocked website elements (ads, analytics trackers, and social share buttons). Firefox 57 arrived in November 2017 with an option to enable Tracking Protection outside of private browsing, but it wasn’t on by default (it could break websites and cut off revenue for content creators).

In June, Mozilla turned on Enhanced Tracking Protection for new downloads of Firefox as part of the Standard setting. Third-party tracking cookies from over 2,500 tracking domains are blocked without users having to change anything. For those who already had Firefox, Mozilla planned to roll out Enhanced Tracking Protection by default “in the coming months.” That time has now come. 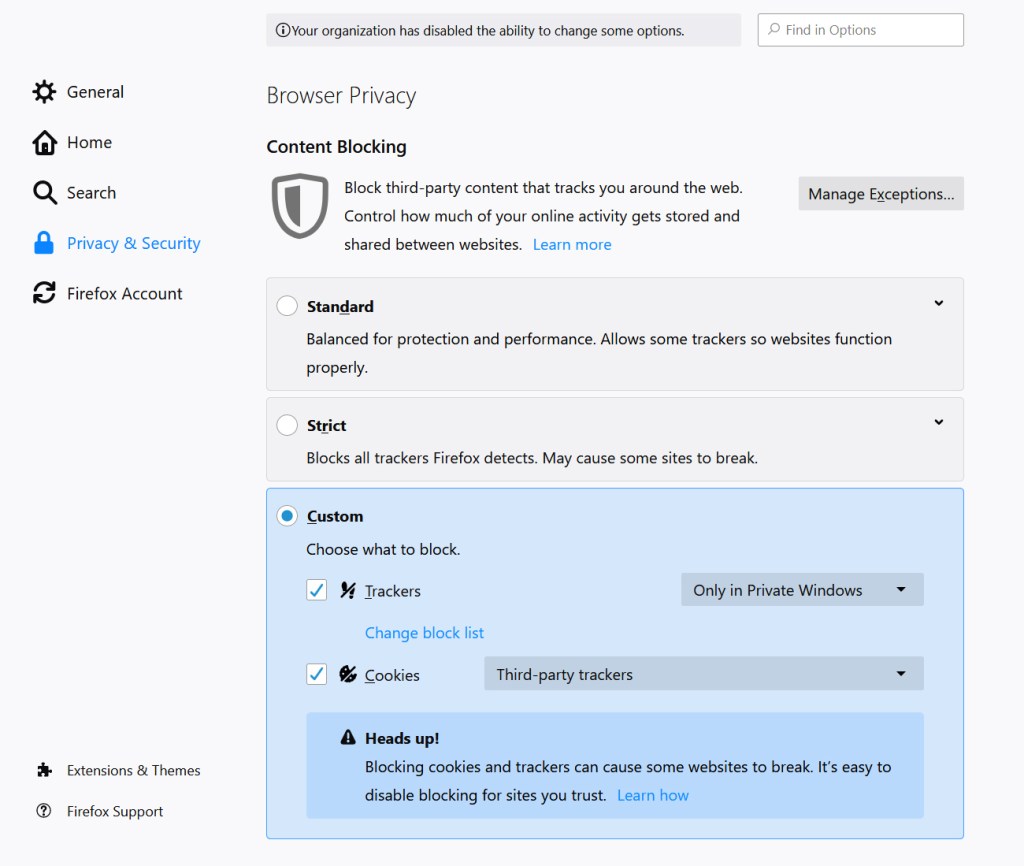 Enhanced Tracking Protection shows up as a shield icon in the address bar. Click on it, open the Content Blocking section, and then hit Cookies. The Blocking Tracking Cookies section shows the companies Firefox has blocked and lets you turn off blocking for a specific site. The feature focuses on third-party trackers (the ad industry) while allowing first-party cookies (logins, where you last left off, and so on).

As part of its crackdown, Mozilla also wanted to tackle cryptomining, which uses your CPU to generate cryptocurrency for someone else, and fingerprinting, which builds a digital fingerprint that tracks you across the web. The company started to test blocking cryptomining and fingerprinting in April. Then the options to block each one arrived with Firefox 67 in May.

Firefox users can access these options by either clicking on the small “i” icon in the address bar and clicking on the gear on the right side under Content Blocking or by going to Preferences, Privacy & Security, and then Content Blocking. From there, select Custom and check “Cryptominers” and/or “Fingerprinters.” Both were off by default. With Firefox 69, cryptomining is now blocked by default as part of the Standard setting. Firefox 69 also blocks fingerprinting as part of the Strict setting, and Mozilla plans to turn it on by default in a later release.

With Firefox 69, the browser will now always ask for your permission before turning on Flash content. This is ahead of Flash’s planned death in 2020.

If you’re a web developer, you’ll want to get more details here: Firefox 69 for developers.

Firefox 69 for Android is a minor release. That’s because the Android team is mainly focused on Firefox Preview.

Firefox for iOS also received an update today. The changelog is quite short: