Global identity verification provider Onfido today announced that it’s raised $50 million in funding led by Softbank Investment and Salesforce Ventures, with participation from M12 (formerly Microsoft Ventures), FinVC, and others. It brings the San Francisco company’s total venture capital raised to over $100 million, following a $30 million series C in September 2017 and a $25 million raise in April 2016, and will be used to “accelerate” its product development and expansion into Europe and Southeast Asia.

“We’re seeing new data breaches occur every day, resulting in millions of people’s private data ending up on the dark web,” said CEO and cofounder Husayn Kassai. “With this new funding, we can protect more businesses, in more countries — and in more ways — from the effects of fraud.”

Onfido — which was founded in 2012 by three Oxford University graduates who observed that background checks were largely done manually and were therefore prone to human error — develops a software-as-a-service (SaaS) platform that taps AI to perform background checks on would-be employees at each stage of the hiring and recruitment process. It initially targeted on-demand businesses and contract workers, but gradually expanded in scope to financial services and ecommerce — specifically identity checks for business in those verticals.

Here’s how it works: Employees for Onfido’s more than 1,500 customers (among them Handy, Work Market, Turo, BlaBlaCar, Square, Revolut, Indiegogo, Bitstamp, Orange, Remitly, and Zipcar) snap a selfie and a picture of their passport, driver’s license, identity card, or one of 600 other forms of identification. They perform a liveness check by following on-screen instructions involving one of several actions (like blinking, saying a sequence of numbers, or smiling), and then, using optical character recognition, facial biometrics, criminal records, driving misdemeanors records, and other checks, Onfido spits out a risk report indicating its confidence in the person’s identity. 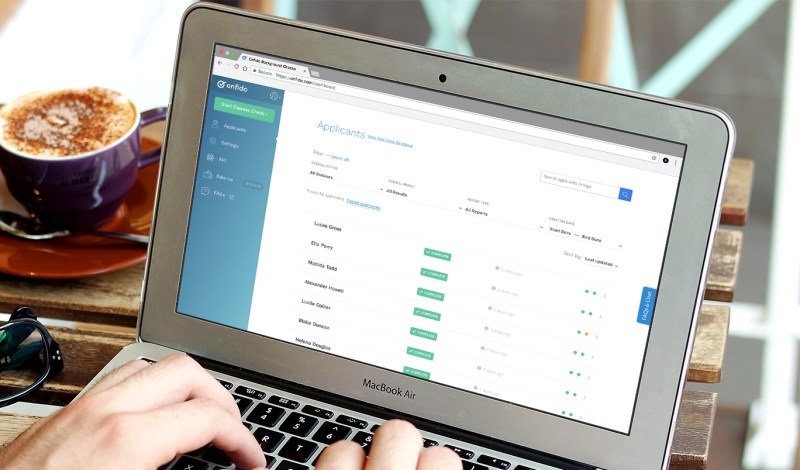 Onfido claims that its AI-driven platform can automate background checks in seconds across 192 countries, though it also leans on humans “to verify outliers.” And it says that its solution complies with Know Your Customer (KYC) and Anti-Money Laundering (AML) regulations, helping it to achieve fraud exposure rates as little as 0.19 percent.

“There has never been a more important time for companies to build trust with their customers by showing they are one step ahead of fraudsters,” said former vice chairman of Salesforce Frank van Veenendaal, who will join Onfido’s board of directors. “I believe Onfido has the unique opportunity to transform the digital identity market and deliver robust and scalable authentication-as-a-service, similar to how Salesforce transformed customer relationship management.”

Onfido says it has over 250 employees across offices in San Francisco, New York, Lisbon, Delhi, and Singapore in addition to its London headquarters.

“4.5 billion records were breached in the first half of 2018, and McKinsey has predicted the identity verification-as-a service market to hit $20 billion by 2022. So Onfido is very well placed to solidify its position as the global leader in identity verification,” said SBI Investment’s Tomoyuki Nii. “We chose to invest in Onfido because they have proven their expertise at using artificial intelligence to effectively fight fraud, giving businesses a safe and secure way to scale their businesses online.”