Pigment, which is setting out to “reboot the spreadsheet” and give businesses a “multidimensional view” of their data with its platform, has raised $25.9 million in a series A round of funding led by Blossom Capital.

Founded out of Paris in 2019, Pigment touts itself as a business forecasting platform that circumvents the limitations of “error-prone” spreadsheets and inflexible software to bring a “new standard” to planning and modeling. The platform is still in closed beta, though the company claims to have secured some undisclosed high-profile clients, including a major European bank and pre-IPO startups.

Pigment is entering a space occupied by some long-standing incumbents, including Anaplan, Workday (which acquired Adaptive Insights in 2018), and trusty old Microsoft Excel. But alongside its main lead investor, Pigment managed to attract a number of notable angel investors, including Paul Melchiorre, a former Anaplan exec who served as the company’s interim CEO before its 2018 IPO, former Workday CTO David Clarke, and the respective CEOs of esteemed enterprise companies Dataiku and Datadog.

Pigment’s founders say they are setting out to address three core problems in the planning and reporting process, including an inherent lack of transparency and insight into the data that underpins a business; the vast amount of data that needs to be processed; and the “static” way many current tools present that data, making it hard for anyone in the company to change or manipulate.

Pigment wants to help companies save time and money and sidestep the mistakes that hinder many organizations while adopting a more visual approach that allows users to tinker with various parameters and forecast continuously. This includes bringing potential future scenarios to life through simulations, charts, and models and enabling real-time strategic decisions based on that data. 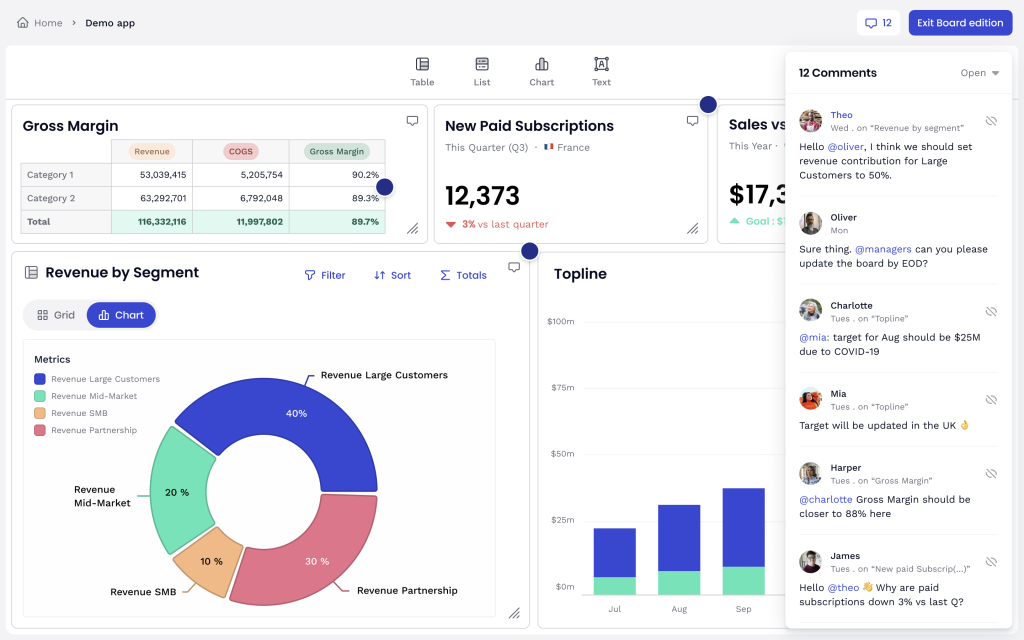 Above: Pigment promises a “visualy-driven” experience

But Pigment’s core selling point is arguably that it allows anyone in a company, not just a limited few in finance, to create forecasting applications, modify the parameters, and see where the company is heading. Crespo said Pigment enables users to create an app from scratch in days versus months.

“We believe modeling should be easy,” Crespo told VentureBeat. “In competitors’ platforms, only a handful of people have creation rights in the tool to build models. In Pigment, everyone can create an application and build their own model. We bring the right governance so that data can be shared easily while preserving access rights. This makes Pigment the proper solution for all business users within a company rather than just for the central finance team.”

With $25.9 million in the bank, the company said it is well-financed to scale up operations and engineering teams ahead of a full public launch next year. Other institutional investors in the series A round include New York-based FirstMark Capital and Frst.