Pocket, the service that lets you save content from across the web to read or watch later, has raised a further $7 million to grow its team and launch new products.

Led by New Enterprise Associates (NEA), this latest round takes the company’s total funding to $14.5 million to date, and sees Dayna Grayson, a general partner at NEA, join Pocket’s board of directors. Some interesting new entrants have joined the fray too, including Sound Ventures, a fund announced by actor Ashton Kutcher and talent manager Guy Oseary at SXSW.

Founded as “Read it Later” back in 2007, the San Francisco-based startup has built a solid following of users who, through browser plugins and mobile apps, can save anything they see on the Internet to consume at a later point. That catchy-titled article on Twitter you clicked on the way to work that’s 15,000 words long? Yup, that’s where Pocket has helped millions of people. 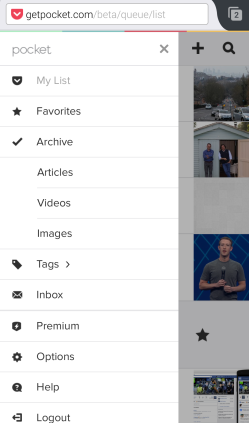 The app was rebranded as Pocket in 2012 with a new focus on media in general, including videos and photos, in addition to simple text-based articles. And today, with 17 million registered users, Pocket is marking its latest funding announcement with the launch of a new responsive web app that it hopes will serve as a bridge across all platforms.

While Pocket already has native apps for iOS and Android, the myriad of form factors means that a single solution that automatically molds itself to suit the screen of each user is a smart move. So anyone, regardless of whether they’re on Windows Phone, BlackBerry, Kindle Fire, Microsoft Surface, or a 30-inch all-in-one PC, will have a consistent, native-esque experience.

Almost a year on from Pocket’s last major news, when it went freemium and launched a handful of new (optional) premium features, today’s funding announcement also hints at what’s to come from the company moving forward — we’re promised some “incredible new things” later this year, according to Nate Weiner, founder and CEO of Pocket.