Rows, a German startup setting out to reimagine the spreadsheet with cloud-based team collaboration in mind, has raised $16 million in a series B round of funding led by Lakestar and launched its product in public beta after four years in development.

Few applications have gripped businesses like Excel, but despite a general disdain for Microsoft’s omnipresent spreadsheet and the myriad attempts to kill it off with modern alternatives, it’s estimated that at least 80% of businesses still use Excel.

Founded out of Berlin in 2016 as Dashdash before its rebrand just a few months back, Rows is targeting business teams with a new online spreadsheet platform that features native integrations with third-party services such as Salesforce, Slack, Stripe, Google Maps, and LinkedIn, while also making it easy to transform the spreadsheet into a fully functional web app in a single click. Moreover, Rows supports all the familiar Excel functions, such as SUMIFs, that business users are already accustomed to.

Rows could prove useful for developing apps such as order management systems directly from a spreadsheet.

Above: Rows: Easily turn spreadsheets into web apps such as order management systems.

Moreover, Rows can be configured to automatically import and export data from and to the original source, meaning that sales teams can update their CRM directly from inside a Rows spreadsheet, for example. And elsewhere, it can pull in website reports from Google Analytics; glean startup or investor data from Crunchbase; share prospect data with Salesforce; or translate texts with Google Translate. 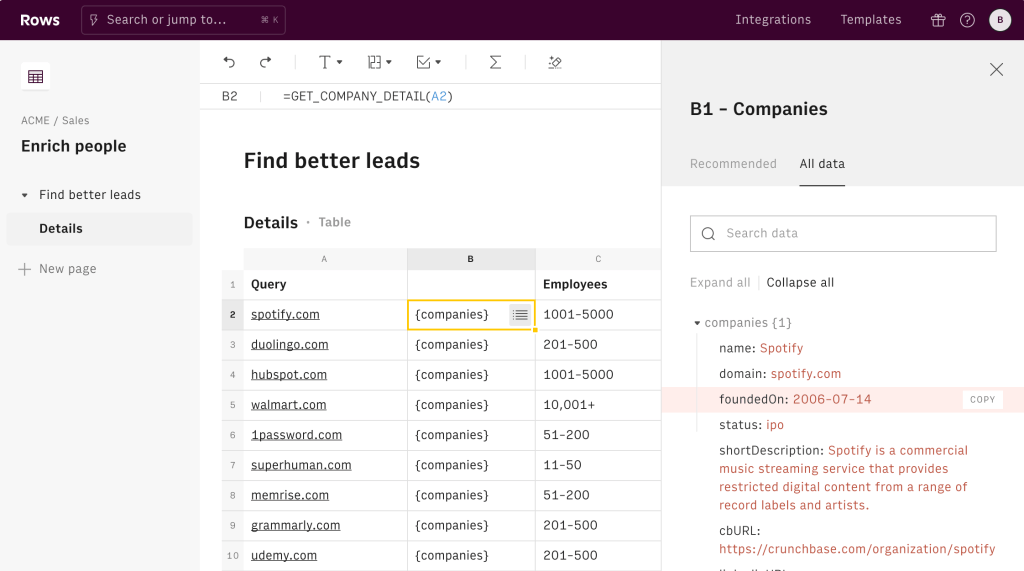 Above: Rows: Example integration to glean company data from Crunchbase.

Rows sits at the intersection of several trends in the software sphere, including low-code platforms, APIs, and the cloud. Indeed, no-code/low-code tools designed for the less technically inclined segments of the workforce are booming, spanning web development, enterprise app building, web testing, process automation, and more, while the API economy continues to flourish due in large part to the transition to cloud computing.

It has been a long road to launch for Rows, which wrote its first line of code in early 2017 and initially planned to hit the public sphere in late 2018 after its Accel-led $8 million series A investment. But the past four years have been spent iterating the product, ensuring that it’s ready for prime time.

“We decided in 2018 to keep the product private for longer so that we could onboard new users in person and learn from them about their usage and needs,” cofounder and COO Torben Schulz told VentureBeat.

During its early private beta phase, Schulz said that it attracted more than a thousand companies, and in the buildup to today’s public beta launch it released a further 10,000 accounts to its waiting list. “We also hired more than 30 people for our Porto and Berlin teams and released more than 200 features, 50 integrations, and our new subscription pricing,” Schulz added.

Rows is essentially targeting businesses of all sizes, with a growing list of enterprise-specific features that currently live under the “Workspaces for teams” umbrella. “Our workspaces let companies onboard people, give them different admin permissions, and also check the consumption of data and access to different APIs,” Schulz said. “We see a lot of potential to rein in the ‘shadow IT‘ organization with a central view of what goes in and out of spreadsheets in larger corporations.”

Starting today, anyone can start using Rows for free, with some restrictions in place in terms of the number of users and level of integrations and automation offered. Additional Plus, Pro, and Business tiers unlock incrementally more features ranging from $59 to $499 per month.

Aside from its lead investor Lakestar, Rows’ series B investment included contributions from Accel, Cherry Ventures, and Pitch CEO Christian Reber. The company said that it will use its new investment to “build out functionality” before shedding its beta tag later this year, while it also plans to open up its platform to the community to allow teams to “share and remix spreadsheets.”