As Salesforce president and chief product officer Bret Taylor explained during a conference call with reporters, blockchain delivers a distributed ledger that saves, traces, and authenticates data across decentralized network nodes, ensuring the integrity of transactions. It has its origins in cryptocurrency, but blockchain technology has been applied in recent years to asset tracking, credentialing, and goods and services verification.

Gartner predicts that blockchain will result in $176 billion in added business value by 2025, and $3.1 trillion by 2030. Internally, Salesforce reports that 72% of recently surveyed consumer and business customers believe it’ll transform their expectations of companies within the next five years.

“We help companies build for the future by making breakthrough technology accessible and easy to use — today we are doing just that with Salesforce Blockchain,” said Taylor. “Now, companies will be able to create new ecosystems and achieve new levels of interconnectivity through trusted partner networks.” 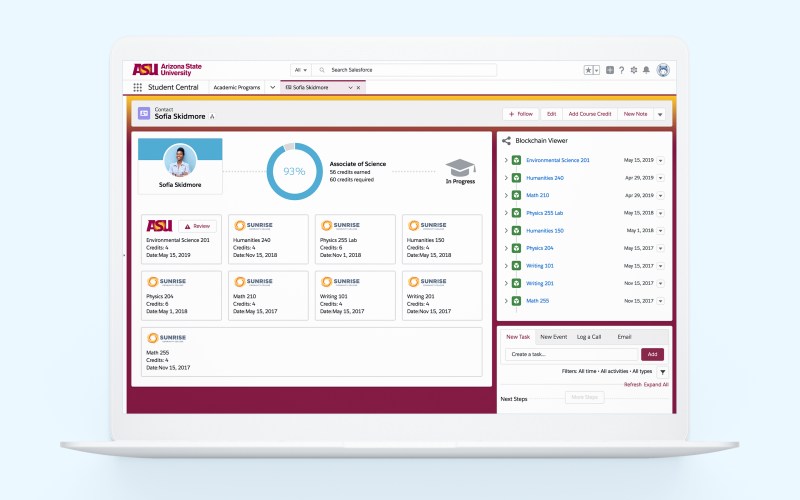 Salesforce Blockchain — which is currently available to select designer partners and is expected to become generally available in 2020 — is built on Hyperledger Sawtooth, an open source modular platform for designing, deploying, and running distributed ledgers, and it’s customized for Salesforce Lightning, Salesforce’s front-end framework for app development. It consists of three components: Blockchain Builder, a developer toolset for building blockchain applications; Blockchain Connect, which integrates blockchain actions with Salesforce apps; and Blockchain Engage, which enables customers to invite parties to blockchain apps created within Salesforce.

With Salesforce Blockchain, admins can build and maintain networks, apps, and smart contracts or create and share blockchain objects, and layer blockchain data on top of existing sales, services, and marketing flows like search queries and process automation. Salesforce Blockchain taps the company’s Einstein AI platform, which made its debut in September 2016 and which now powers more than four billion daily predictions across over 30 bespoke services, for deployable algorithms that incorporate blockchain data in sales forecasts, predictions, and more. Companies can pull in APIs or prebuilt apps, and integrate, interact with, and add existing third-party blockchains with Salesforce. 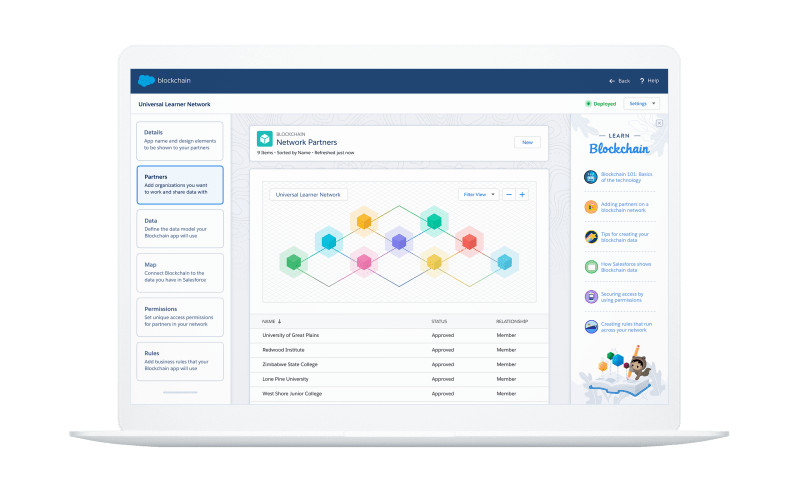 “The … reviews and approval process is very time consuming and requires multiple parties to ensure each business is evaluated accurately and completely,” said S&P Global Ratings global chief commercial officer Chris Heusler. “Leveraging Salesforce Blockchain, S&P Global Ratings has created a trusted network of reviewers, where everyone can work from a shared, transparent and auditable review process — completely reinventing and expediting how we do KYC reviews for our customers.”