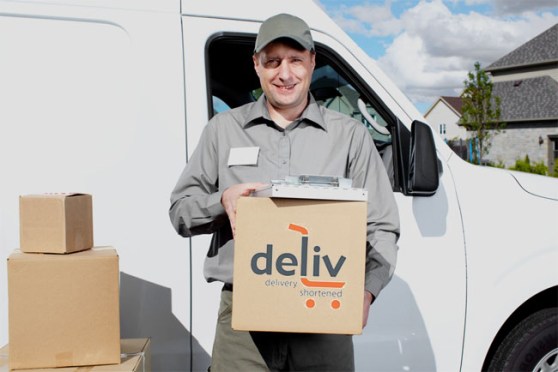 One company that thinks so is Deliv, a same-day retailer delivery service with a pretty different premise: Rather than employ an army of third-party couriers to do deliveries, Deliv wants to hire, well, you.

At the core of Deliv’s service is its heavily vetted crowdsourced driver workforce, which isn’t made up of pros but rather everyday folks. “These are not professional drivers. Most of them are college-educated with sales customer-service experience,” Deliv CEO Daphne Carmeli told me.

To anyone who has had a pizza delivery botched by a local punk, the prospect might be a bit worrying. Will anyone really want to trust their expensive purchases with some local nobody?

Above: Deliv’s software automatically awards deliveries to the workers with the best ratings.

The concern is a valid one, but it seems to be addressed from all sides by Deliv’s extensive filtering process. Between background checks, a tough certification process, audits, and a ratings system, Deliv is doing a lot to ensure that its drivers are professional ones. “It’s a very white glove experience,” Carmeli said.

That experience seems to be an attractive one for investors, who gave Deliv $1 million last month.

But let’s not get ahead of ourselves here. Does anyone actually want same-day delivery in the first place? Turns out the answer is yes — but with some caveats. According to Carmeli, while speed is cool, early Deliv users seem to be much more fond of something else: convenience.

“Giving customers the capability to specify when and where they want something is way more valuable than speed. Home or office — people can make that change very quickly,”  Carmeli said.

While the needs of consumers are obviously important, Deliv’s larger challenge now is convincing large retailers that its take on same-day delivery makes sense for them.

And from a business sense, it does: For companies like Wal-Mart (which is also playing around with its own crowdsourced delivery idea), the promise of same-day delivery means having another valuable weapon in the ongoing battle against Amazon, which is schooling just about everyone in ecommerce.

But Deliv thinks that retailers already have what it takes to out-Amazon Amazon: their physical locations.

“Retailers’ inventory, by nature of where they put their stories, lies within five miles of consumer populations. Their inventory is already where it needs to be, ” Carmeli said.

It’s an interesting idea, considering that brick-and-mortar stores have been major liabilities for retailers over the past few years. Not only are people using their local Best Buys as showrooms for Amazon, but physical locations cost lots of money — especially in busy metropolitan areas. Deliv, then, is important because it allows retailers to harness the power of those stores, changing them from liabilities to hugely effective assets. Not even Amazon can do that right now.

For the Wal-Marts and Best Buys of the world, the cure for showrooming could just be the showrooms themselves.