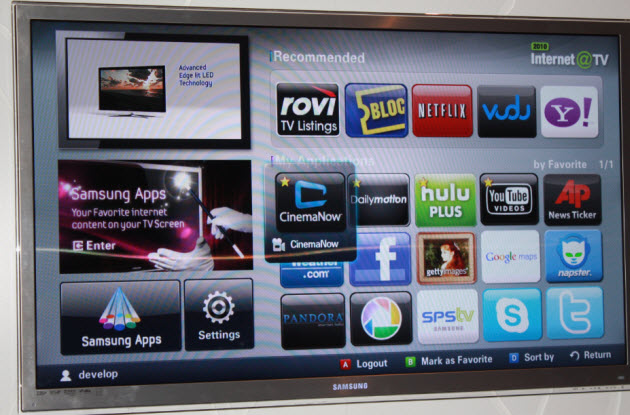 Samsung Electronics is going ga-ga over apps. The Korean electronics giant plans to spend $70 million marketing its Samsung TV apps for internet-connected TVs and other devices. 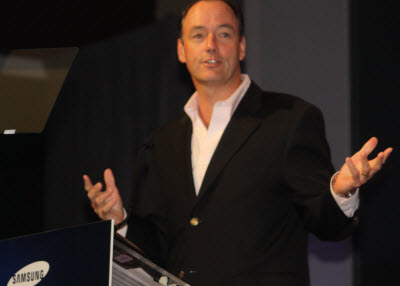 Building on Apple’s success with apps, the whole tech industry, from Intel to Samsung, is obsessed with creating app platforms now as the way to reach consumers who increasingly want personalized content wherever they are.

For three years, Samsung has been selling internet-connected TVs. In January, it announced it would create an apps platform for not only those TVs, but for all Samsung connected devices, including smartphones, Blu-ray players and other gadgets. Samsung calls the web-connected TVs, which can surf the web with the click of a remote control, smart TVs. About 17 percent of its TVs shipped this year will be connected. By 2014, the figure will be 70 percent.

“We are determined to accelerate smart TV adoption in 2010,” Tim Baxter (above), president of Samsung Electronics America, said today at the company’s app developer day event in San Jose, Calif. “People want choice and control. With our apps, we can change how they choose, discover, and access content on the TV.” 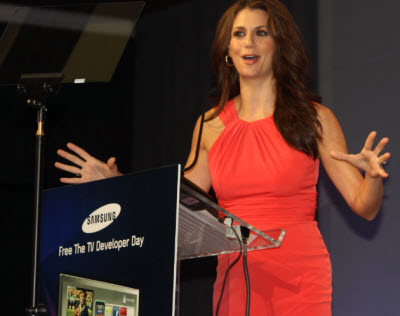 Besides spending the $70 million on marketing, Samsung is also giving away a prize of $500,000 in a Free the TV contest for developers who make the best apps, said Eric Anderson, vice president of content and product solution at Samsung Electronics America. The company enlisted Entertainment Tonight host Samantha Harris (right) to emcee the event and invited luminaries such as Apple co-founder Steve Wozniak and ESPN’s Charles Pagano to talk.

In five months, the company said the number of apps has doubled, though it is still small. By the end of the year, that number will hit 200, Anderson said. They include apps such as ESPN’s Next Level app for sports fans.

Other TV makers are scrambling to create app platforms, which have become fashionable ever since Apple created the highly successful App Store for the iPhone just a few years ago. Samsung says it is the first TV maker to create a developer-friendly software development kit, or SDK. The platform enables paid apps. And it lets developers decide how much to charge for their apps, what countries to launch them in, and what devices they will be on. 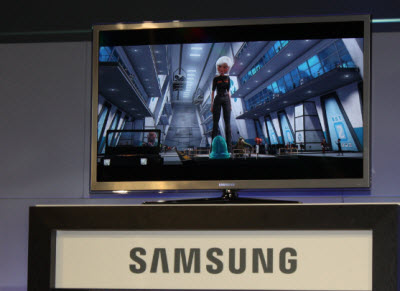 Anderson said the focus will be on delivering quality apps that look good on a big screen and can be adapted for small screens on smartphones. B.K. Yoon, head of Samsung’s display division, said that apps on TVs will be the biggest change in the TV experience since the introduction of the digital video recorder.

“The linchpin of the strategy is the TV,” Baxter said.

Turning couch potatoes into app users doesn’t sound easy. But Samsung says 50 percent of the consumers who have bought internet-connected TVs this year have activated their Samsung apps. Samsung also says it has a lot of cloud to make apps on TV and other devices happen. The company sells 45 million TVs a year and more than 227 million mobile phones. In 45 days, it has sold 1 million Samsung Galaxy S smartphones in the U.S. Samsung says it has been the No. 1 TV brand in the U.S. for the past five years with 37 percent of the U.S. TV market share in 2010. About 30 models of Samsung TVs are now web-connected. 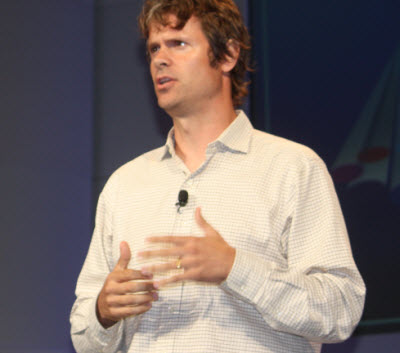 Tim Westergren (right), founder of online music service Pandora, said at the event that his decade-old company is activating 100,000 new users a day on mobile devices for the company’s internet radio app. Pandora is now available on 32 Samsung devices. A number of those are custom apps, but over time the point is to create one app that runs on all devices. Westergren said the noise in the ecosystem is clearing out and the platforms are becoming solid.

“This is all happening in a hurry for the devices that are going into the home,” Westergren said. “You could make an app that is part of this massive sea change, across tens of millions of TVs at some point.”