Linden Lab has invested heavily in virtual reality destination Sansar, a collection of VR experiences that anyone can create or visit. But now the company behind the Second Life virtual world is bringing more mass to Sansar with a better avatar editor, a core gathering hub, and corporate partnerships.

Sansar’s goal is to enable people to easily create, share, and monetize their own multi-user, interactive virtual experiences without requiring engineering resources. I went to see a demo of the latest Sansar technology in San Francisco.

So it is launching a redesigned avatar editor that lets you use sliders and skin shades to create just about any kind of person imaginable.

Linden Lab wants Sansar to be a platform for virtual reality as well as an oasis for self-expression, live events, and creation in a virtual world, where players can shape the narrative as it unfolds. 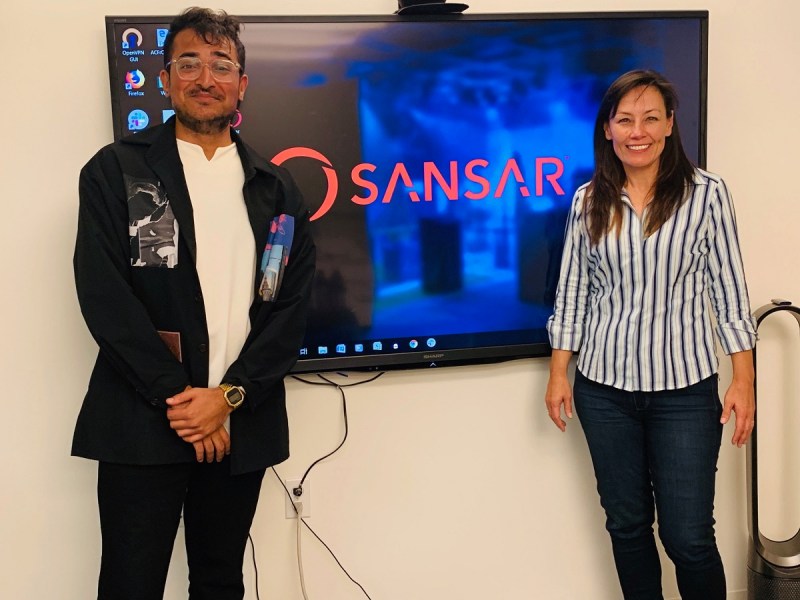 Above: Hari Raghavan and Sheri Bryant of Linden Lab.

To mark this new chapter, Sansar is collaborating with visionary brands on several marquee live events this week. These include Bunkr Live: Steve Void & Jay Pryor, live at 10 a.m. Pacific time on September 25. The event is a global celebration of the Fnatic esports brand,  Virgin EMI, and music from DJs Steve Void and Jay Pryor.

“Spinnin’ Records is proud of the collaboration with Linden Lab and the upcoming event with Blasterjaxx in Sansar,” says Steven de Graaf, the commercial director for Spinnin’ Records, in a statement. “This new and innovative way of music entertainment is something Spinnin’ Records really wants to embrace and explore more and more. The music of Spinnin’ Records and Gaming in general are a great match, and for our DJs, a great way to get in contact with new fans.”

Sansar is also debuting a new VR world from Sanrio — dubbed Sanrio World — complete with interactive games and merchandise – all in anticipation of Hello Kitty’s 45th anniversary in November and Sanrio’s 60th in 2020.

The Levi’s Hello Kitty capsule collection will also be featured as well with the ability to link out to their online customization for Levis X Hello Kitty. Fans will be able to demo Sanrio World live at TwitchCon 2019, at booth No. 317 on September 27 to September 29 in San Diego.

“We will eventually showcase 20 pieces of original Sanrio items that you can purchase in VR and wear in real life,” said Sheri Bryant, head of strategic business and marketing at Linden Lab, in an interview.

This new vision cements Sansar’s place as the innovator of live events in the virtual space. With more collaborations on the horizon, Sansar aims to push the envelope on virtual events and commerce, with a slate of new music partnerships to be announced soon. 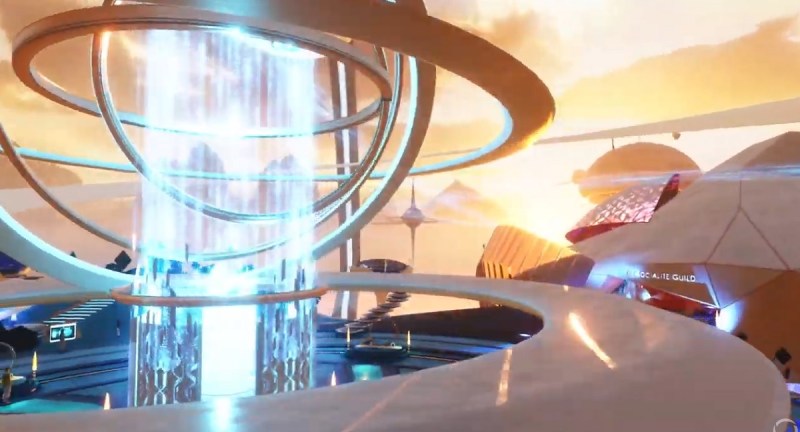 Above: Nexus is the new central world in Sansar.

Sansar is also enriching the user experience with new layers of mission-driven gameplay. All users now land at the Nexus — the new central world in Sansar, from which all other worlds can be discovered — and meet Agent Primus, a sentient AI and core character in the Sansar universe.

As their guide, Primus assigns them quests that unlock rewards and help introduce new elements of the Sansar story, including other characters. As they complete more quests over time, users can level up and gain access to player-driven guilds sorted by quests, activities, and interests – all thanks to new capabilities for XP and progressive titling.

I went inside the Nexus with Hari Raghavan, senior marketing manager at Linden Lab, and Bryant. We stumbled into a place where I briefly chatted with Ebbe Altberg, CEO of Linden Lab, who was looking for someone he was supposed to meet with. The Nexus was like a scene out of a science fiction world. It was a place where you could walk up to portals and instantly transport yourself into someone’s VR space.

“We’ve got a higher level of the story,” Raghavan said in an interview while we were standing in the VR space. “This is a central place where we surface all the worlds. It’s our prime portal.”

We all sported avatars and teleported from spot to spot. I checked out the Monstercat world, which included a giant DJ turntable device, and I played around in the Sanrio World. I was tossing beanbags at a cornhole and played with little bouncing donuts.

Through an all-new avatar editor, Sansar is enabling deeper levels of immersion, creativity, and roleplay. With expanded capabilities for bone deformation and blend morphing, this new feature takes self-expression to new heights, letting players create avatars that look as fantastic or realistic as they choose. They control who and what they are, and how they tell their story.

Creators will now find that the Avatar 2.0 editor in Sansar is more like the sophisticated editors you can find in games such as The Sims 4 from Electronic Arts.

“The big change here is that we are basically like a much deeper level of customization,” said Raghavan in an interview with VentureBeat. “So in this first iteration, you can do all kinds of really crazy things to make avatars look as fantastic or realistic as you choose.”

You can morph faces, deform parts of the face, and more. In the future, you’ll be able to play around with skin color, skin texture, and even body types.