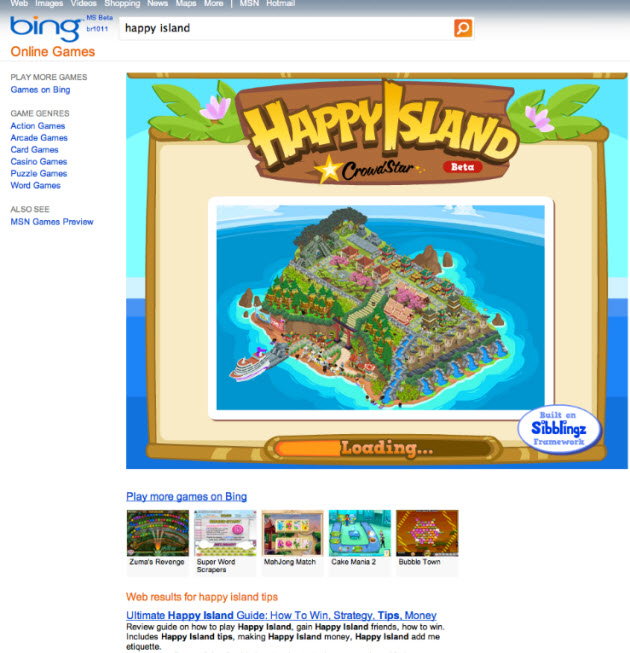 Sibblingz, a startup that makes it easy to launch an app across different game platforms, is announcing today it can put social games inside Microsoft’s Bing search engine.

The idea is a novel one and it fits with the notion that social games can be played anywhere that users are, whether that’s on Facebook, on the iPhone, or even while searching the internet. With the addition of Bing, Sibblingz becomes more attractive for developers. Essentially, it allows the developers to create a game once and then deploy it on Facebook, a web site, the iPhone, or Bing. The players can access their own game — with their own unique data — from any of the platforms. They can also play with players who are playing the game on a different platform. Usually, game developers have to painstakingly adapt a game so it runs on different platforms.

The version of Happy Island for Bing will have a new mini-game unique to the search engine. Customers using Bing can play and progress through the first levels of Happy Island without having to sign in. They will also be able to log in using Facebook account and associate their game environment with their Facebook friends. The move comes shortly after Microsoft and CrowdStar, which is a sister company to Sibblingz (both have the incubator YouWeb as a major investor), struck a deal.

It took a very short time to adapt the Happy Island game to run on Bing, thanks to the cross-platform nature of Sibblingz. The companies say it took a lot less engineering time to implement the integration with Bing. That’s important in the social game industry where speed is critical. Ben Savage, chief executive of Sibblingz in Burlingame, Calif., said, “With this partnership, we’re really thinking outside the Facebook canvas.”

The appeal of Sibblingz is that it makes developers less dependent on any one platform and thus makes them more independent. Happy Island has millions of users, mostly on Facebook. But Sibblingz adapted the game to run on mobile social networks in Japan as well.