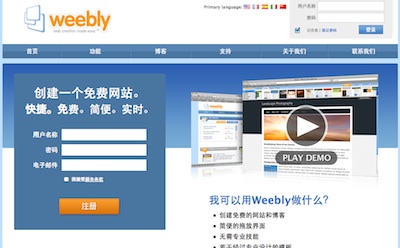 Weebly, the most popular among a batch of startups offering easy-to-use website building tools, is settings its sights overseas with the launch of its first foreign-language services.

The San Francisco company already offered country-specific domains (such as .co.uk domains in the United Kingdom), but to reach a big international audience you need to speak their language. Weebly is making that happen starting today with the launch of sites in French, Italian, Spanish, and Chinese.

Co-founder and chief executive David Rusenko said the San Francisco company saved money by having the initial translation done by users, then having professional reviewers double-check those translations. The site’s features are the same across each language, he said.

Rusenko said that Weebly is “smoking” its competitors in traffic — he pointed me to the chart from Compete below comparing Weebly’s traffic to competitors like Yola and Jimdo. New languages should help Weebly widen that lead. (Yola has also said international support is a big part of its strategy this year.) For now, Rusenko said he hopes to start building Weebly’s global audience by taking advantage of the site’s existing momentum, rather than doing a big marketing push in each country.

“Once we can justify spending more time in that country, we’ll be fostering the growth more individually in each country for sure,” he added.

Weebly passed the 3 million user mark earlier this year. It has raised $650,000 from Ron Conway and other angel investors and was incubated by Y Combinator.