Privacy-focused API platform Skyflow has raised $17.5 million in a series A round of funding led by Canvas Ventures.

Founded out of Palo Alto, California in 2019, Skyflow has developed what it calls a cloud-native “data privacy vault” that enables third-party developers to easily build applications and workflows without having to worry about data privacy or compliance. “It allows companies to securely store, use, and process sensitive data,” CEO Anshu Sharma told VentureBeat.

Skyflow exists at the intersection of two distinct but notable technology trends: data privacy and application programming interfaces (APIs). The thorny issue of data privacy is rarely out of the headlines, thanks to a steady stream of high-profile breaches. And with a growing number of privacy regulations in force, such as GDPR in Europe and CCPA in California, businesses are under increasing pressure to not only comply with regulations but also demonstrate that they’re treating customers’ personal information with kid gloves.

The rise of the API economy was already well underway before the pandemic, as companies were transitioning their software from tightly woven, monolithic entities to applications built upon microservices. These smaller, function-based components connect together via APIs,  which are easier to build and maintain. As more companies transition to the cloud to bolster their digital operations in 2020 and beyond, demand for APIs will continue to grow, and investors have taken note. In the past seven months alone, API development platform Postman raised $150 million at a $2 billion valuation, API marketplace RapidAPI secured $25 million, and health data-sharing platform Human API locked down $20 million in funding.

But rushing to the cloud opens a Pandora’s box of privacy issues, which is where Skyflow aims to help. Each company and industry has its own unique combination of customer data to secure — be that payment information, healthcare data, or social security numbers — and Skyflow offers specific vaults for specific use cases. 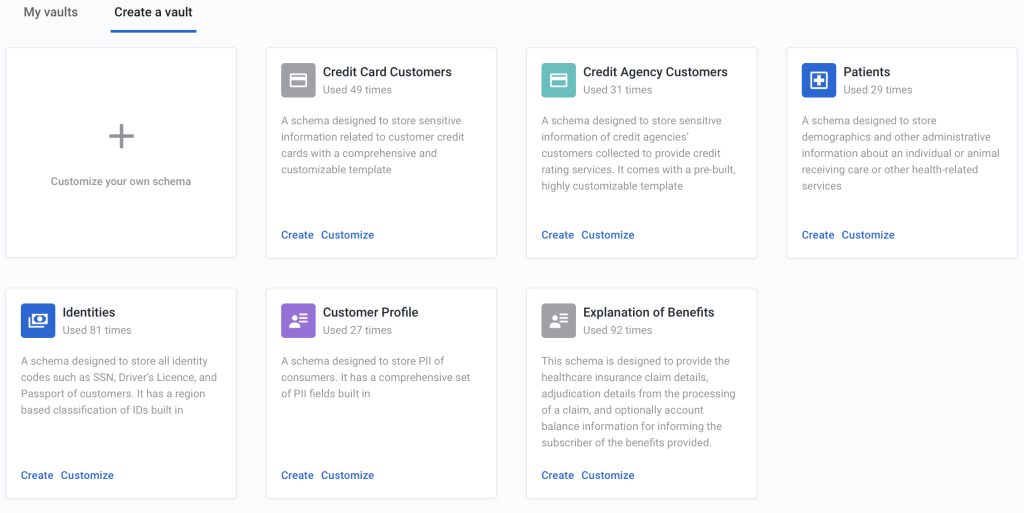 Above: Screenshot of how software developers work with the Skyflow data privacy vault to apply data schemes by use case.

Companies are increasingly tackling the data privacy problem from multiple angles. This includes areas such as compliance and PII (personally identifiable information) data search and discovery, with the likes of OneTrust, BigID, Collibra, and Transcend all raising sizable investments over the past year.

Skyflow is looking beyond compliance to get to the root of the privacy problem, targeting chief technology officers (CTOs) rather than chief information security officers (CISO).

“Despite billions of dollars in security and compliance spend, customer data keeps getting stolen,” Sharma said. “It’s as if the billions of dollars are being spent on security and compliance tools that don’t really solve the problem. The reason may be that they are trying to solve for blame rather than attack the heart of the problem. Skyflow is directed at the CTO who wants to build customer data privacy right into their data architecture.”

Similar to the way Twilio and Stripe specialize in core competencies to keep customers from having to build cloud communications or payments expertise and infrastructure, Skyflow sells privacy expertise and infrastructure. It has developed what it calls a “proprietary polymorphic encryption engine” that leverages encryption schemes for different data types, such as phone numbers, social security numbers, and email addresses, allowing businesses to run analytics and harness data that is never decrypted. Zero trust architecture is the name of the game here.

“Skyflow asked a simple question: What do leading companies like Apple, Netflix, Goldman Sachs, and others do to protect sensitive data? It turns out they store, manage, and govern all sensitive data in a logically centralized vault,” Sharma explained. “It takes a specialized army of engineers to build something like this. You need experts in encryption, databases, security, tokenization, key management, recovery, and so much more.”

Sharma is a former Salesforce product management VP who became an investor before cofounding Skyflow in mid-2019. He said his company has amassed a team of more than 35 engineers from companies like Salesforce, Google, and PayPal. He also claimed that since the product’s launch in July, Skyflow has seen “revenue grow to millions.”

Skyflow raised $7.5 million in a seed round of funding announced in May. With another $17.5 million round, which included existing investor Foundation Capital, the company plans to expand vertical-specific niches for health, finance, and consumer-focused companies and double its headcount across engineering, operations, sales, and marketing to more than 80.