The online video site formerly known as Grouper — the one purchased by Sony for $65 million last August — has a new name and a new direction.

Now Crackle, it will be a Sony Pictures-backed online talent studio (our previous coverage here).

The hope is that in between Hollywood and YouTube, there is an opportunity to bring together nascent actors and film-makers and turn them into tomorrow’s silver-screen stars. A “pathway to Hollywood,” according to Crackle/Grouper co-founder Josh Felser.

If Crackle goes according to plan — if production quality starts to drive more traffic — it could turn into an online version of TV contest shows like American Idol, where stars are born out of a combination of judges’ decisions and popular vote. Its site is live as of Monday morning. Check out Handshake, a somewhat disturbing video on the front-page, for example (screenshot below).

YouTube, though, appears to be growing faster and at a larger scale than any of its competitors. In fact, stars are already being born out of it, just like what Crackle is trying to do now. Just about everyone else is doing something similar from Metacafe to 60 Frames.

Crackle has been evolving steadily over the last three and a half years. Now, it will keep its existing features, such as sharing and viewing video clips online. Helped with Sony backing, Crackle will also fund production, sign deals with promising artists, and market videos across the web.

For example, Sony’s Imageworks studio will work with animators creating videos for Crackle. Every three months, the best animated video — as selected by users and Crackle editors — will receive a cash prize and fly to LA to pitch Sony executives on a theatrical release. Under Sony’s umbrella, the best animations will also be eligible for an academy award in the category (among thousands of others, of course).

As part of the re-launch, Crackle is introducing 12 branded channels with unique foci; four, including the one for animation, will be “pathways.” Every channel will be open for user submissions. Another question: Will more top Hollywood stars move into open, online video distribution, like what Will Ferrell is already doing? Will they want to work with Sony/Crackle, or go their own way?

Besides funneling talent to other Sony (and Hollywood) properties, the channels are also open for sponsorship by advertisers.

Crackle will also try to distinguish itself by a better user experience: displaying videos in a larger format, where users can keep one video playing while searching through others on the site.

These days, it’s hard to build an online video-sharing property with compelling content, and even harder to monetize with advertising, Felser said. The site has grown to 25 million unique visitors in June from 7 million last August, he says, but notes that its ad-based revenue model isn’t a big business.

Other partners include Sony’s Television and Imageworks studios, Columbia Pictures and IMPROV Comedy Lab. Videos will be distributed across the web and Sony devices (including the PSP, VAIO and BRAVIA).

Is Google a threat here? Would it try to buy its way into Hollywood, taking YouTube upmarket? Felser thinks that it would be hard even for Google to buy its way in. We’ve also covering how private equity, venture capitalists — and really, anyone with money — are buying in.

The bigger question: Can talented, aspiring actors, animators and producers get more out of a site like Crackle than out of Hollywood and YouTube today? And, will users care about Crackle’s higher-quality video technology?

Bonus: Varying VC thoughts on the Sony purchase of Grouper. 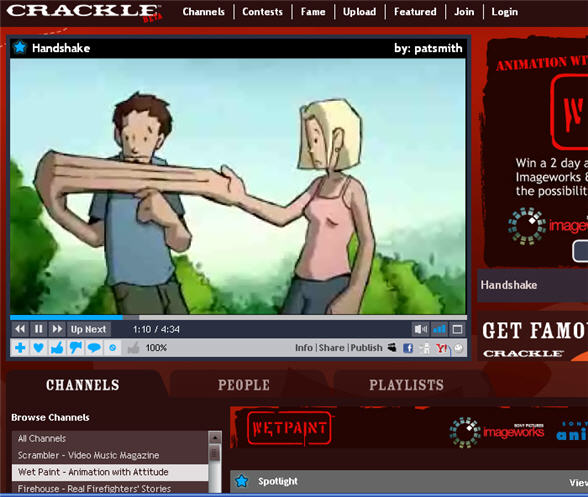