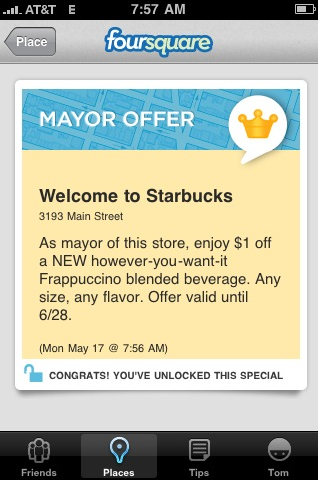 Becoming a Foursquare mayor is not about just bragging rights anymore. The coffee chain Starbucks announced today that it has started a nationwide “mayor reward” program with the popular location-based service.

On the game-like location-based service, users have long been able to claim the title of mayor at businesses like Starbucks coffee shops by “checking in,” or announcing their presence to friends. Starbucks is now rewarding the mayors by knocking one dollar off the price of a frappucino, Mashable reported.

News about Foursquare’s deals with major brands such as Starbucks, MTV, PepsiCo and Bravo have been making the rounds for a while. The MTV collaboration lets Foursquare users check out celebrity tips and check-ins, while Starbucks has a “Barista Badge” on the gaming app that users can claim after five check-ins at a coffee shop. However, the Frappuccino discount is the first time that Foursquare’s check-in feature actually saves Starbucks customers money.

One dollar off Starbucks’ high-margin Frappucinos that usually run around $4 or more isn’t too significant of a discount. It probably won’t turn patrons into check-in hounds competing for the mayorship by any means necessary. Rather, it’s a nice bonus for the person who achieves the title, and probably works as a reminder to keep checking in at a Starbucks.

The coffee chain says that this is a one-time test, significant mostly because of its scale: Starbucks has more than 11,000 U.S. stores. It’s the first in a series of loyalty programs Starbucks plans to explore with Foursquare. The coffee giant seems to be testing the waters and seeing what type of mayor reward would best suit the brand. This particular program ends June 28.

For Foursquare, the collaboration is a big deal because they are not only getting validation for the whole concept of checking in, but trust from a major brand choosing to use Foursquare’s platform rather than build location-based services on its own. (For another take on checking in, see what Booyah CEO Keith Lee has to say about it here.)

As everyone in the location space is waiting for Facebook to roll out its location features, this is an indication that Foursquare, currently over a million users, and others are a force to be reckoned with even as Facebook expects to announce 500 million users by the end of June.

And for Starbucks? The company will get customer statistics and analysis tools from Foursquare, giving the company an idea of who are the most active users, what time do most check-ins occur, and what percentage of customers post their check-in on Facebook or Twitter, further spreading the word. So, if a loyal customer seems to fall behind on their caffeine intake, Starbucks could conceivably offer them a personalized incentive to drop their Peet’s soy latte and head back.