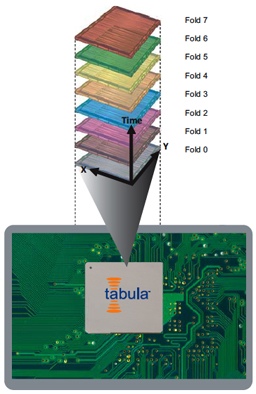 Chip company Tabula, which has developed a semiconductor architecture that it boasts gives it a significant advantage over competitors, has just announced one of the largest rounds in a decade for a chip company. It has raised $108 million in a fourth round of funding, from venture capital firms including DAG, Benchmark, Greylock, NEA and Crosslink.

The company makes programmable chips that it says can support almost any electronic device, from HDTVs, to MRI machines to Internet routers.

The company says its competitors Altera and Xilinx serve a $5 billion market. But it says it can create programmable logic devices for $200, compared to a cost of more than $1,000 offered by these competitors (and as Georgi points out in the comments below, Tabula has apparently poached key people from those competitors). The company boasts a “3D chip architecture” that is called Spacetime, with “time” being the third dimension of the 3D architecture. Heady stuff. Tabula’s product has between “2x to 4x the advantages over 40nm Xilinx and Altera high-end FPGAs and will target the sweet spot of the communications infrastructure market (Cisco, Alcatel, Juniper, Huawei, Etc.),” the company said in a statement.

The company, based in the heart of Silicon Valley, where silicon-based chip companies have traditionally been based (Santa Clara, Calif.), has now raised a total of $214 million.

The company says it was able to raise such a large round because programmable logic device (PLD) chips are the most profitable sector in the semiconductor market, with gross margins of 65 percent. It says it can take market share from ASIC suppliers such as IBM and NEC and ASSP suppliers like Broadcom and Marvell, which it says account for a “$105 billion opportunity.”

The company cites data from the Global Semiconductor Alliance to claim the round is the largest in a decade, however the WSJ reports calls its bluff, noting that one chip company, Cortina Systems, raised $132 million in 2006. (Update: Tabula responds by saying Cortina was a “special case as they raised capital to fund a $100M purchase of the Intel optical components business.”)

The company also announced that Cisco Systems is a customer.