Serverless computing is a type of cloud service where the hosting provider allocates adequate resources for you on the fly rather than making you pay for dedicated servers or capacity in advance. It’s a major technological breakthrough, and we expect to see a significant inflection point soon in this nascent market.

Serverless computing is the next phase in the evolution of IaaS (Infrastructure-as-a-Service). It completely abstracts the underlying infrastructure from developers and essentially virtualizes runtime and operational management. Oftentimes called FaaS (Function-as-a-Service), serverless architecture lets you execute a given task without worrying about servers, virtual machines, or the underlying compute resources.

There are a few clear advantages in the adoption of serverless technology:

Agility – Since developers are not deploying, managing, or scaling servers when using serverless, organizations are able to abandon infrastructure administration. This dramatically decreases operational overhead. Serverless is highly compatible with a microservices architecture, which entails significant agility benefits as well.

Billing model – When using serverless platforms, you pay only for the compute that you need. Serverless architecture introduces a true pay-per-usage model, where customers pay only when a function is executed. Serverless’ billing model makes it ideal for microservices that have small load requirements and for applications with a “spikey” traffic profile. Unlike in traditional environments, there is no need to pay for VMs or containers that often sit idle.

Security – Serverless architecture provides security benefits. Because the organization is no longer managing servers, DDoS attacks are considerably less threatening, and the automatic scaling capabilities of the serverless functions help mitigate risk from this type of attack. Serverless also cripples attackers from targeting OS vulnerabilities and installing malicious software on the company’s servers.

Why serverless is the next big thing

Serverless computing isn’t just a niche solution for cutting-edge tech organizations. It is transforming the way developers deploy and manage complex software, and it has vast implications on how organizations deliver their applications. One interesting area of relevance is IoT applications, which involve billions of end-devices simultaneously using compute resources. With its cost savings and scaling efficiencies, serverless will be key to the mass adoption of such technologies.

Amazon, Google, Microsoft, and IBM already offer serverless platforms. As with many other cloud-related capabilities, Amazon was the pioneer, introducing AWS Lambda back in 2014, and it appears the company is bullish on the space. In April, at ServerlessConf in Austin, Tim Wagner, GM of AWS Lambda services, shared that AWS is seeing an increasing trend of enterprises adopting AWS Lambda services.

Other cloud vendors are seeing the future through the same lens. For example, Jason McGee, VP & CTO of IBM Cloud, has said IBM analysts predict the FaaS market will grow 7-10x by 2021. This statement is supported by a recent Markets and Markets report, which predicts the serverless market will grow from a $1.88 billion market in 2016 to $7.72 billion by 2021.

The public declarations we’ve heard from these vendors imply they are heavily invested in serverless, but this is not just an area of interest for prominent cloud vendors; we are already witnessing an entire ecosystem of startups emerging. 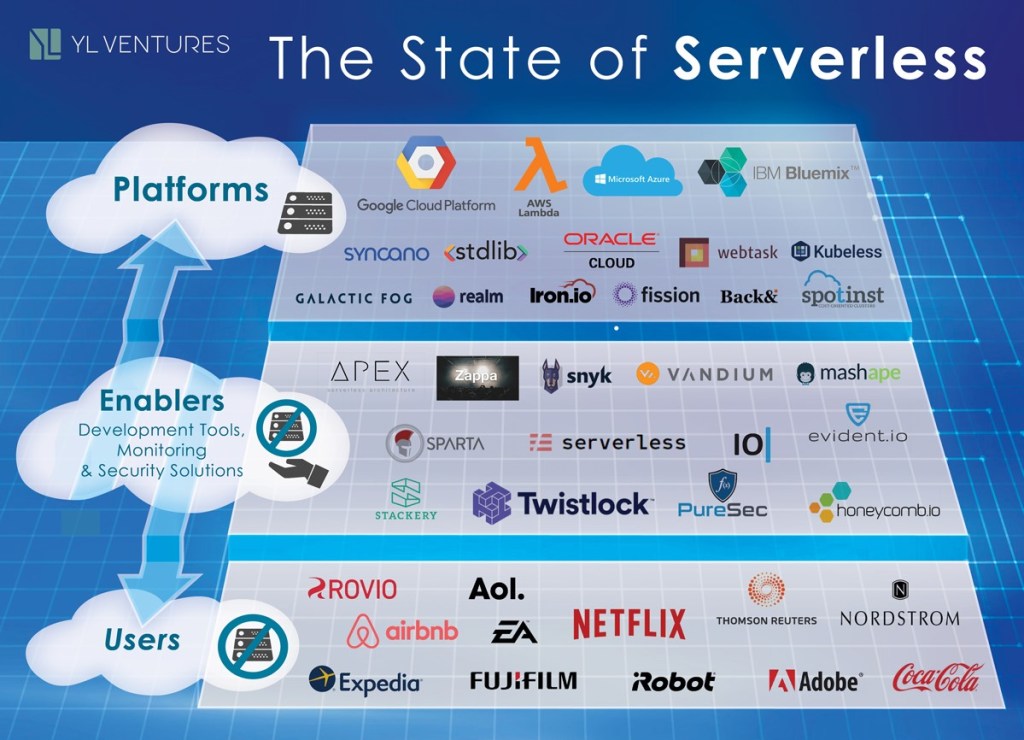 The serverless ecosystem, shown above, is growing in two areas:

Platforms – Alongside the big cloud vendors, an abundance of platforms and open source frameworks are emerging to give developers the ability to host, deploy, and run their serverless applications.

One example is Iron.io, which to date has raised $17 million, offering a serverless app platform where businesses can run applications on a public cloud, a private cloud, and even on premise.

Another interesting player is Auth0’s Webtask. The Identity-as-a-Service company offers a platform that supports a variety of integrations and allows developers to build applications without thinking about infrastructure.

Technology enablers – These solutions are enabling the adoption of serverless platforms and frameworks by providing easier usage and integration with serverless environments. Enablers include development and monitoring tools, as well as dedicated cybersecurity solutions.

An example of an interesting development tool is the open source solution Serverless, a provider-agnostic framework that allows developers to build, deploy, and operate serverless architectures on top of all leading cloud providers.

Another great mention is IOpipe, which provides tools for monitoring and debugging the performance of serverless applications.

Though we do, indeed, see security benefits in adopting serverless architecture, as happens with all emerging technologies, new security vulnerabilities will arise and need to be addressed. Twistlock is a growing company in this space. The cloud native security company, which has raised $30 million, offers security solutions for serverless applications using machine learning and advanced threat intelligence techniques. [Disclosure: Our firm is a seed investor in Twistlock.]

With a serverless approach, a company’s developers can focus more on writing code than on managing the operational tasks of an application. Netflix is a great example. Just imagine the infrastructure required to serve over 100 million subscribers around the globe, the cost of storage that goes with that, and the management of that scale of compute resources. Netflix is a known cloud user, and in 2016, the company announced it had completed its migration; the company is now 100 percent cloud based. Netflix is an outspoken advocate for AWS Lambda and is leveraging serverless technology for delivering media files, backups, instance deployments, and monitoring solutions. Other prominent organizations such as Expedia, Coca Cola, and Adobe have also joined the serverless wave.

Serverless is not operations-less. Operations is not just managing and scaling servers; it is monitoring, packaging, securing, deploying, and much more. While the context above outlines a very exciting space with many advantages, serverless is still in its infancy, and it presents some inherent challenges. These challenges present great opportunities for startups to build new and exciting solutions — for example, to innovate and address the following issues:

Vendor lock-in – Serverless features differ among cloud vendors. In addition, each vendor has its own flavor of integration points, configuration, etc. In order to switch vendors, customers will probably need to change their code, their operational tools, and maybe even their software architecture.

Performance – Service level agreements do not guarantee performance, and functions may take a long time to respond, especially in cases where it has been a while since their last invocation. This can be a deal breaker for many applications.

Serverless is already being adopted by established corporations around the globe, and it as a space that will provide many interesting investment opportunities. Expect to see the “State of Serverless” map above to expand significantly in the years to come, pushing a new wave of innovation.

Yoav Leitersdorf and Ofer Schreiber are Partners at YL Ventures. Iren Reznikov is an Associate with the firm, and Idan Ninyo is the firm’s Engineer in Residence.