Mark Zuckerberg’s “We’re making the camera the first augmented reality platform” was the most important step so far toward mass market AR. Where Pokémon Go gave many consumers their first taste of mobile AR, and Google Tango ushered in the race towards high end mobile AR phones, Facebook’s AR Platform now democratizes mobile AR regardless of hardware. Apple launching an AR enabled iPhone this year or next year could combine with Facebook to kick-start the mobile AR market at scale, and also be the final step towards the next great platform war. Consumers will win as usual, but there will be blood (as we detailed in Digi-Capital’s new Mobile Augmented Reality Report).

Hardware and software platforms are so intertwined that it can be hard to tell the difference, and this has played in Apple’s favor for the last decade. But Apple, Samsung and other phone makers have done such a great job with existing hardware, that this may backfire for mobile AR. Facebook’s AR Platform, for example, has shown exactly how the major social and messaging platforms can play the game using nothing more than a standard smartphone camera. So while device manufacturers roll out new hardware to build an installed base for AR phones, established and startup social/messaging platforms could build a mobile AR ecosystem and user base in a fraction of the time at a fraction of the cost. They’ll also be able to leverage this advantage as dedicated AR phones come to market. 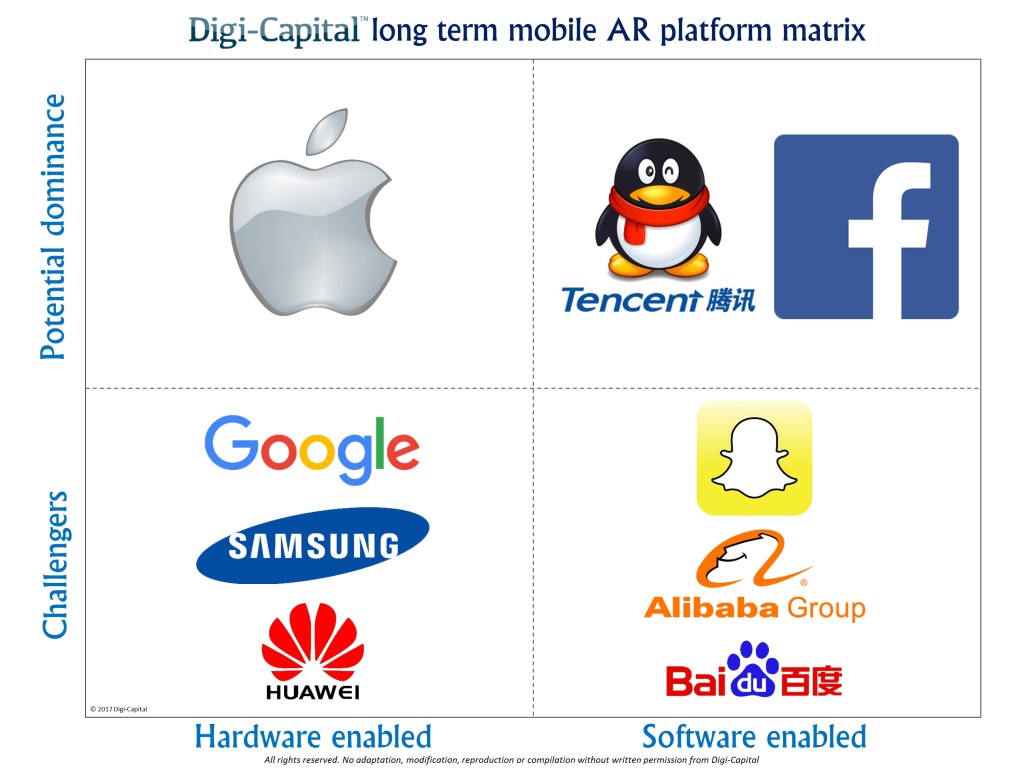 What is mobile AR anyway?

At one end Pokémon Go is what some industry insiders call “the best worst example of AR”, because its ambient mobile AR is pretty basic. Lovely graphics positioned approximately against the real world on your phone screen, using basic computer vision and positional tracking. Nonetheless it’s introduced mass consumers to mobile AR, and they’ve loved playing with it.

At the other end of the spectrum is Google Tango, with hardware based immersive mobile AR driven by integrated hardware and software. Without diving into the technical weeds, Tango phones enable accurate motion tracking, area learning and depth perception in a device that looks much like any other smartphone. The difference comes from a motion tracking camera, a depth sensing camera, an infrared projector, computer vision and Simultaneous Localization And Mapping software. So virtual objects superimposed on the real world appear as you would expect them to if they were really there. But Tango’s time is yet to come in terms of consumer awareness and app ecosystem (though Google, Lenovo and Asus are trying).

Facebook and Snap’s software-based immersive mobile AR is a serious contender, as it combines the ubiquity of ambient mobile AR with some of the computer vision and SLAM that previously required dedicated hardware. While Google Tango’s sensors enable heavier duty mobile AR apps, that’s not the problem Facebook and Snap are solving. By plugging immersive software based mobile AR into the largest consumer platforms on the planet, they’re democratizing mobile AR for everyone for free. And free is a good price point. This hasn’t escaped the notice of Tencent in China either. Mark Zuckerberg, Evan Spiegel and Pony Ma didn’t get to where they are by being dummies, and so it is with software based mobile AR.

There’s another factor in the democratization of mobile AR that Pokémon Go highlighted – demographics. Sixty-eight percent of Pokémon Go users are between 13 and 29 years old. Even though that came from a very specific set of circumstances, it is the largest sample set of mobile AR mass adoption to date.

Mobile AR will be adopted by the young. Platforms that can scale mobile AR with 13 to 29 year olds will win.

Tim Cook loves AR, but Apple has been characteristically enigmatic about its plans. We wrote back in January that Apple could launch an AR enabled iPhone this year or next year, with Samsung and others following. But until Tim Cook says “one more thing” about mobile AR, we really don’t know for certain. So let’s think this through.

For the last two years we’ve said that Apple is the best-placed of all major tech companies to drive AR, with its end-to-end ecosystem of hardware, software, app store, developers and retail. Combined with iMessage and its renewed push with stickers, an iPhone AR looks like a pretty compelling proposition.

But Apple has a problem: Apple.

Apple’s closed ecosystem is a huge advantage, but it’s also a weakness. Apple could provide the best and most complete experience for mobile AR, but only for folks who’ve bought a new iPhone AR. Apple expects users to replace iPhones every 3 years, which is a major driver of 200 million plus annual sales. But iPhone 7/7 Plus only makes up around two-thirds of the total. Assuming the iPhone AR is a range-topper that stimulates growth (converting Android users, reducing replacement cycles), we’re looking at an installed base of at first tens and then hundreds of millions of iPhone ARs in a few short years.

But Facebook Messenger has 1.2 billion MAU, WeChat has 768 million DAU, Instagram has 400M DAU, WhatsApp Status has 175 million DAU, Snapchat has 160 million DAU. This means it could take Apple well over 5 years to deliver the mobile AR reach Facebook and Tencent potentially have today. Marc Andreessen remains right – software is eating the world.

Do androids dream of tangoing sheep?

Samsung and Huawei are the largest Android phone makers globally (not forgetting Oppo and Vivo in China), and these two companies could drive the hardware based mobile AR market for the larger Android ecosystem. But Samsung’s S8 and Huawei’s P10 aren’t AR enabled phones, having neither Tango nor their own proprietary AR platforms. So as discussed in January, we’re looking at 2018 as the likely inflection point for Android hardware based mobile AR. There is also the Android ecosystem challenge of the separate Google Play dominating outside China, and a fragmented set of changing players ruling app stores in China. In other words, none of the Android hardware players has the dominant end-to-end mobile AR potential of Apple.

Sun Tzu’s “victorious warriors win first, then go to war” is a way of thinking about Mark Zuckerberg kicking off the mobile AR platform war at F8.

Facebook’s mobile AR Platform wins outside China. Its user base, platforms (Messenger, Instagram, WhatsApp Status), developer ecosystem, mobile AR developer tools, mobile market experience and financial muscle guarantee its success. Plus Mark Zuckerberg’s got something to prove, justifying his $3 billion entry into VR/AR in the first place (even if that was for a VR company). It’s a really smart move, and it’s going to pay off. Big time.

Tencent likely wins in China. The potential dominance of WeChat mobile AR when launched in China is as exciting as Facebook’s AR Platform outside it. The battle has already kicked off during Chinese New Year with Tencent’s versus Alibaba‘s mobile AR Hongbao (traditional red envelopes filled with cash). But the Alibaba opportunity looks very different, as it will be the AR eCommerce leader in China rather than the mobile AR platform leader. Baidu is also layering its wealth of data on the real world, but it too has a different opportunity to Tencent.

Apple could become the dominant and most profitable hardware enabled mobile AR player, scaling from zero to hundreds of millions of iPhone AR users by 2021. This could become the innovation for which Tim Cook is remembered, and potentially lead towards Apple’s long term smartglasses dominance going into the next decade (assuming smartglasses solve their 5 big challenges). Apple has been looking for a catalyst to take it beyond Steve Jobs’ legacy, and this could give it a real chance of becoming a 100 year company.

Samsung, Huawei and other phone makers could do very well when they start to sell AR phones, but don’t have Apple’s inherent ecosystem advantages. To do more than maintain the status quo, they might need to invest in or acquire totally new capabilities. Otherwise they could miss out on the profits others will make using their mobile AR phones.

Google’s Tango is currently geared to enabling a large open mobile AR ecosystem to drive its core search advertising and Google Play revenues, similarly to its current Android approach. However as with Baidu, the mobile AR opportunity to layer its data on the real world could improve its position.

Snap is already in the mobile AR business, even if it doesn’t call it that yet. But with a user base much smaller than Facebook/Instagram/WhatsApp Status and a closed platform, Evan Spiegel might think about copying Mark Zuckerberg for a change.

No dog in this fight

Microsoft still hasn’t announced any play for mobile AR. They’ve got massive assets in mixed reality (HoloLens) and VR (Windows VR), so it depends on whether they see themselves as a consumer or enterprise company long term. Steve Ballmer’s biggest regret is missing out on mobile. Hopefully mobile AR won’t become Satya Nadella’s.

Amazon has also stayed quiet on mobile AR, despite reports of experiments with AR stores. If they’re not already working on it, this might be an area where Jeff Bezos could learn from Jack Ma.

Know your enemy, know yourself

The battle lines for mobile AR have been drawn, and some of the winners were clear before the first shot was fired. While it’s not too late for incumbents and startups in mobile AR, again in the words of Sun Tzu, “I have heard that in war haste can be folly, but have never seen delay that was wise.”

Time to saddle up.