The global market for wireless audio devices — which includes products like Apple’s newly launched $229 Beats Pill+ Bluetooth speaker — is booming, and that’s largely thanks to smartphones.

In fact, it’s growing at about three times the rate of the smartphone market, which has seen a steady decline in important countries like China. (China now accounts for as much as 30 percent of total smartphone sales.)

The wireless audio device space could be worth as much as $38.5 billion within seven years — up from just $6.9 billion last year, according to a new report. That’s a compound annual growth rate (CAGR) of more than 24 percent between now and 2022.

By comparison, smartphones are expected to grow at a five-year CAGR of just over 8 percent between now and 2019, according to IDC. 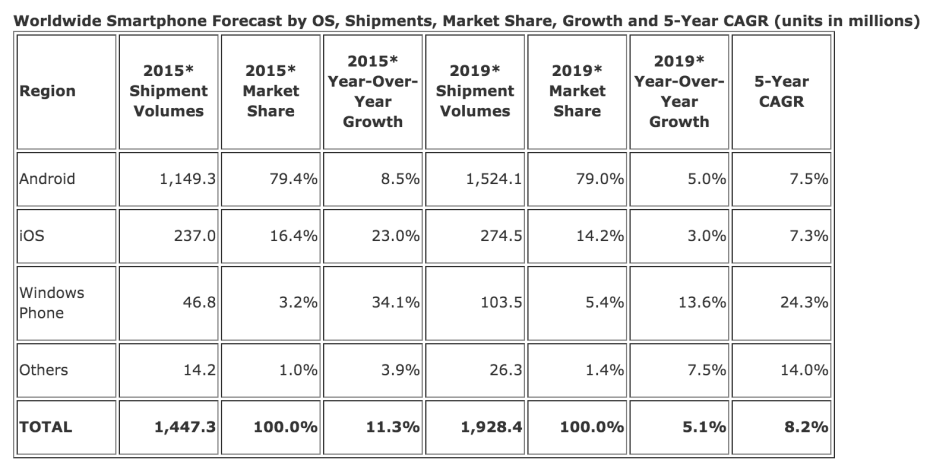 Above: Smartphone market projections between now and 2019. Source: IDC

The top players in the space right now include Apple (with its Beats brand, which it bought for $3 billion last year), as well as a handful of usual suspects: Bose, Harman, Sennheiser, Sony, and Philips.

Apple just revealed yesterday that it’s working to extend Siri search functionality to include Apple Music on the new Apple TV, effectively turning it into a voice-controlled, music streaming hub for consumers’ living rooms. While that always seemed like an obvious hole for Apple to fill, it now makes a lot of sense from a business perspective, based on latest the numbers.

“The persistent shift in application of portable devices such as smartphones, tablets, and multimedia devices is one of the key factors stimulating the demand for wireless audio devices globally,” Transparency Market Research said in the report.

While North America is leading growth in the space with around 29 percent market share, the Middle East, Africa, and Latin America are expected to “grow considerably.”

That’s a telling reversal in the trend from last year, which saw Europe and Asia Pacific leading global growth alongside North America.