Somewhere between sober despair and alcohol poisoning lies a land of infinite productivity and wizard-like programming skill. We call this land Ballmer Peak.

Late Thursday night, Microsoft announced the retirement of longtime CEO Steve Ballmer. Ballmer had led the company as its chief executive for 13 years, long enough to become the subject of an Internet meme and the namesake of a programming phenomenon: 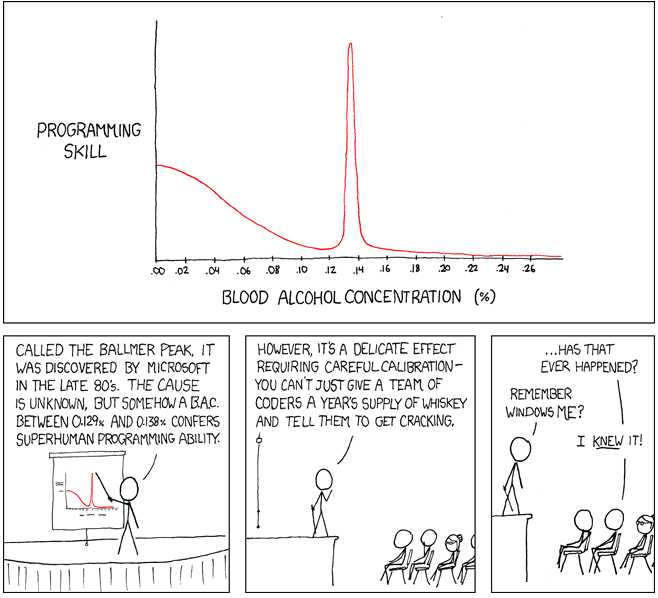 But in spite of financial successes (annual revenue soared from $25 billion to $70 billion) and groundbreaking UI work like Windows 8, Windows Phone, and Kinect, haters are hating hard, both in the blogosphere and in the public markets. You wanna see Ballmer Peak? Check out this graph:

That huge spike coincides exactly with the retirement news. Ouch! Overall, stock was trading up around 10 percent for the week.

You know what, Steve? Screw what the shareholders think. We think you did great. Good for you. Enjoy your retirement, buddy.

Moving on, this week also saw the launch of Google‘s latest mobile creation, the highly anticipated Moto X, a $200 device that manages to break new ground while still remaining unthreatening to the average consumer. Investor reaction was tepid, with stock fluctuating upward a mere 1.5 percent.

Facebook this week showed some business prowess by getting out of the ecommerce game to focus on its sweet spots: gift cards and virtual goods. The company also revealed just how strong is its grip on our identities. Investors loved the social network this week, pushing prices to a record high of around $40, up 9.3 percent for the week.

Amazon took a very public hit this week when its Amazon.com website went down for a grand total of 40 minutes. In that amount of time, the company lost around $5 million. Stock wiggled upward a tiny 2 percent for the week.

Finally, Google got bumped from its throne by our favorite comeback kid, Yahoo. The nerds over at comScore said Yahoo now bests Google as the highest ranked U.S. web property by unique visitors. The stock market did fairly well for Yahoo this week, with shares trading up around 2.5 percent.

Here’s a chart to show the fluctuations, representing percentage change only: