Turkmenistan flies fairly under the radar, as far as destinations go, but soon it will fly into space.

SpaceX was awarded a contract with Thales Alenia Space to launch the country’s first satellite into orbit. This satellite will enable Turkemenistan to operate a National System of Satellite Communications. The Turkmenistan NSSC will go into “geostationary transfer orbit” at the end of 2014 or early 2015 and expand its telecommunications abilities.

SpaceX was founded by startup superhero Elon Musk (the ‘real-world Tony Stark of our age‘) who also founded PayPal, Tesla, and serves on the board of SolarCity.  In 2012, SpaceX launched the Falcon 9 rocket carrying a Dragon capsule full of supplies, which became the first private unmanned spaceship in history to successfully attach to the International Space Station.

The long term goal is send humans into space, but SpaceX is starting out by sending other things, like cargo and satellites. The Turkmenistan NSSC will also travel aboard a Falcon 9 rocket, which has had three successful launches. The Falcon 9 is a “two stage liquid oxygen and rock grade kerosene powered launch vehicle.” SpaceX is also developing a new (and improved) breed of rocket called Merlin.

Space is a very exciting space right now (ha) and there have been number of developments serving to push space exploration forward, as well as “revolutionize access to space.” For the most part, governments were the only entities large enough to fuel space missions but Musk changed all that. Now organizations that don’t have the resources to build full space programs — like Turkmenistan — can turn to SpaceX for their galactic needs.

“We appreciate Thales’ confidence in our ability to safely deliver Turkmenistan’s first satellite to orbit,” said Gwynne Shotwell, SpaceX President and COO in a statement. “We are pleased to see the market expand with new entrants, and SpaceX looks forward to leveraging the world’s most reliable and advanced rockets for customers across the globe.” 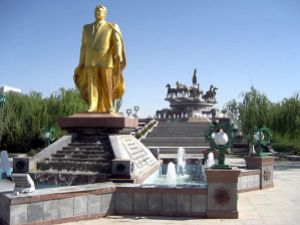 I took this opportunity to learn more about Turkmenistan. Its economy is powered by the export of a single commodity and it is has the world’s fourth largest reserves of natural gas resources. Most of the country is covered by a the Black Sand Desert and it part of the Soviet union for 69 years. According to Reporters Without Borders, it has the 2nd worst press freedom conditions in the world behind North Korea and is considered to be the third most censored country. Apparently, each broadcast under President Niyazov (pictured right) began with a pledge that the broadcaster’s tongue will shrivel if he slanders the country, flag, or president and the state owns all domestic media.

So not exactly on the top of my travel list (particularly as a journalist), but I do wish them the best of luck with their satellite.