Virtualmin is making it easier for web hosting companies to set up and maintain web sites, a process that can be mind-numbingly mundane and tedious.

The Mountain View, Calif. company offers open-source and commercial software designed to automate many tasks of modern web-based systems administration, like making sure the servers are running (sample below).

Less than a year old, the company now has over 500 web host providers using its software. As the number of new internet sites opening for business continues to grow, Virtualmin may be in the right place at the right time.

The two co-founders already know a thing or two. Jamie Cameron and Joe Cooper led development a successful open-source project called Webmin, which is now the world’s most popular web-based UNIX system administration tool. The software is downloaded more than two million times per year and is used by RackSpace.com, Lycos Europe, and thousands of other companies. They’ve both published books about it.

Virtualmin is the pair’s next-generation effort: In fact, the free, basic version of it is also open-source. The company’s core business is selling software licenses of its premium version to the hosting providers for web sites of small to mid-sized businesses. Customers include TextDrive (part of Joyent, which also hosts VentureBeat’s servers). It is competing against other system administration tools such as cPanel and Plesk.

The upgrade includes updates to some of the more than 70 other applications that it can also automatically install.

Virtualmin, a Y Combinator-backed company, is available for all major Linux distributions and Solaris: Red Hat Enterprise Linux 3, 4, and 5; CentOS Linux 3, 4 and 5; Fedora Core 4, 5 and 6; Debian 3.1 and 4.0; Ubuntu 6.06 LTS; SUSE and OpenSUSE 10.0; and Solaris and OpenSolaris 10. The company also plans to announce significant Ruby on Rails upgrades in the next weeks. 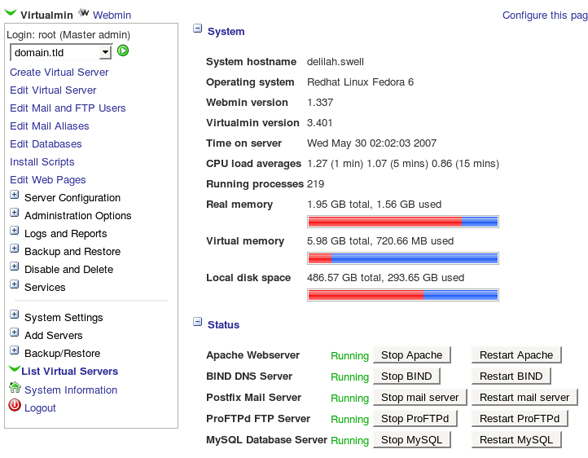