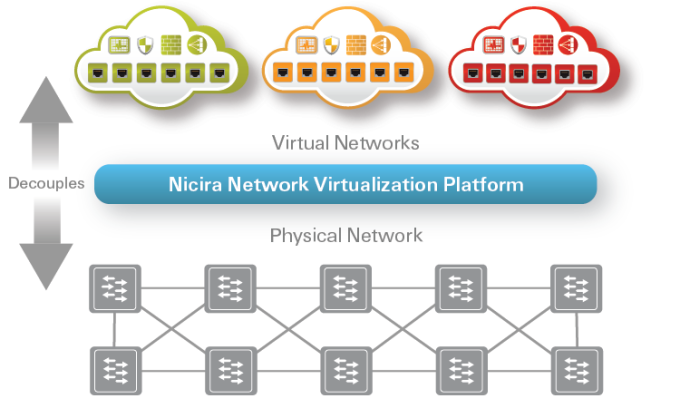 While VMware is a major player in data center virtualization, its purchase of Nicira is meant to make it a similarly large presence in software-defined networking as well. That’s a fancy way of saying it wants to take what it did to server virtualization and do it to network infrastructure.

Though most of the deal was for cash, VMware also offered $210 million in assumed unvested equity awards, a small price for what is sure to be a significant investment down the line.

Founded in 2007, Nicira was in stealth mode up until this February, but it’s already attracted attention from companies as large and diverse as AT&T, eBay, Rackspace, and DreamHost, which rely on its Network Virtualization Platform. With the technology, companies can scale their network capacity to keep up with demand, saving both effort and money.

Early Nicira proponent and Andreessen Horowitz partner Ben Horowitz applauded VMware’s buy. “VMware today [has created] a clear path to becoming the most important infrastructure company across servers, networks, and storage for the next 10 years,” he wrote in a blog post.

VMware’s move was particularly prescient, Horowitz notes, because it comes ahead of a future where networking and storage infrastructure will be more reliable and far more elastic. ” VMware just took a giant step towards bringing the future forward,” he said.

In an interview with VentureBeat, Horowitz’s partner Marc Andreessen agreed, noting the parallels between Nicira and VMware. “Nicira is to networking as VMware is to servers,” he said. “And a lot of companies are still kicking themselves for not buying VMware.”

But the Nicira buy is a bit different, because, unlike VMware, Nicira is in a league all on its own. “There’s really no other company like Nicira,” Andreessen said.

The move is also a big deal for Nicra co-founder Martin Casado, who has worked on the company’s virtualization technology for over 10 years. “VMware’s purchase is basically a validation of everything that Casado has been working on,” Adreessen said. “Few people believed that you could effectively decouple network software from the server, but that’s exactly what Nicira has done,” he said.

While the boards of directors of both companies have already approved the deal, it’s still subject to regulatory approval. Either way, VMware expects the deal to close before the end of the year.