Carpooling isn’t just a smart way to cut down on weekly expenditures. It’s also good for the planet: Sharing a car with coworkers, friends, or neighbors keeps 1,600 pounds of greenhouse gas out of the air each year. And if 100 people were to take advantage of a carpool every day, it’d eliminate 1,320 pounds of carbon monoxide and a whopping 2,376,000 pounds of carbon dioxide.

That’s one of the reasons Google-owned navigation platform Waze hopes to lower the barrier to entry. Starting today, it’s launching Waze Carpool, a ridesharing platform it hopes will one day eliminate traffic congestion — and by extension pollution — across the U.S. in all 50 states. The rollout follows successful pilot tests in Israel, California, Texas, Washington, Massachusetts, Illinois, and Nevada.

“Traffic is at an all-time high in the U.S., yet over 75 percent of commuters journey to work alone in a car,” Waze CEO Noam Bardin said. “Waze is in a unique position to help facilitate carpooling on a national level.” 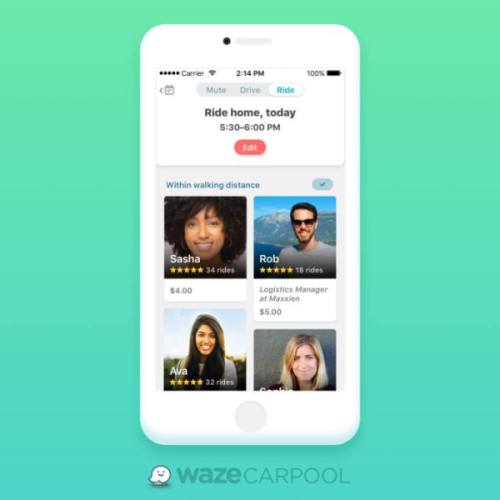 Here’s how it works: Within the Waze app, users choose a rider or driver based on their profile, star rating, number of mutual friends, and other filters, such as gender, coworker or classmate, and proximity to a preferred route. (Drivers manage routes through Waze Carpool, a companion app.) During rides, which can be scheduled up to seven days in advance, Waze provides real-time traffic updates and high-occupancy vehicle lane (HOV) routing and facilitates payments (through Google Pay) and reimbursements.

Waze pays drivers $0.54 per mile — the maximum IRS mileage reimbursement rate — to avoid commercial tax and insurance requirements. It says it has already begun to partner with cities, businesses transit agencies, and civic organizations on Waze Carpool, and to that end plans to make the service available at 50 Amazon Fulfillment Centers in the coming weeks.

Waze Carpool goes live in the Waze app for iOS and Android today, and new customers are eligible for $2 in credit for 21 days. Both Waze Carpool drivers and riders get $20 cash per referral, with a maximum of 10 referrals per person.

“By leveraging the Waze community and connecting the dots between how people are traveling and where they want to go, we can empower everyone to reduce the number of cars on the road now,” Bardin said.

The road to Waze Carpool’s stateside expansion has been long and winding.

The company first launched in Isreal way back in 2015, and its last major rollout in Brazil was delayed a year. The engineering team spent months retooling Waze Carpool for “the specific needs” of the Brazilian audience, a spokesperson told members of the media earlier this year, specifically by fine-tuning the in-app chat and call functions and improving the algorithms it used to match drivers and riders.

Despite bumps in the road, Waze forged ahead — and not without good reason. The global carpooling market is expected to surpass $11 billion by 2024.

Waze doesn’t currently charge for carpooling, but Josh Fried, Waze’s head of carpooling, offered a glimpse last year at what monetization might look like. In an interview with Recode, he didn’t rule out the possibility of in-app advertisements. 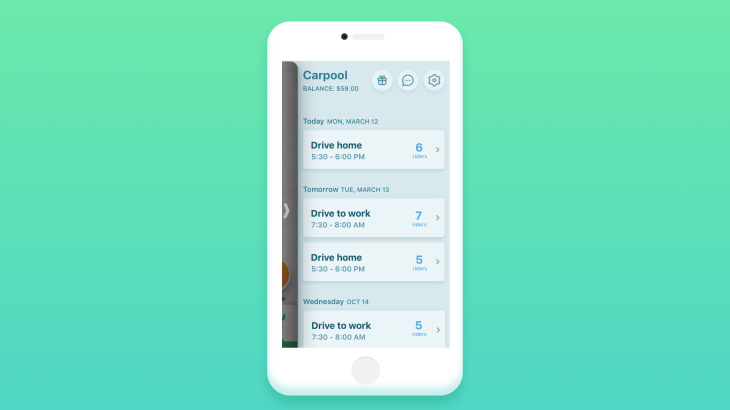 In any case, Waze isn’t exactly first to market — it faces stiff competition from the likes of Lyft Line, Uber Pool, and other well-established offerings. But Juan Matute, deputy director at UCLA’s Institute of Transportation Studies, claims Waze has got rivals beat in two respects: cost and footprint. A typical 30-mile ride in downtown Seattle would cost about $7 with Waze, compared to $50 on Uber Pool. And Waze’s users have already logged more than 15.5 billion miles in its app.

“Widespread carpooling that substantially reduces the number of cars on the road and therefore improves traffic has long been a challenge,” Matute said. “There are a lot of variables, but the most significant issues are around creating sufficient supply and demand simultaneously on a single platform. Waze is probably the only navigation platform that has the scale and mobile technology needed to make carpools work in the United States.”

Google acquired Waze — a startup founded by Ehud Shabtai, Amir Shinar, and Uri Levine 12 years ago in Tel Aviv, Israel, with the goal of creating a free digital database of the map of Israel in Hebrew — for $966 million in 2013.

There’s more to Waze’s service than crowdsourced road reports, of course. Waze users — or “Wazers” — can update roads, landmarks, house numbers, and other mapping information as they see fit, and other members of the community can verify the information, earning virtual points in exchange. Add-ons from the likes of Facebook and Foursquare — plus partnerships with services like Spotify — add additional functionality, including check-ins, notifications regarding nearby crime, and one-tap access to streaming playlists and radio stations.

Waze accesses local data sources — plus databases from startups like Waycare — to show fuel prices in real time. And it works closely with local governments through is Connected Citizens Program (CCP), a free data-sharing platform used by over 200 municipalities and departments of transportation for road analysis, road planning, and emergency workforce dispatching. Notably, in 2014 Rio de Janeiro tapped it for its traffic management system.

Today, Waze has more than 450 employees worldwide, roughly half of whom are based in Israel. The company plans to hire roughly 150 more for Carpool.