WhatsApp is updating a feature that allows you to control who adds you to group chats and is rolling it out to all 1.5 billion users around the world.

Anyone who relies on WhatsApp to communicate with friends, family, and everyone in between knows how easily people can add them to group chats without consent. This is why the Facebook-owned messaging giant in April introduced a feature that allowed some users to stipulate who can add them to a group.

Before today, the privacy setting had only been available in India, where the company has been fine-tuning the feature ahead of today’s global rollout. It’s worth noting that with more than 400 million users, India is a big market for WhatsApp, but it is also one that has struggled with the spread of incendiary messages and fake news. WhatsApp has previously tried to address these issues with stricter message-forwarding restrictions.

While the ability to avoid being added to random group chats fits into that broader narrative, the feature will likely have global appeal, as its granular privacy controls may help reduce spam.

To activate the new feature, head to Settings in the updated app — which should be rolling out to everyone from today — and go to to Account > Privacy > Groups. There are three options here: “Everyone” does as it suggests and allows you to accept group chat requests from anyone who has your mobile phone number. “My contacts” limits invites to individuals in your address book. And “My contacts except …” allows you to blacklist specific people. 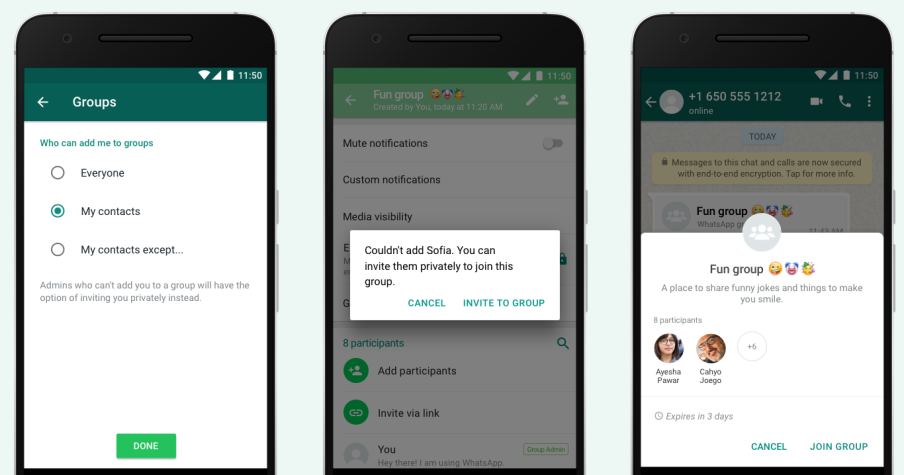 Above: WhatsApp now lets you control who can add you to a group

This is slightly different from the inaugural launch in India, when the feature gave users a “Nobody” option instead of “My contacts except …,” but the update here is probably more useful, as it affords users greater control. There is also a “Select all” option that has the same effect as the original “Nobody” toggle.

Anyone who doesn’t have permission to add you to a group chat has to send you a personal invite, which you are free to accept or decline.